How does a seismometer work?

An instrument sensitive to tiny movements in the ground

A seismometer is a device that is sensitive to vibrations. It works on the principle of a pendulum: a heavy, inert mass with a certain resistance to movement (i.e. inertia) due to its weight is suspended from a frame by a spring that allows movement. The energy from any seismic activity excites this “proof mass” as it is called by geophysicists, making it vibrate.

What actually moves? That depends on your point of view!

This view of a mobile mass is valid if you consider that the frame to which the mass is attached—and which is firmly fixed to the ground—does not move. However, when a quake occurs, or a tremor is produced by any kind of shock, it is actually the ground—and therefore the frame attached to it—that moves!

If you change your viewpoint and look at the mass, we may consider that when a tremor occurs, the mass—which has inertia because of its weight—will only move after a certain time, whereas the frame will move in keeping with the ground motion.

In addition to the mass, the spring and the frame, a seismometer needs a device to constantly record the motion of the mass relative to the frame. This is a central part of the seismic sensor and the difference between seismometer technologies, as some measure the speed of the mass and other its displacement. In both cases, the recording that shows ground motion over time is known as a seismogram.

An even simpler technique to represent this signal consists in attaching a pen to the pendulum. The pen touches a roll of paper wound around a rotating drum. This is known as a seismograph, an instrument which directly plots the signal rather than recording it in digital form. 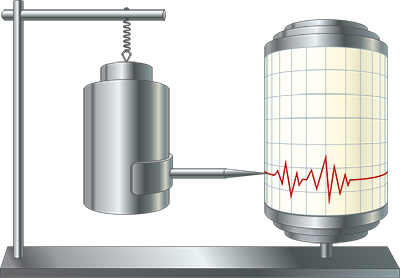 Principle of operation of a seismometer (© Adobe Stock).

The first seismometers developed were based on a simple pendulum in which the moving mass is suspended vertically from a frame.

To increase sensitivity, this type of device was then mounted upside down, which is why it is known as an inverted pendulum. In this case, the pendulum’s centre of mass is above the pivot point.

Unlike the first design, this assembly is naturally unstable and the least disturbance will make that mass leave its point of equilibrium and move left or right as gravity attracts it downwards.

The inherent instability of an inverted pendulum nonetheless is what makes this device react to the slightest movement, however small. As you will see later, the InSight spacecraft’s SEIS instrument is based on the inverted pendulum principle.

The seismometer provides data as a seismogram, which is a recording of the magnitude of ground motion over time while regularly measuring the offset between the position of the mass and the frame to which it is attached, in relation to an equilibrium position i.e. when the device is at rest in the absence of any seismic activity.

Historically, the first seismograms were produced by basic means: a metal needle attached to a mobile mass left a track of its movements on paper covered in soot. Later, the needle was replaced by an ink pen that recorded movements on a rotating roll of paper. Nowadays, in the digital age, seismometers provide digital signals recorded by computers. The seismometers flown to the Moon by the Apollo missions were among the first of this kind, because even in the early 1970s, most seismic stations on Earth were still fitted with seismographs.

The role of modern sensors is to follow the motion of the mass, and they can take three types of measurement: changes in the position of the mass relative to its “zero” equilibrium position (displacement), speed of the mass (i.e. motion over time), and finally a variation in speed over time (i.e. acceleration or deceleration). 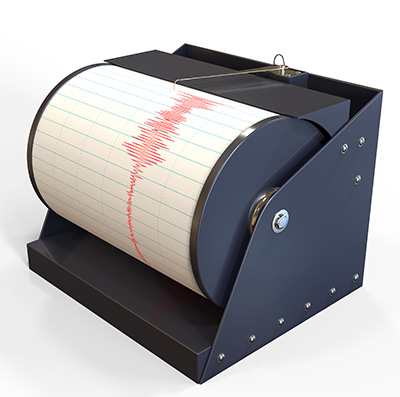 As ground motion occurs in three-dimensional space (along the vertical axis or two horizontal axes), displacements need to be recorded using three separate pendulums. This is the only way that seismic activity can be comprehensively documented.

The SEIS instrument designed to fly aboard InSight to Mars is a three-axis seismometer. An interesting detail is that the three axes of the seismometer are not aligned with the horizontal and vertical, which would perhaps be “logical”.

Although each of SEIS’s three axes is positioned at a 90° angle to the others, the whole assembly is inclined by approximately 30.5° with respect to the horizontal axis. There are many, sometimes complex, reasons for this but to simplify matters, let us just say that such a configuration minimizes the effect of noise.

The sensitivity of a seismometer depends on the relationship between the seismic signal that you wish to record and the various disturbances that interfere with this signal. This “noise”, which can go as far as preventing measurements, is similar to the snow effect you can see on a television screen.

The 30.5° angle of InSight’s Very BroadBand (VBB) pendulums corresponds to an angle where the vertical component is measured with the best sensitivity relative to the instrument’s own noise. Tipping it towards the horizontal axis would reduce the amplitude of vertical acceleration, while tipping it away would increase the instrument’s self-noise, with increasing oscillation leading to a loss in long-period sensitivity.

One of the issues to face when using a seismometer is how to ensure that it can optimally monitor a vibration even when the vibration lasts a long time, from minutes to hours.

Seismometers are by definition extremely sensitive, recording all that is going on around them whether seismic or not. However, the slightest drift of any kind can prevent a seismometer from continuing to monitor and plot a vibration, especially if the latter is a long-period event (the recording of short-period events being easier to handle).

Geophysicists attach great importance to the way seismometers are set up. However sensitive an instrument is, it will only give good results if it is set up correctly.

Seismometers are generally placed on very hard surfaces such as granite or concrete slabs. The surface must be as flat and as horizontal as possible.

Ideally, the place chosen must be quiet. It is not a good idea to set a seismometer up next to a road or near an underground railway station. Temperature is also very important. It must be as stable as possible, as any variation may affect the seismometer mechanics, especially the force generated by the spring on the mass.

On Earth, seismometers are preferably set up in the pits or shafts of former mines, hundreds of metres below the surface. These are good locations as they provide ideal operating conditions.

The sources of interfering noise, which propagate very easily near the surface (such as the continual hum of human activities, the constant roar of the oceans, and atmospheric turbulence), are reduced as far as possible. As for temperature, it is incredibly and naturally stable. The quietest site in Europe is in the Black Forest, in the workings of a former mine. The temperature there only varies by a few thousandths of a degree per year!

Once in an ideal location, a seismometer can feel and monitor any seismic wave, whether very short or, on the contrary, lasting a matter of minutes or even hours.

A seismometer is designed to record seismic waves. On Earth, these waves are mainly caused by earthquakes that regularly and sometimes forcefully shake certain parts of the world, causing major damage depending on the amount of energy they carry.

Apart from major earthquakes that make newspaper headlines, the Earth’s surface is constantly subject to very small movements that we do not detect but which are revealed on seismograms.
Our planet can actually act like a bell, and when certain events occur, can even resonate in rhythm. The Earth then produces its own music, a telluric melody imperceptible to our ears but able to be picked up by the most sensitive seismometers.

Whether the seismic waves have been released during major seismic activity that shakes certain regions of the world or whether they are just due to the imperceptible oscillations of our planet, geophysicists use every opportunity to broaden our knowledge of the Earth’s interior.

A seismometer is rather like a doctor’s stethoscope. By determining the way that seismic waves propagate within our planet, depending on how they are reflected or refracted by the materials making up the planet’s interior structure, whether rocks or metal, it becomes possible to construct an image.

When it is necessary to study a particular sub-surface area when prospecting for oil, for instance, you cannot always count on an earthquake at the right time. Seismic activity does not occur on demand.
There are two solutions in this case: either you listen for long periods of time in the hope that seismic activity will generate seismic waves as input for the seismometers (this is the solution chosen for the InSight mission, which will last two Earth years), or you create your own vibrations. The first is known as passive sounding, the second as active sounding.

On Earth, oil prospectors regularly create artificial seismic waves using various means, from exploding dynamite to triggering air guns or using trucks fitted with heavy vibrating plates. This technique was also used on the Moon. Explosive charges were triggered to create seismic waves that were then recorded by geophones set up on the surface by the astronauts of the Apollo 14, 16 and 17 missions.

In the space sector, geophysicists have many entertaining ways of making noise: they can deliberately send the upper stage of a rocket on a collision course once it has finished its useful life or, along the same lines, crash an obsolete spacecraft into the surface of a planet.

On Mars, these somewhat brutal techniques cannot be applied because scientists wish to avoid contaminating the surface with objects that have not previously been sterilized. InSight and the SEIS instrument will have no other choice then but to count on their luck of the draw, even though the penetrator of the Heat Flow and Physical Properties Package (HP3) will be used for a small active seismology experiment, not powerful enough to sound more than a few dozen metres below the Martian surface.