Seismic activity produces different types of seismic wave, each of which has its own particular characteristics.

What is a quake?

A quake is a geological event during which mechanical stresses of varying magnitudes within a planet lead to a break in rock, suddenly releasing energy.

A significant part of this energy is carried by seismic waves, which will propagate in all directions within and on the surface of the globe. 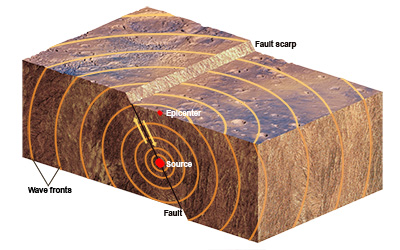 Formation of a seism (© IPGP/David Ducros).

These waves are like the ripples you make when you throw a pebble into a pond: they form at a single point then spread out over the surface, creating ripples of gradually decreasing height (amplitude). When a quake occurs, similar ripples appear around the focus. However, unlike our example, they are not limited to one plane but spread out in all three spatial dimensions.

The wavefront generated by a tremor immediately meets rock, which then temporarily deforms. Once the seismic wave has passed, the deformed material returns to an equilibrium state. Near the source, this state may be different from the pre-quake state because of the deformation created by the fault. Further away, however, the equilibrium position of the materials is almost the same as before the tremor. Geophysicists consider this reversible deformation “elastic”. 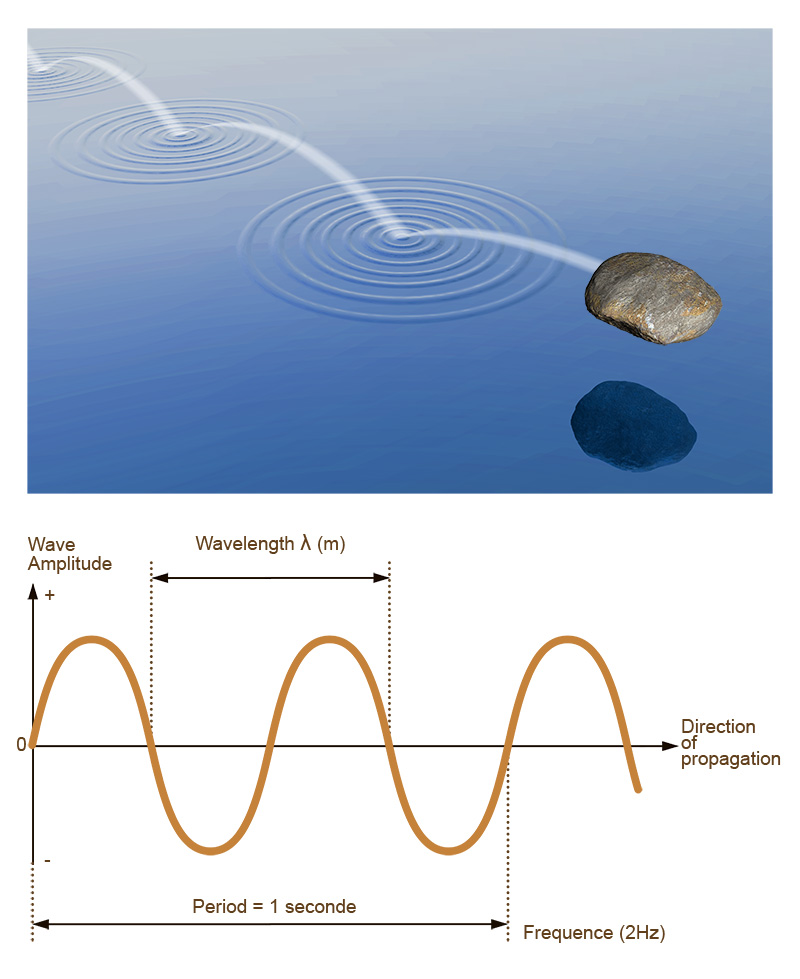 Seismic waves are divided into two main types: those that travel within the planet, and which are capable of crossing its whole breadth (even through a metallic core); and those that travel along the surface and do not seek to penetrate the subsurface. 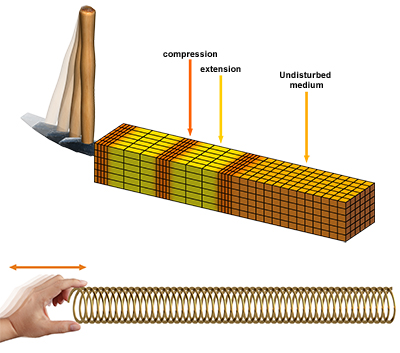 Principle of propagation of a P wave (IPGP / David Ducros).

Body waves, capable of propagating through the interior structure of a planet like Earth or Mars, are divided by geophysicists into two types: P-waves (primary waves), which are the first to reach seismometers when there is a quake, and S-waves (secondary waves) that come after the P-waves and therefore reach seismic stations second.

P-waves always reach seismometers first simply because they travel quicker than S-waves. They travel at speeds of around 6 to 14 kilometres per second on average, and can cross any material, whether solid or liquid. The denser the material, the faster they travel. They slow down when the material is less dense, which is the case near the surface.

S-waves are slower than P-waves (around 4 to 6 kilometres per second on average), and cannot cross through liquid. The Earth’s outer core, which is molten metal, is therefore an impenetrable barrier for them.

By measuring the speed of P- and S-waves resulting from a tremor, and by calculating the time between the P-wave wavefront and the S-wave wavefront reaching a given seismic station, it is possible to estimate the distance between the station and the seismic focus. By combining data recorded by at least three seismic stations, the epicentre may also be located with greater precision. 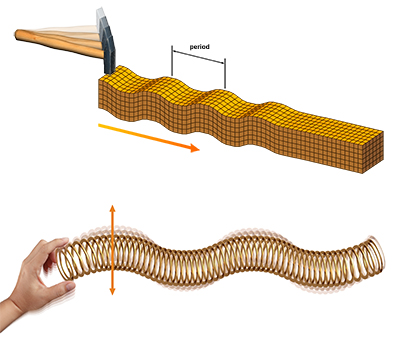 Principle of propagation of a S wave (IPGP / David Ducros).

P- and S-waves do not deform rocks in the same way. When a P-wave wavefront hits rock, the rock compresses then extends before returning to its initial shape.

This cycle of expansion/compression to which rocks are subject is parallel to the direction in which the wave is travelling. Once the wave has passed, the material returns to its original shape. The effect of the propagation of a P-wave is easily observed by extending then releasing a spring (mind your fingers!). The wave that travels through the rings of the spring is a compression/expansion wave, which explains why P-waves are known as compressional waves.

S-waves, on the other hand, are shear waves that vibrate the ground perpendicular to their direction of travel. To simulate an S-wave, just shake a blanket or rug to get rid of the dust: S-waves are just like the wave that ripples along the rug when it is held by two hands at one end then shaken. 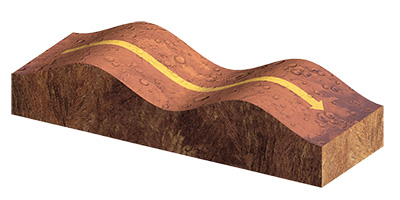 Principle of displacement of a surface wave (© IPGP/David Ducros).

The second type of wave is known as a surface wave. As their name suggests, these waves only travel along the ground, on the surface. They are slower than the body waves we have already looked at (only up to 4 km/s on average), but have a greater amplitude. They can cause absolute havoc on their path, and are responsible for the mass destruction that often accompanies violent earthquakes. 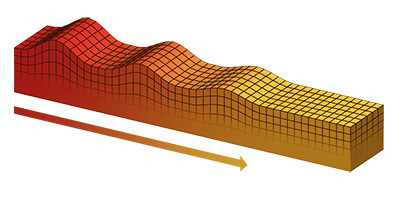 The motion of Rayleigh waves is quite complex. On Mars, SEIS will use these waves to locate quakes, a feat impossible for a single seismic station waiting to record body waves.

Unlike its counterparts on Earth, which form part of a large network made up of thousands of seismic stations, the SEIS seismometer placed on the Martian surface by InSight will be all alone on the Red Planet. Thanks to Rayleigh waves, and especially those with enough energy to travel all the way around the planet, SEIS will be able to determine the propagation speed without needing to know the exact position of the tremor. The strategy involves detecting the first arrival of the surface wave, then measuring it again after it has been once around the planet. The circumference of Mars is known, so the difference between the two arrival times will be used to calculate the propagation speed of the surface Rayleigh wave.

Surface Love waves are rather like a simpler version of secondary body waves, i.e. S-waves. On Earth, Love waves are responsible for most of the damage caused by violent earthquakes. The way they travel makes them particularly apt to destroy buildings not designed to withstand seismic activity.

Seismic waves are not only divided into body waves and surface waves, but also by their period, which can be long or short.

To understand this concept, we can imagine a seismic wave like a wave rippling through the ground. When the wave arrives, the surface of the ground is deformed and rises until it reaches its maximum amplitude, after which it descends again until it returns to its initial level and flatness.

For a short-period wave (that geophysicists also call a high-frequency wave), the rise and fall will occur quickly, for example in less than one second. Faced with a long-period wave (or “low-frequency” wave), on the other hand, the ground will rise slowly (taking around a minute, for instance), then descend just as slowly (again around one minute).

To accurately measure these two types of wave (long- and short-period waves), geophysicists use seismometers that are geared to each type. The more sensitive a seismometer is to a wide range of periods, the higher its bandwidth. Seismologists then call this kind of instrument a “broadband” seismometer.

In order to maximize scientific information, the InSight mission’s SEIS instrument contains two types of seismometer. One, which constitutes SEIS’s central hub, is a very broad band (VBB) seismometer. Particularly sensitive to long-period waves, the VBB seismometer is coupled to a short-period (SP) seismometer, thus extending its range to shortwaves.

Seismic waves are of great benefit to geologists. Just as doctors use a stethoscope to listen to the activity of a patient’s internal organs, or an ultrasound scan to see the image of a baby in its mother’s womb, so listening to Earth’s vibrations by a dense network of seismometers provides a way of piercing Earth’s inner secrets, inaccessible by any direct means.

The seismic waves produced by a quake behave like rays of light. When they hit a given environment, they can be reflected in a different direction, like bouncing off a mirror, or refracted which means that they are both deviated and slowed down.

Created at the heart of a quake—the “focus”—seismic waves will spread out in all directions and follow trajectories that are complex to a greater or lesser degree. Depending on the geological structures that they meet on their journey—and that may be considered as obstacles—they will arrive at the multiple seismic stations worldwide at different times.

By carefully analysing the data collected, geophysicists can track their journey and understand what they came across as they travelled through the Earth. This is how it was discovered that Earth is not the homogeneous rocky ball that people imagined, but has a complex interior structure made up of—from the centre out—a metallic core, the outer part of which is liquid, a partly molten mantle and a very thin rocky crust.