The SEIS seismometer’s commissioning on Mars

The SEIS seismometer’s commissioning period, which began once the wind and thermal shield (WTS) had been placed in position on Saturday 2 February 2019, ended on 5 April 2019. During this period, several crucial operations were successfully carried out on the seismic sensors, and especially the VBB pendulums.

Thermal stability: the WTS offers SEIS a haven of peace 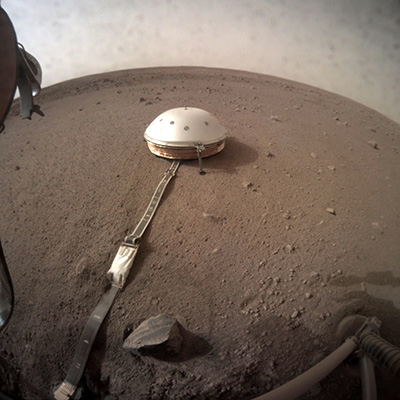 The WTS’s positioning over SEIS during sol 66 kicked off the seismometer’s commissioning phase, starting with measurements of thermal stability under the dome (© NASA/JPL-Caltech).Once the WTS had been placed over SEIS during sol 66, project engineers immediately wanted to check the thermal stability it was designed to provide. To define the range of thermal stability offered by what could be considered a “portable seismic vault”, it was decided to temporarily switch off the heaters designed to protect the seismometer during the coldest (night-time) hours of a Martian day. Models had indicated that, protected by the WTS, temperature variations would be small enough to be able to switch off the heaters for a few days without risking damaging the instrument. The analyses carried out by the heating engineers demonstrated that the WTS was fulfilling its protective role perfectly.

Thanks to the additional thermal protection afforded by the WTS (which is actually the last in a whole series of protective devices, including the titanium sphere hosting the VBB pendulums, the remote warm enclosure box (RWEB) and the TCDM close to the pendulums), on sol 70 the SEIS instrument’s six sensors were switched on continuously for the first time on Mars.

The SEIS instrument’s VBB pendulums are fitted with a mechanism specifically defined for Mars (and not found on terrestrial seismometers). The TCDM’s role is to reduce as much as possible the remaining temperature variations in the vacuum-sealed sphere that houses them. The TCDM is an ingenious mechanism that passively changes the pendulums’ centre of gravity depending on temperature variations. It relies on the principle of the differential dilation of two different metals that elongate or retract (rather like an accordion) as the temperature changes inside the sphere. To mitigate the effects of temperature changes, the TCDM must be precisely positioned. 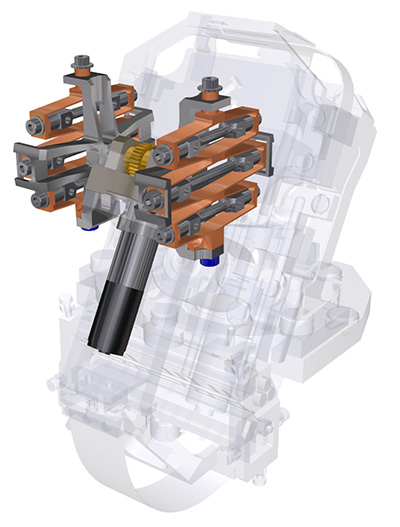 TCDM for the VBB pendulums. This mechanism was adjusted during sols 77 and 81 so as to minimize the remaining temperature variations to which the sensors are inevitably exposed in their evacuated housing. The mechanism is adjusted by rotating the thermal compensation devices, two small copper-coloured components that look rather like ears (© IPGP/David Ducros).During sol 77, project engineers performed an initial adjustment of the TCDM so as to minimize the thermal sensitivity of each pendulum independently of one another. This was one of several options, including reducing the noise in a certain frequency bandwidth, or adjusting the sensitivity of all three pendulums together. The TCDM of VBB pendulum #1 was turned -5°, that of pendulum #2 +20°, but that of pendulum #3 was left in its resting position (0°).

After analysing the effects obtained, further adjustments were made during sol 81 (+1° for pendulum #1, +22° for pendulum #2 and +2° for pendulum #3). Following these changes in position, the results were considered satisfactory by the performance engineers as this manipulation increased the gain in science mode. The VBB pendulums can in fact operate in two modes—engineering mode (which is robust but not very sensitive) or science mode (a more precise mode but with a higher risk of sensor saturation)—with different gain levels. With the TCDMs adjusted, the VBB pendulums can now operate at their highest level of seismic sensitivity.

Calibrating the VBB pendulums was another key step in commissioning the SEIS instrument. This step, which is vital in order to correctly interpret the data provided by the instrument, consists in artificially generating a series of vibrations using the biggest outer coil of the feedback system, and observing the pendulum’s reaction.

An initial calibration phase was carried out during sol 77, in engineering mode (high gain) at a given temperature. A second calibration step was then taken between sols 85 and 93 in science mode and pendulum by pendulum. Three different temperature values were used for this calibration: daily minimum, maximum and mean. Calibration operations were also carried out on the SP sensors in early February.

In addition to the calibration itself, two fundamental parameters for the VBB pendulums were determined for the first time on Mars and compared using the same method used to compare values recorded on Earth. These two parameters are the “natural frequency” (i.e. the frequency at which the pendulum oscillates naturally, and which must be the lowest possible) and the quality factor (i.e. the rate of damping, which describes the time taken for the pendulum oscillations to die out after a given excitation).

The last step of the SEIS seismometer commissioning process consisted of an absolute calibration by changing the length of the levelling cradle legs by a known value to tilt the seismometer and note the resulting effects, and in particular any differences between the SP sensors and the VBB pendulums.

Monitoring the HP3 mole as it burrows down into Mars

The first attempts of the Heat flow and Physical Properties Package (HP3) at penetrating the Martian soil during sols 92 and 94. The mole’s progression downwards through the sub-soil was probably stopped by a rock or a gravel layer near the surface, though it could be that a change in inclination caused the metal cylinder to become stuck in the surrounding tube (© NASA/JPL-Caltech).During the same period as the calibration operations, the SEIS seismometer also began listening to the vibrations caused by the HP³ mole as it headed down through the Martian sub-soil during sols 92 and 94. Unfortunately it came to a halt quite quickly. The mole’s progression downwards was probably stopped by a rock or gravel layer, but given the change in inclination of the surrounding tube due to the resistance encountered, it is possible that the penetrator is now mechanically blocked in the tube.

The data collected showed that the SP sensors of the SEIS seismometer, well-suited to high-frequency measurements, record a variety of information—not only on the penetration operations but also on the mole’s internal operation. The signals are so strong when the mole begins hammering that the VBB pendulums saturate.

To try to see what is preventing the mole from descending into the depths of the Martian sub-soil, a third short penetration sequence lasting 10 to 15 minutes will be scheduled soon for HP³.

The objective of the SP sensors is to determine as accurately as possible the arrival time of the signals generated by the complex movements of the mole’s various moving parts whenever it hammers to move forward. A dedicated digital filter will be uploaded to the eBOX electronics unit that controls SEIS to increase the temporal resolution. Depending what the SP sensors hear, the project engineers will know whether the mole is continuing its downward journey (even slowly), if it is just bouncing off something in its path, or if it is completely blocked.

A second digital filter will also be activated to prevent the seismometer’s ultrasensitive VBB sensors from saturating when HP3 uses its hammering mechanism. By analysing the difference in seismic wave propagation depending on the materials encountered, it may be possible to identify the presence of a very hard layer some 30 cm deep.

Spread over 62 sols, the SEIS commissioning phase successfully tested all the instrument’s subsystems and mechanisms. The segments and processes used to downlink the data (continuous stream and high-resolution data on request) and uplink command sequences were also validated. This extremely satisfactory audit led to the official start of SEIS’s scientific campaign on 5 April 2019 for one Martian year. On Elysium Planitia, everything is now ready for InSight’s geophysical station to detect the first “marsquakes”, and thus reveal the Red Planet’s internal structure.