Finding the true north on Mars

Despite the incredible complexity of Martian probes that have landed on Mars, it is by no means easy to find the Red Planet’s geographic north! To obtain the accuracy required of SEIS during its operation, seismologists need to know exactly where it is located and which direction it is facing following its deployment on the Martian soil by InSight’s robotic arm, the IDA, on 19 December 2018. However, a conventional compass is useless on Mars. 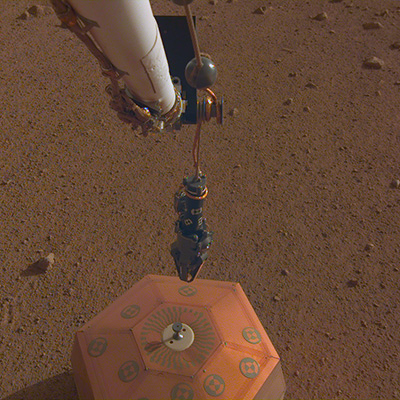 The SEIS seismometer’s sundial as seen by the robotic arm’s instrument deployment camera (IDC) during sol 25. Note how the gnomon casts a shadow on the reference pattern (i.e. The “dial” part). This picture was taken a little before 16:00 local Mars time (© NASA/JPL-Caltech).

Unlike the Earth, Mars no longer has a global magnetic field. In 1997, during its aerobraking manoeuvres, NASA’s Mars Global Surveyor probe detected some magnetic activity on the Red Planet, but it proved to be remanent magnetism. Many of the oldest regions of the planet, in the southern hemisphere, bear traces of a global magnetic field, but this magnetization is a mere shadow of what it was.

Analyses of the magnetic vestiges frozen into the Martian crust show that the Martian magnetic field faded away some 4 billion years ago, though we do not yet know why. Indeed, the disappearance of the magnetic shield that protected Mars from the harmful effects of solar and cosmic bombardment remains one of the major mysteries surrounding the Red Planet—a mystery that the InSight mission should clear up.

From a more practical point of view, the absence of a global magnetic field on Mars is a major problem when you need to know which direction you’re facing: Mars obviously does not have a global satellite navigation system like those available on Earth! So how do we find north on Mars? Rather paradoxically, scientists are going to use an ancestral technique, as they will use a sundial transformed into a compass.

In ancient Babylonia, people used the shadow cast by a stick pushed into the soil to determine the time of day. Several dozen centuries later, InSight will use this same technique on the Red Planet. At the top of the copper-coloured hexagonal RWEB that surrounds the SEIS seismometer is a reference pattern, at the centre of which is the carrying handle used by the robotic arm’s gripper to place the instrument on the ground. This handle also acts as the sundial’s gnomon.

At the top of the RWEB surrounding the SEIS seismometer is the carrying handle that also acts as the sundial’s gnomon. The shadow cast on the reference pattern will reveal the Sun’s direction and height in the sky, thus indicating Mars’ geographic north (© IPGP/David Ducros).

There are three distinct areas on the reference pattern making up the “dial” part of the sundial: the outer concentric circle is made up of 72 sectors spaced 5° apart, thus covering 360°. The middle circle has the same number of sectors, but they are spaced 2.5° apart. The inner circle is also made up of 72 sectors 2.5° apart but offset with respect to the middle circle.

SEIS’s gnomon, 28.7 mm tall, is a small conical cylinder ending in a half-sphere. This unusual shape was designed with its main function in mind, i.e. to be grabbed by the gripper attached to the InSight lander’s IDA. It is not, however, an ideal design for reading the shadow it casts. Its shape was cleverly adapted, however, so it could properly play its second role as a gnomon. The solar compass assembly was designed by David Mimoun (ISAE/SUPAERO) and Ken Hurst (JPL), then developed by Nicholas Onufer and Michele Wallace (JPL).

The position of the shadow cast by the gnomon, which will fall on different sectors of the pattern depending on the time, is used to determine the Sun’s height and direction (azimuth) in the Martian sky, and thus deduce the local Martian time. Although very simple, InSight’s sundial can also provide other vital information. Independently of the levelling cradle inclinometers, it can thus be used to determine the inclination of the seismometer with respect to the ground and, more importantly, determine its orientation with respect to geographic north (which is vital in order to interpret the seismic signals).

The SEIS sundial will only operate for a brief period on Mars, because not long after its deployment, the seismometer will be covered by the wind and thermal shield, WTS. 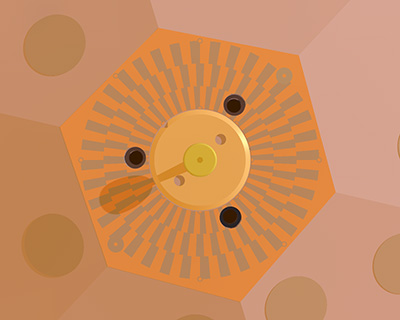 Digital simulation of the SEIS seismometer’s reference pattern and gnomon. The three concentric circles may be seen, each offset by 2.5° and made up of 72 sectors. The small circles on the bottom right and upper left outside the reference pattern itself are used to correct the parallax error in the IDC’s image (© Marc Goutaudier).

To precisely determine the Red Planet’s geographic north, and thus the orientation of the SEIS seismometer, several pictures will be taken of the sundial at exact times by the InSight robotic arm’s instrument deployment camera (IDC). One image will be taken at midday, and another when the Sun is lower on the horizon, when the shadows cast are longer. One of the world’s leading experts in sundials, Frenchman Denis Savoie, made a special trip to NASA’s Jet Propulsion Laboratory (JPL) in California—in charge of the InSight mission—to analyse and interpret the data from SEIS’s sundial.

The first step consisted in opening the reference pattern photos in a specialized software program to correct the parallax error and precisely determine the direction of the shadow cast by the gnomon. At this point, Denis Savoie needed several crucial items of information in order to determine the north: the exact latitude and longitude of SEIS on Mars, and the precise time and date the pictures were taken (recorded by a very precise clock on board the InSight lander).

These input data were entered into a sophisticated program that computed then provided as output a vital parameter known as the azimuth, which is the angle between the direction of the shadow cast by the gnomon and geographic north. Referring back to the sundial’s reference pattern, which already showed the direction of the shadow, this information was used to locate the north to within one or two degrees. An independent check was carried out at the same time in Paris by Marc Goutaudier and Andy Richard (Universcience/Palais de la Découverte) using a ray-tracing program that accurately reproduces an image of the SEIS reference pattern and the gnomon’s shadow after factoring in numerous parameters. This image could thus be directly compared to the image taken by InSight’s instrument deployment camera.

Under the Martian Sun, the ancestral discoveries of humankind made in an attempt to better define our universe have now been combined with technologies of which none of the great scholars of ancient times would ever have dreamed. We have sent emissaries hundreds of millions of kilometres from our world, robots born of the creativity and quest to explore that is anchored deep in human nature. Up there, they will be directly investigating the stars on our behalf so as to find our path and understand our origins.