A Martian seismometer under the Black Forest

From 12 to 16 March 2018, an international team of engineers and geophysicists carried out performance tests on the qualification model of the SEIS seismometer planned to be deployed in November 2018 by the InSight lander on Mars. 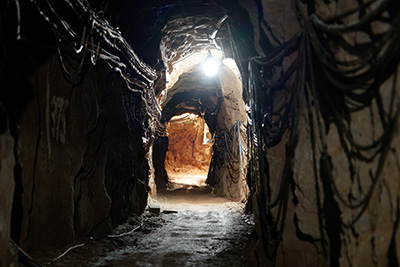 Inside the Black Forest Observatory, some 375 metres from the entrance to the galleries, near the seismic cave used to test the InSight mission’s SEIS seismometer (© IPGP/BFO/Philippe Labrot).Seismometers are by definition instruments that enjoy quiet surroundings. To test such ultra-sensitive apparatus, geophysicists are obliged to set them up in impractical, desolate places such as natural caves or mineshafts. Hundreds of metres underground, conditions are radically different from those on the surface. Most sources of interfering noise are greatly attenuated, and the level of disturbance in seismic stations is reduced by several orders of magnitude.

The Black Forest Observatory (BFO), jointly managed by the Karlsruhe Institute of Technology and the University of Stuttgart, is one of the best seismic stations in the world. It was rapidly identified as being one of the best environments for assessing the SEIS seismometer flown aboard the InSight probe. During the week in March 2018 when the SEIS instrument was being tested there, the BFO actually climbed to the top of the leader board as the quietest seismic site in the world.

The BFO benefits from an extended network of galleries dug out of a mountain massif made of granite. The tunnels of this former mine (Anton) of silver and cobalt, now abandoned, reach down as far as 700 metres in the rock and have been fully refitted. The seismic cave in which the SEIS seismometer qualification model was tested is located in one of the peripheral sections, about 400 metres from the main entrance (see plan below). Beyond this zone are the two airlocks that protect the inner sections that host numerous geophysical sensors that are constantly listening to Earth’s activity.

Plan of the galleries in the Black Forest Observatory for seismic activity. By offering optimal deployment conditions and very efficient protection against sources of noise–whether natural or artificial—this observatory is the ideal site for testing ultra-sensitive seismometers (© BFO / Rudolf Widmer-Schnidrig).

A world of silence

At the BFO, geophysicists from all over the world can test seismometers in exceptional conditions. In the various rooms scattered around the galleries, dug to a depth of 170 metres, the environment remains exceptionally stable, whatever the conditions are like outside. The instruments are protected not only from the vagaries of the weather such as gusts of wind, pressure variations or temperature fluctuations, but also from the constant noise arising from human activity. The annual temperature variations in the depths of the BFO, for example, do not exceed 0.05°C. One of the strengths of the observatory is to allow self-noise to be measured, i.e. the very weak interfering signals emitted by the seismometers themselves during operation. Another major advantage is its ease of access. During the tests, staff can intervene on the instruments at any time, which is not the case in other seismic observatories of a comparable rank.

The international team of engineers and scientists at the Black Forest Observatory during the March 2018 tests on the qualification model of the InSight mission’s SEIS seismometer designed to operate on Mars (© IPGP/Philippe Labrot).In 2017, an initial series of tests had been run on the SEIS seismometer’s short-period (SP) sensors, sensitive to high-frequency seismic waves. A second campaign was then set up to take measurements with the very broadband (VBB) sensors that constitute the real heart of the SEIS seismometer. Conducted by the French space agency, CNES, this required sending a team of about ten specialists.

One of the major difficulties for the engineers was to implement a space-rated instrument in an uncontrolled environment. Indeed, great care is always taken with equipment designed for space use, which is handled in clean rooms that—as their name suggests—are not only extremely clean but where temperature and moisture values are known and controlled. While the level of environmental conditions encountered in terrestrial seismic observatories definitively excluded any tests on the flight model, it was nevertheless considered possible to carry them out on a qualification model.

Key engineering work was consequently carried out by CNES on the instrument. Unlike the flight model, which has three VBB pendulums, the SEIS qualification model tested at the BFO only contained one, placed in a custom-made metal cavity. Simulating the Martian instrument’s evacuated container, the cavity was fitted with a set of valves enabling the pendulum to be placed in a vacuum whenever required (which is not possible on the flight model).

Inside the tunnels of the Black Forest Observatory, the humidity level is very high (95%), and the CNES assembly, integration and test (AIT) engineers also had to design and deploy a custom-made tent fitted with watertight feed-through holes for the electrical cables, in order to regulate humidity. A passive system was used (silica gel to absorb the water vapour), as the risk of disrupting measurements was too high with an active system such as a dehumidifier.

The SEIS seismometer qualification model was placed on a concrete seismic slab and connected to an electronics unit containing several acquisition boards. Known as the eBox, on Mars this unit will remain inside the lander. The waterproof tent was then placed over the whole assembly. A set of STS-2 and trillium terrestrial benchmark seismometers were then placed outside the tent under various thermal protection devices. Once this test assembly was in place, everybody left the mine as all the measurements are taken remotely from the BFO’s main building. 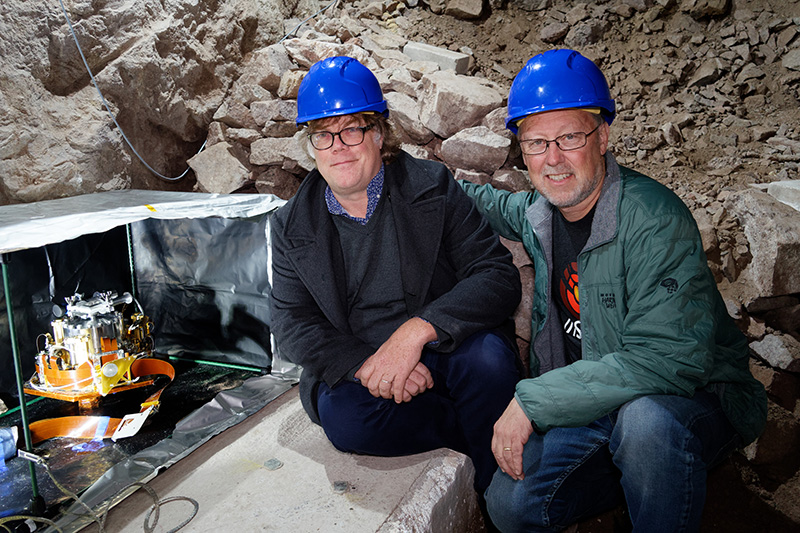 The seismometer collected data for two nights before analysis directly on-site by IPGP and BFO seismologists in addition to remote analysis by experts from the ISAE aerospace engineering school in France and Imperial College London, UK.

The main goal was to determine the self-noise generated by the seismometer’s VBB and SP sensors using two different processing technologies. The quantity of noise generated by the SEIS instrument itself during operation is one of the key parameters to be taken into account in order to fulfil the mission’s scientific goals. It is very difficult, however, to determine the noise inherent to an instrument as sensitive as the SEIS seismometer in a clean room, which is far too noisy.

The results collected during the test campaign showed that the SEIS seismometer is not only well-suited to the Red Planet on which it will operate, but that it offers excellent performance. This is a great achievement for a spaceborne instrument that—unlike its terrestrial counterparts—was also designed to be as lightweight and compact as possible, to consume very little current, to operate at very low temperatures, and to resist the very intense vibrations that are inherent to the launch and landing phases.