Successful launch of the InSight probe on 5 May 2018

InSight blasts its way through the fog

All space missions have a long and complex history—sometimes spanning decades—marked by the numerous technical, scientific, financial or organizational obstacles they have to overcome. Yet everything converges towards one critical step without which nothing can happen, and which teams work towards with a mixture of great pride and nagging anxiety: the launch. 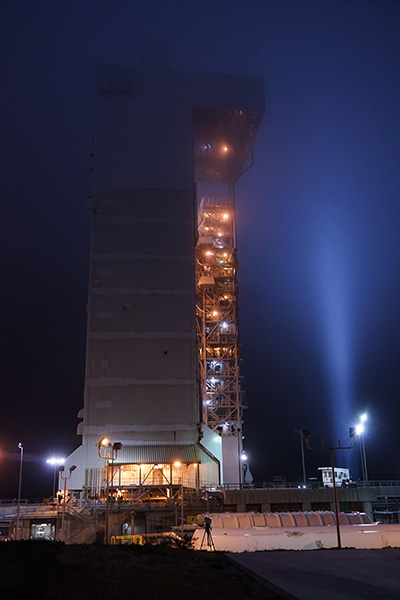 The mobile service tower shines brightly in the Californian night just a few hours before the final countdown. The Atlas V launcher is not yet visible from this viewing angle (© IPGP/Philippe Labrot).

The reliable precision engineering of United Launch Alliance (ULA), the consortium formed by Lockheed Martin and Boeing, worked perfectly once again for the InSight mission. On 5 May 2018 at 04:05, an Atlas V launcher lifted off from Vandenberg AFB Space Launch Complex 3, carrying the InSight geophysics observatory and the two MarCo nanosatellites on the first leg of their journey to the Red Planet.

As the countdown neared zero, thousands of people all along the rocket’s West Coast trajectory held their breath. Many must have been disappointed. The fog covering Vandenberg was so thick when the first-stage engine was fired that the Atlas V launcher’s ascension was completely hidden from view. Only an increasingly powerful roar resounding downwards in waves attested that the launcher was in fact climbing steadily upwards.

Despite the fact that practically nothing could be seen, everything went according to plan. The successful launch of InSight was not only a huge reward and relief for all the teams involved in the mission, but a tremendous testament to the ingenuity and dedication of the men and women working for Lockheed Martin, Boeing, the US Air Force and NASA, who are responsible for the launch.

While the launch itself lasts less than two hours, it takes United Launch Alliance about one year to manufacture the various launcher parts, i.e. the central booster forming the first stage, the Centaur upper stage, the fairing and the many ring-shaped adapters that act as an interface between the different components. Most are made in plants on US soil, although the RD-180 engine that powers the first stage is actually Russian. Launch operations take two months. They consist in building the rocket on the launch pad like a giant Meccano® structure, and organizing everything to ensure a successful launch, from the availability of tracking facilities to the analysis of weather conditions.

A few hours before the launch, a visually impressive operation takes place. The mobile service tower used to work on the launcher is withdrawn. In the case of InSight, this operation was particularly spectacular due to the combination of fog and darkness. Looking like the kind of structure you’d find in an oil refinery, the tower was lit up like a Christmas tree with white and orange lights shining brightly in the Californian night. The rectangular edifice slowly rolled back along its rails, revealing the imposing Atlas V 401 launcher, whose pointed fairing proudly displayed the mission’s colours. Without its strap-on boosters, the rocket looked like a huge pencil pointing skywards, impatient to climb up into the night sky. Standing 57 metres tall, the launcher’s white cylindrical structure was lit up by the powerful beams of projectors that the US Air Force personnel changed from time to time to facilitate photography.

The beautiful yet intimidating complexity of the launcher and its support equipment awakens in onlookers the awareness that humans have an innate desire to explore. This positive, luminous aspect that probably resides in the innermost part of the human soul suddenly becomes crystal clear before such a scene. How else is it possible to explain why people devote so much time, effort, money and determination to deploy such sophisticated vehicles that, just a few minutes after their departure, are swallowed up in the bottomless abyss of space with no chance of returning, their destiny being to try to unveil the countless mysteries of the Universe in which we live? 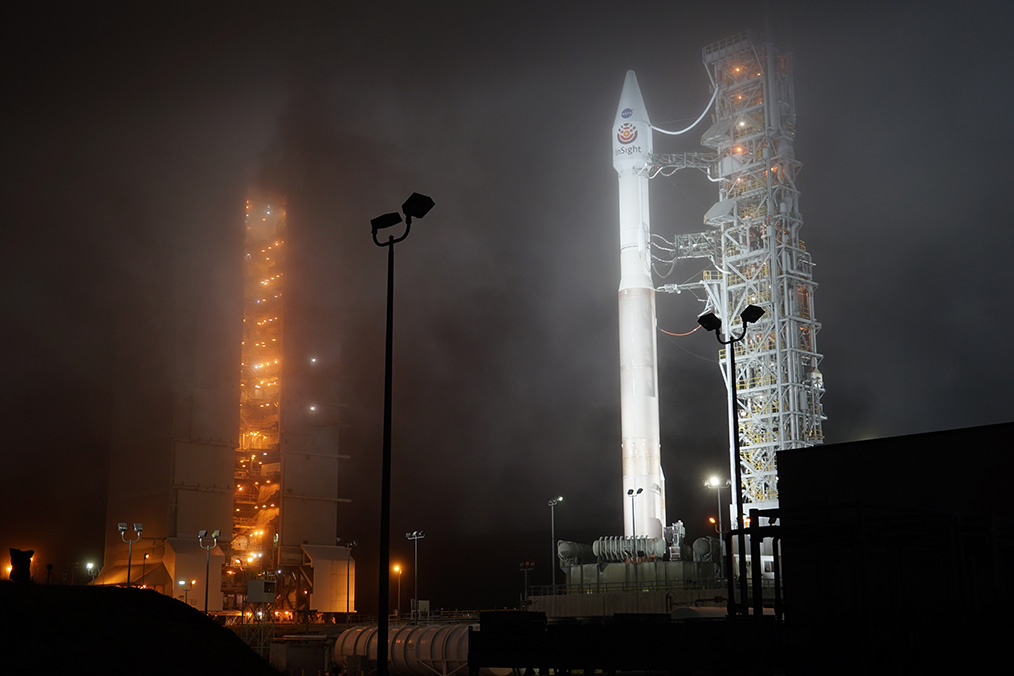 The Atlas V launcher in all its splendour after the service tower’s rollback (© IPGP/Philippe Labrot).

By the time the InSight probe lifted off, the fog had further tightened its grip around the launch pad, and even the cameras deployed all around the launcher could not get a clear, sharp view of its departure. It was in a very strange, rather disconcerting and ominous atmosphere that the rocket began its upward flight. Only the avalanche of telemetry data being downlinked to the controllers' consoles attested that the Atlas V rocket was doing exactly what it was designed to do. 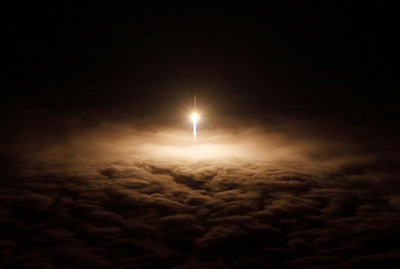 The InSight probe and two MarCo satellites head for Mars on board Atlas V, seen here emerging from the cloud cover (© NASA/Sam Sun).Launched southwards, the main booster making up the first stage worked as planned for 4 minutes before handing over to the upper stage, Centaur. Shortly after its RL-10C engine was ignited, the fairing that had up till then protected InSight was ejected, exposing the probe to the space environment for the first time. After practically one full circle around the Earth on a180-km-high polar orbit, the upper stage engine was reignited to veer left, permanently ripping InSight out of the grasp of Earth’s gravitational force to send it on its way to Mars. Launch operations came to an end when InSight separated from the launch vehicle. Centaur then jettisoned the two MarCo nanosatellites before becoming lost in space.

Accompanied by its two ‘guardian angels’, the InSight probe has begun a six-and-a-half-month journey through deep space. On 26 November 2018, it will attempt a perilous 6.5-minute descent onto the Martian surface to fulfil its mission: to probe the depths of the Red Planet. Despite our ever-increasing knowledge, the internal structure of Mars has managed to keep most of its secrets. The InSight mission, however, is designed to clear up these mysteries as easily as it cleared a way through the thick fog on the day of its launch.