First power-up for the SEIS seismometer in deep space

InSight’s main instrument, the SEIS seismometer, was tested for the first time in deep space

On 16 July at 17:43 in France, the InSight probe’s SEIS seismometer was powered up for the first time in space for around ten minutes. All the data received by the ground segment were as expected, proving that InSight’s passenger was in perfect health. 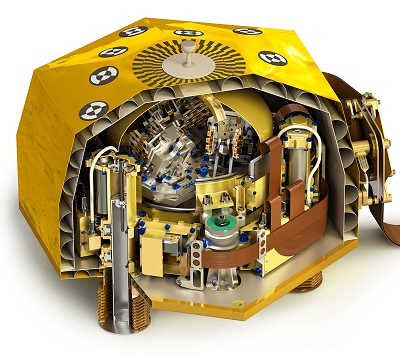 The InSight probe’s SEIS seismometer. On 16 July 2018, the instrument’s first check-up in space ended in a clean bill of health (© IPGP/David Ducros).

Since the last-minute checks carried out on the Vandenberg Air Force Base launch pad on 25 and 26 April 2018, ten days before launch, the SEIS seismometer had not been switched on again. Almost three months later, the French and American engineers working on the InSight mission carried out a functional test in interplanetary space.

The short ten-minute test consisted in powering up the instrument then collecting the data transmitted by its seismic sensors and numerous temperature sensors. All the data generated were then downlinked to Earth via the 34-metre DSS-36 Deep Space Network antenna in Canberra, Australia. The information first transited via NASA’s ground facilities before arriving at SISMOC (SEIS on Mars Operations Centre) at CNES’s Toulouse Space Centre. Once all the data had been downlinked to Earth, the instrument was powered down.

The data were analysed by engineers either in Europe or the USA (CNES and the IPGP in France, Imperial College London in the UK, the Ecole Polytechnique de Zurich in Switzerland, and JPL in California, USA). No problems were detected. Two of the three short-period (SP) sensors provided by the UK (horizontal sensors able to operate in zero gravity) transmitted a signal that could be used from a scientific point of view, whereas the third sensor (a vertical-axis sensor designed to operate in Martian gravity) logically returned a saturated signal. The data received from the very broadband (VBB) sensors provided by France were also reassuring, and the electrical power consumption was as expected by the project engineers. Designed to operate in Martian gravity and aligned vertically, like the third SP sensor, the VBB pendulums also transmitted a saturated signal, as expected.

The weather station, more formally known as the auxiliary payload sensor system (APSS), was also successfully tested without showing the slightest problem in either the sensors or electronics.

Status of NASA’s Deep Space Network (DSN) when the InSight probe’s SEIS seismometer was powered up in space for the first time on 16 July 2018. During the tests, the lander (code name NSYT) was in direct radio contact with one of the 34-metre antennas at the Deep Space Communication Complex in Canberra, Australia (© NASA/JPL).

SEIS instrument to be tested again on 19 July 2018

A second functional test will be carried out on the SEIS seismometer on 19 July, this time to check that the levelling cradle (not powered up during the previous test on 16 July) is operating correctly, and to acquire more data from the two horizontal SP sensors (which, as mentioned above, are perfectly happy operating in zero gravity). 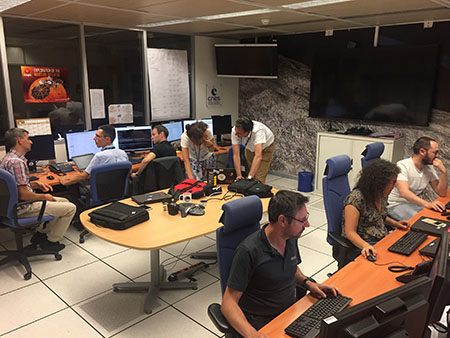 SISMOC at CNES’s Toulouse Space Centre during analysis of the data from the first power-up of the SEIS instrument in space on 16 July 2018. The first data were received in France at 19:45, about two hours after execution of the first command sequences on board the InSight probe (© CNES/Charles Yana).

The levelling system test will focus on validating investigations carried out on Earth with inclinometers (intended to be used on Mars to accurately measure the seismometer’s inclination with respect to the ground on which it will be set down). Measurements taken aboard CNES’s Airbus A310 Zero-G had shown that in the absence of gravity, the inclinometers indicated the value zero, which could therefore be used as a benchmark for sensor calibration.

The test on 19 July will give engineers the opportunity not only of confirming in real terms the assumptions made using the Airbus A310 Zero-G, but also of obtaining data able to be used to quantify over time any (undesirable) drift in the levelling system inclinometers during the mission.

The InSight probe is currently some 19 million kilometres from Earth. Its target, Mars, being in opposition, on 30 July 2018 the distance between the Red and the Blue Planets will only be 57.6 million kilometres, almost the same as the minimum distance ever recorded during the historic opposition of 2003. Just 131 days separate this moment from the probe’s landing on Elysium Planitia on 26 November 2018.