On the evening of 19 December 2018, NASA’s InSight lander marked the history of space exploration by becoming the first interplanetary exploration spacecraft ever to have placed a scientific instrument on the surface of another planet using its robotic instrument deployment arm (IDA). 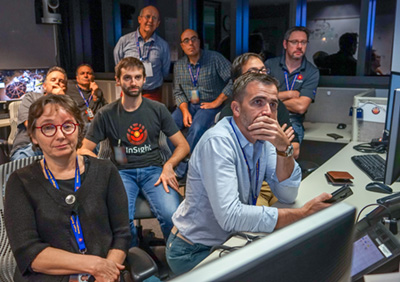 Part of the French SEIS team at the Jet Propulsion Laboratory on 19 December 2018, seven minutes before receiving the imagery that confirmed the instrument’s deployment on the Martian soil. In the foreground, from left to right: Frédérique Meunier (CNES telemetry analyst) and Gabriel Pont (CNES instrument PI) (© NASA/JPL-Caltech/IPGP/Philippe Labrot).

The team members at NASA’s Jet Propulsion Laboratory (JPL) in California had been waiting anxiously all day, because the deployment of the SEIS seismometer on the surface of Mars was crucial to the mission’s success. Like Viking 2’s seismometer 42 years previously, if the instrument had remained on the lander deck, the surrounding noise would have prevented it from picking up really useful signals. The recording of vibrations caused by the wind hitting the solar arrays, which were picked up by the short-period (SP) sensors, is ample proof.

The deployment telecommands had been sent the previous day (Tuesday 18 December) at around 17:00 Californian time. On Mars, it was early on sol 22 for InSight. The IDA supports heavy loads better at very low temperatures, so the project engineers had decided to wait until sunset before setting SEIS down on the ground. At that time of the day, temperatures would have dropped to between -35°C and -50°C or so, but there would still be enough light to take pictures.

After the fully-automated deployment, it was not possible to downlink data immediately, so the mission team had to wait until the evening of Wednesday 19 December (24 hours later) before knowing the result of the complex, risky operation that they had initiated the previous evening.

Arrival of the first data

At 18:00 in California, the team in charge of deployment was supposed to receive a partial telemetry message (without any images) during an X-band telecommunications session. Everyone was waiting to find out whether the IDA had switched to safe mode, which would indicate that something unexpected had happened during the deployment sequence.

Unfortunately for the engineers, shortly before the communication window opened, NASA’s deep space network (DSN) suffered a technical hitch. The huge 70-metre DSS 14 antenna at the Goldstone Deep Space Communications Complex in California broke down, jeopardizing the arrival of X-band telemetry and the imagery to follow three hours later. 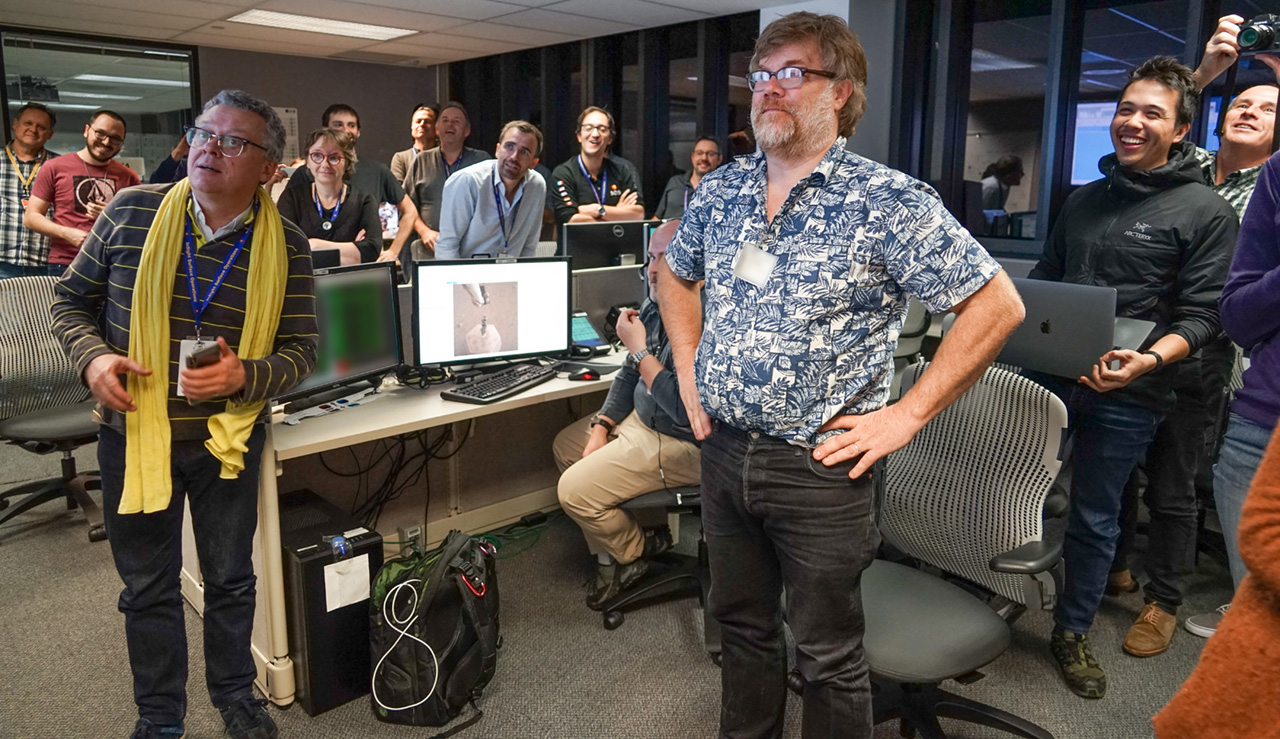 Philippe Laudet (SEIS project manager at CNES, on the left) and Philippe Lognonné (SEIS PI from IPGP, on the right) in the InSight operations room at JPL, riveted to the images of SEIS on the Martian soil (© NASA/JPL-Caltech/IPGP/Philippe Labrot).

After what seemed a long wait and a period of uncertainty, some good news arrived at the JPL InSight operations room: DSN technicians and engineers had managed to get the DSS 14 antenna up and running again in record time. When the X-band telemetry began to appear on the consoles, none of InSight’s “safe mode” flags had been triggered. This meant that either the IDA had accomplished its mission without any difficulty, or that it had not begun deployment due to a prior incident.

One of the really critical events in SEIS’s deployment was the separation of the instrument from its carrying cradle. The seismometer had been riveted to the lander deck for the launch, cruise phase and landing by three conical pillars fitted with Frangibolts.

Frangibolt actuators are often used in the space sector to separate two parts originally attached together. Their shape memory alloy cylinder elongates when an electric current is applied, exerting enough force to fracture a notched bolt. The two parts are released when the bolt breaks in two. Designed by CNES, the cradle holding SEIS included three Frangibolts. If they had failed to work, SEIS would have remained attached to the lander deck. During the deployment sequence, if one or more of these actuators had failed to work as planned, the robotic arm would have been unable to lift the seismometer off the deck or move on to the next deployment operation.

To try to work out whether the Frangibolts had worked correctly, JPL engineers looked at their temperature information, which was part of the telemetry data transmitted by InSight. Although the actuator temperature had always been stable up to then, the engineers noticed that it had dropped. Something had therefore happened to the SEIS Frangibolts. By comparing their temperature with the HP3 heat flow sensor’s Frangibolts (still waiting to be triggered), the project engineers were convinced that all had gone according to plan and that SEIS had not remained attached to the deck. 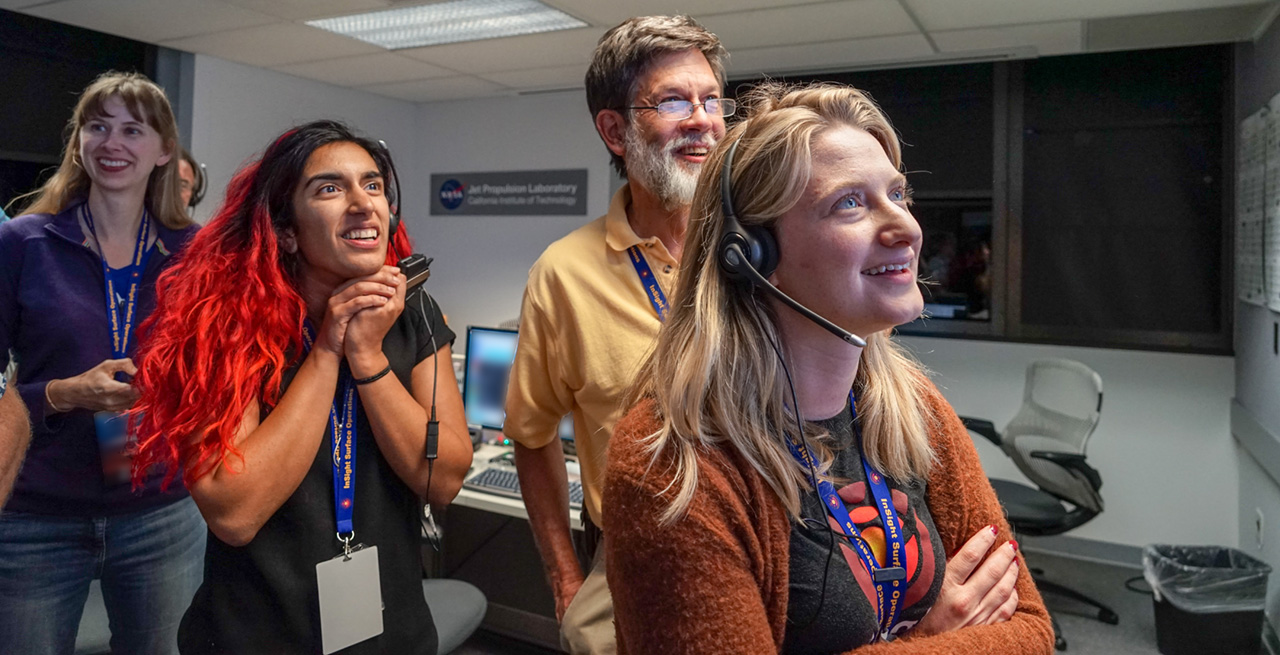 Joy on the faces of JPL engineers upon receiving the first pictures that confirmed the SEIS seismometer’s deployment on the Martian soil (19 December at 20:50 in California). In the foreground, from right to left: Jamie Singer, Ken Hurst and Farah Alibay (© NASA/JPL-Caltech/IPGP/Philippe Labrot).

By studying the telemetry data more closely, they then discovered that the IDA movement counter had counted the exact number of movements planned for the deployment sequence. Having extracted all the information they could from the telemetry data, they then had to wait as calmly as possible (despite their excitement and impatience) for the arrival of the imagery from InSight’s two technical cameras.

Arrival of the first pictures

Around 20:30, when the information relayed by the Mars Odyssey probe was supposed to be downlinked, all the engineers were glued to the consoles in the operations room. The small team of French experts from CNES was also standing by alongside the instrument’s PI, Philippe Lognonné (IPGP), just a few metres from the JPL operators in order to intervene immediately in the event of a problem.

As minute after minute ticked by, the tension became increasingly palpable. Faces that had up to then been relaxed became taut as anxiety appeared to spread through the operations room. As to the Americans, it was impossible to guess what the experienced JPL engineers were feeling, they who had already taken part in numerous Mars missions and who were supervising the team at their consoles. While one was obviously smiling, two others remained very quiet and did not let any emotions show.

A joyful shout resounded at 20:50, when systems engineer Farah Alibay (JPL) first saw the SEIS seismometer safely on the ground. An instant later, the photos taken by the robotic arm’s IDC and the ICC attached under the deck were displayed on the huge operations room screens, triggering an outburst of applause. Overwhelmed by the beauty of the photos and the total success of the operation that they depicted, the members of the mission gathered in front of the screens with amazed or fascinated faces, sometimes reduced to silence. 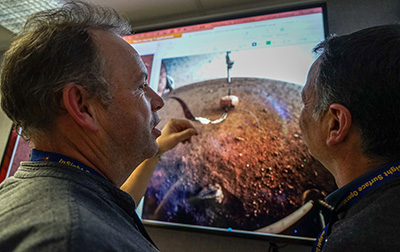 One hour before the arrival of the imagery, the deployment team had displayed on the control room screens some pictures taken with the test bed and ForeSight lander, not just to review one last time the planned deployment sequence but to stave off growing impatience. When the imagery from Mars was finally displayed on the screens, it was amazingly similar to the pictures taken on Earth. Except for the ochre-coloured soil and the twilight sky, it was not easy to spot the differences, especially in the way that the seismometer was positioned on the ground with the cable stretched out behind, which just goes to show how much effort had been put into preparing the SEIS instrument’s deployment on Mars.

The evening of 19 December 2018 is now a historic date in the space exploration calendar: it is the day when NASA’s technological expertise and the efforts of the international team responsible for the SEIS seismometer combined to deploy on the Martian surface an instrument that will enable us to shed light on the Red Planet’s internal structure for the very first time.