A second landing for the SEIS seismometer

NASA has succeeded in setting down on Mars the InSight probe’s seismometer. This is the first time in the history of spaceflight that an instrument has been deployed by a robotic arm (IDA) on the surface of another planet. The success of what is a critical step for the rest of the mission is the result of years of unrelenting technical efforts by US, French and European teams. 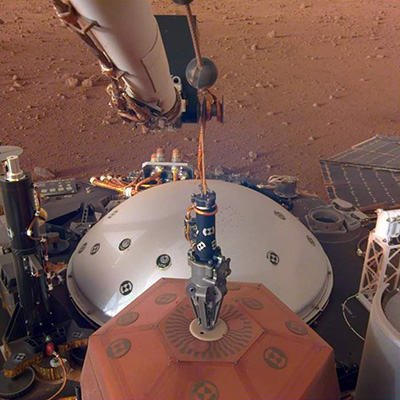 The SEIS seismometer is grabbed by the IDA gripper during sol 20 (© NASA/JPL).

The complex sequence of instructions for deployment had been uplinked to the probe on Mars the previous night (18 December 2018 at 17:11 in California). The InSight probe was then beginning its 22nd day of operations on Mars, it being 5 o’clock in the morning on Elysium Planitia. For reasons of temperature, deployment had been scheduled later that day, in the evening. On 19 December 2018, at 18:40 on Mars, the Sun had just set below the Martian horizon and risen over Los Angeles in California. It was then that the InSight IDA began a series of operations to place the 9.5 kg SEIS seismometer on the ground. The instrument had been powered down for this series of risky manoeuvres. Numerous tests had been carried out previously on Earth to validate the commands, the landing site having been faithfully reproduced for the occasion.

The automated sequence actually began on Mars at 17:00 local time by the simultaneous triggering of the three Frangibolts used to solidly attach the SEIS instrument to the lander deck. To deploy the seismometer, the project engineers had decided to wait a little while to allow the robotic IDA to cool down, it being more effective at low temperatures. The deployment sequence was therefore scheduled for 18:30 on Mars, ten minutes after the Martian sunset.

To place SEIS on the ground, the IDA had to carry out quite a complex series of movements. After raising the instrument vertically 25 cm into the air, the arm had to move backwards to detach the cable from the lander deck, where it had been attached with velcro strips. It then rotated 180° before moving forwards again to continue ripping off the velcro. The IDA then stretched southwards as far as it could to remove the part of the tether attached to the outside of the tether storage box with another velcro patch. This step left SEIS swinging rather scarily from the gripper. For the last part of the sequence, the IDA moved slightly backwards, towards the lander, then followed arcing movements to gently place the instrument on the ground. The sequence did not include opening the gripper. This step, which marked the instrument’s definitive freedom, was scheduled for a few days later. 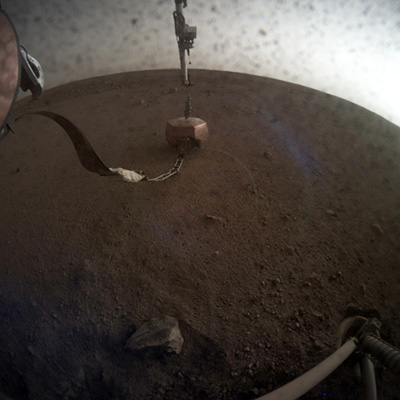 Photo taken by the ICC showing the SEIS seismometer on the ground, just after sunset (© NASA/JPL).The deployment sequence was actually quite short, taking just 10 minutes. The need to take pictures with the ICC (under the deck) and the IDC (on the robotic arm) extended the length of time needed to around 20 minutes within a 45-minute period. It is estimated that the SEIS seismometer’s three legs touched the Martian soil at 18:54 on sol 22 (7.05 am in California).

Because of the night-time schedule chosen for deployment, the first Martian orbiter able to relay data to Earth that could confirm the placing of SEIS on the ground would only be in a position to receive data on the evening of 19 December (early on Martian sol 23). An initial X-band transmission at around 18:00 in California had given the deployment team several subtle indications that all had gone well, but they had to wait for Mars Odyssey to pass overhead three hours later before being able to display the magnificent pictures up on the JPL operations room screens. Between the time that the commands were sent to the Red Planet and the time that the first telemetry data were received, the project engineers had to wait a seemingly interminable 24 hours. This long wait was punctuated by doubt and anxiety, given the complexity of the manoeuvre and the stakes involved.

SEIS was positioned just in front of the robotic arm (so as to ensure that the umbilical tether connecting the instrument to the lander lies flat on the ground), but as far from the lander as possible (1.65 metres) so as to minimize disturbances. The engineers and geologists involved in the project did not take long to choose this site because of the area’s general suitability. InSight landed there on 26 November 2018. Not only is the area reasonably flat (with a slope of only 2 to 3 degrees), but there are very few stones. Almost all the part south of the lander within reach of the robotic arm was therefore suitable for the seismometer’s deployment. 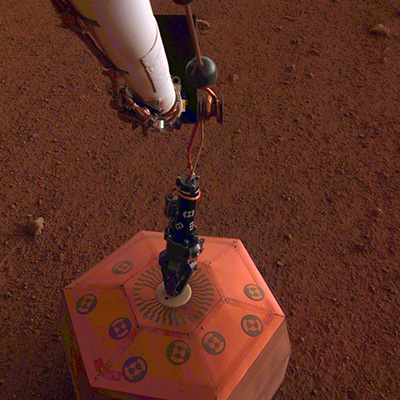 InSight’s SEIS seismometer as seen by the IDA’s instrument deployment camera (IDC) after its deployment on sol 22 (© NASA/JPL).The operations are far from over for SEIS, however. Numerous critical steps need to be performed in the following weeks before scientists can begin tracking down marsquakes. First, the engineers have to align the seismometer along the horizontal plane via its motorized levelling cradle. Next, the VBB pendulums need to be centred and calibrated. Unlike the SP sensors, the pendulums have not yet been activated. All the data transmitted by the six seismic sensors will then be used to characterize the noise level of the deployment site (which must be as low as possible), and the interference caused by the tether connecting the instrument to the lander.

Once the level of performance is considered acceptable, the tether will be fully unwound (it being kept rolled up in the tether storage box). If the project engineers notice that the tether is causing too much noise for the instrument to operate well, the load shunt assembly forming a service loop will be opened. Depending on the results, the tether could then be repositioned using the pinning mass. Only once all these steps are completed can the bulky wind and thermal shield (WTS) be carefully placed over the instrument.

The project engineers and scientists on Earth and Mars still have a long way to go before the first geophysical station on Mars can be considered fully operational, but the deployment of the first seismometer on the Martian surface is already a great success, which team members will no doubt celebrate by taking a few days off for Christmas!