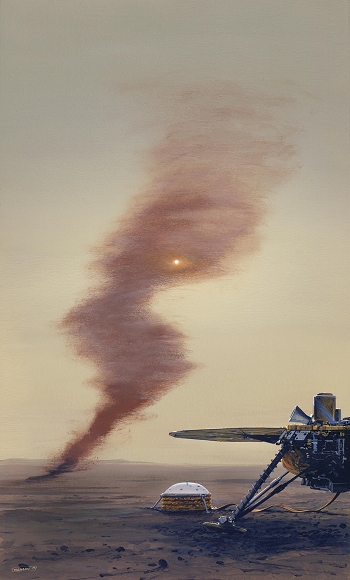 Artist’s impression of a dust storm on Mars (© IPGP/Manchu/Bureau 21).

Unlike on Earth, the sources of noise able to disturb the acquisition of seismic signals are limited on Mars.

The Red Planet has no oceans or seas, a major source of noise on our own planet. Obviously there is no human activity to contend with either. Yet the job of the InSight probe’s SEIS seismometer will be complicated by the Martian atmosphere.

The interaction of the Martian atmosphere and its surface will leave a trace on seismic records. For a first approximation, this phenomenon may be negatively considered as a source of disturbance against which little or nothing can be done. SEIS will of course be sheltered from winds by its protective cover—the WTS—which will be efficient against most wind effects without being able to cancel them out completely. Atmospheric activities have other indirect effects that cannot be offset. They may be classified into two major categories.

The first is due to the global atmospheric circulation. Constantly flowing around the planet, the Martian air excites the planet, making it vibrate like a bell at precise frequencies.

Geophysicists call this the planet’s “hum”—a constant buzz that only seismometers sensitive to long periods (like SEIS) can hear.

Despite the fact that this constant hum may be considered an interfering background noise, it is of particular interest to geophysicists because it can be used to probe the upper layers of Mars from a depth of several dozen metres down to several hundred kilometres (giving information on the mantle), even when there are no quakes.

Some large-scale weather events, like the impressive dust storms that sometimes completely envelop Mars in an opaque, impenetrable veil, are likely to make the planet vibrate significantly. SEIS will be ready to measure the resulting hum. 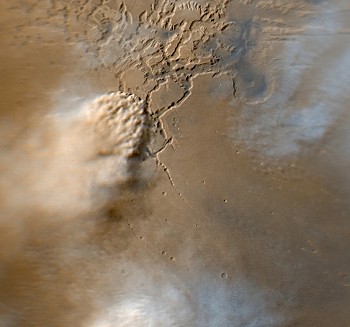 Orbital view of a dust storm near the huge Valles Marineris canyon (© NASA).

The last global dust storm occurred in 2007, and these repetitive events occur roughly every 3 Mars years (the equivalent of around 6 Earth years). In November 2018, InSight will land during a period conducive to dust storms, and it is possible that the probe will witness this spectacular phenomenon.

During a global dust storm, the significant drop in sunshine and the accumulation of dust on the solar arrays could easily jeopardize a lander, but InSight has been designed to withstand such a disastrous scenario.

The second atmospheric source of micro-seismic noise is local: the landing site is affected by gusts of wind or the arrival of a dust devil near the probe.

In both these cases, the Martian air either exerts pressure on the ground or removes it. A dust devil 10 m wide thus reduces the pressure on the soil of an amount equal to that of a small car being removed from the surface.

The surface’s static deformation will affect the seismometer, and more particularly the pendulums that measure horizontal motion. Although the ground also moves up and down, the effect of sideways movement is maximal, and this will be picked up by the SEIS instrument’s sensors. 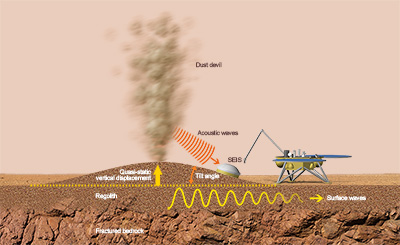 Simulation of ground deformation around the InSight lander (© IPGP/David Ducros).

When exerting a load—to whatever degree—the atmosphere will create very slight slopes in the surface that SEIS will inevitably record. It is as if the atmosphere was using the surface of Mars like a drum, the multiple variations in pressure on the Red Planet’s soil being like fingers constantly but erratically tapping a drum skin.

The passage of a dust devil or turbulence also has another effect. It creates both a sound wave that propagates through the air and a high-frequency surface wave that travels along the Martian ground.

Once again, both these waves will be plotted on the seismograms. The instrument will therefore “see” an atmospheric disturbance of any kind—for example a dust devil, whether or not it actually raises dust and can therefore be seen or not by the lander’s technical cameras—before it actually arrives at the landing site, and monitor it until it moves away and finally disappears. 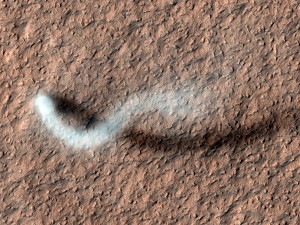 Dust devil photographed by the US Mars Reconnaissance Orbiter over the dull plains of Amazonis Planitia (© NASA/JPL/University of Arizona).

The passage of a dust devil within the vicinity of the InSight probe may then be confirmed by the powerful camera on board Mars Reconnaissance Orbiter, capable of identifying the marks on the ground left by these miniature whirlwinds that zigzag freely over the Martian surface. The ultra-sensitive pressure sensor of the probe’s weather station will also provide precious data.

The good news is that by analysing atmospheric disturbances around the landing site both in the high- and low-frequency range, geophysicists will be able to “virtually” penetrate the subsoil down to a few hundred metres in order to study its properties. They will, for example, be investigating the depth of the regolith—the layer of soil pulverised by the impact of innumerable asteroid and meteorite impacts—and looking for discontinuities between layers of material with different physical properties, then estimating their elasticity (which depends on the composition of the rocks). In other words, they will be turning a disadvantage into an advantage.