The InSight mission is the result of an international collaboration between NASA and several European laboratories (© CNES/IPGP/David Ducros).

The pendulums and evacuated sphere were manufactured and assembled on the premises of SODERN. The instrument was funded by CNES, which also carried out numerous tests within its Toulouse facilities. Other tests were carried out by the Institut de Physique du Globe de Paris, particularly on its Paris site at St-Maur. Numerous CNES laboratories also contributed to various studies. The Institut de Minéralogie et de Physique des Matériaux et de Cosmochimie carried out contamination studies, the Laboratoire de Météorologie Dynamique (LMD) helped model winds, and the CERMES laboratory affiliated with the Ecole Nationale des Ponts et Chaussées carried out analyses concerning the instrument’s legs. 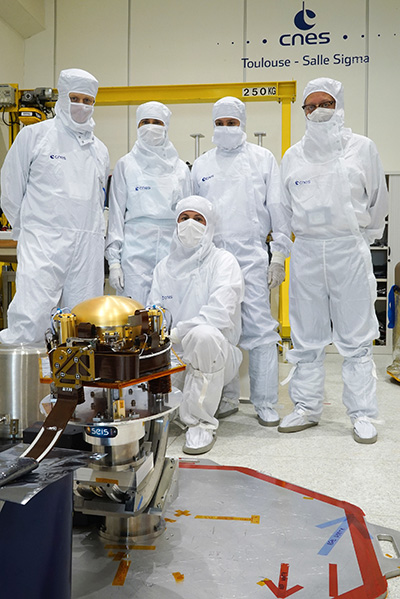 Members of the CNES technical team with the flight model of the SEIS seismometer (© CNES/MARTIN Emmanuelle).

Several European and American laboratories have also helped in the technological development of SEIS. Imperial College London provided the short-period sensors which round out the frequency range to which the VBB pendulums are sensitive, while the Max Planck Institute for Solar System Research (MPS) in Lindau designed the levelling system used to align the seismometer horizontally once on Mars. Federal university ETH Zurich was responsible for developing the electronics unit containing the various acquisition and control boards that manage SEIS.

NASA’s Jet Propulsion Laboratory (JPL) in Pasadena, California, already actively involved in developing the InSight probe alongside US manufacturer Lockheed Martin, also brought its expertise to bear in the case of SEIS by providing both the cable connecting the instrument to the lander and all the seismometer’s thermal protective systems: the Remote Warm Enclosure Box, the dome-shaped Wind and Thermal Shield, and finally the titanium evacuated sphere containing the VBB pendulums, which raised in itself numerous technological challenges.

French university and CNRS laboratories will be analysing the data received from Mars. They include the Laboratory of Planetology and Geodynamics (LPG) in Nantes, the IRAP space astrophysics laboratory in Toulouse, the Paris-based LMD for weather and climatology research, and the GeoAzur mixed research unit in Nice.

The latter will also support the “seismo at school” network to help disseminate seismological and meteorological mission data among primary and secondary schools.