InSight’s landing phase is the most critical of all the mission phases. It starts exactly three hours before contact with the highest layers of the Martian atmosphere, some 125 km from the surface.

Based on Phoenix, a polar lander that successfully landed on Mars’s glacial boreal plains on 26 May 2008, the InSight probe has benefitted from all the lessons learned from this mission. The only major difference concerns the landing site: InSight will land on the equator, whereas Phoenix was sent to Mars’s arctic regions.

Separation from the cruise stage

Seven minutes before hitting the layer of air around Mars, pyrotechnic devices will shear the bolts attaching InSight to its cruise stage, allowing separation from the stage designed to safely guide the probe all the way to Mars.

For one and a half minutes, the capsule containing InSight will slowly rotate until its heat shield is pointing forward, towards its target planet. At this point, it is travelling very quickly, hurtling towards the Martian ground at the hypersonic speed of about 5.5 km/s.

Like a bullet fired from a gun, it enters the atmosphere along a ballistic trajectory with an entry angle of 12.5°. Whether landing on Earth or on Mars, the angle of entry is critical, much more so than speed. If the angle is too shallow, the probe will bounce off the atmosphere and be lost in space. If it is too steep, the friction against the capsule would be too great, turning the spacecraft into a ball of fire.

To survive the intense frictional forces that characterize entry into the atmosphere, InSight is protected by a large heat shield covered in ablative tiles. By slowly burning off, the tiles will absorb the huge amount of energy caused by the atmosphere’s resistance to InSight’s arrival.

At the highest peak of deceleration, the probe will be subject to over 9G, a load that no human could withstand. The mobile masses of the VBB pendulums will at that point press against their end stops with a load equivalent to 2 kg on Earth, and they must resist the slightest deformation.

The entry vehicle, made up of a heat shield and a rear shield, contains the stowed lander. During this naturally turbulent stage, it is stabilized by small retrorockets. The capsule was nonetheless made to be globally stable from an aerodynamic point of view.

There is no guidance as such during the entry phase, which explains why the size of the landing ellipse delimiting the area in which InSight is likely to land is much bigger (130 km x 27 km) than that of the Curiosity rover.

When InSight lands on Mars on 26 November 2018, it will be autumn in the northern hemisphere, and the season of dust devils will have begun. The wind will be blowing large quantities of very fine dust particles into the air, possibly changing atmospheric properties significantly. The Martian weather will be therefore be monitored very closely during the weeks prior to the landing. Numerous simulations have shown, however, that the probe should be able to cope with a wide range of situations, even difficult ones.

After atmospheric entry, the second step for the InSight lander is a parachute-braked descent. Twelve metres across, the parachute will unfurl at around 9 km above the surface. Located 2.7 km below the mean level of Mars (a kind of virtual sea level), the landing site enables efficient braking due to a sufficiently big air column.

Despite having been slowed down during the entry phase, the probe will still be travelling at a supersonic speed (around 1.5 Mach, which is a little over the speed of sound and corresponds to approximately 350 m/s) when the parachute opens, complicating its task. There will be a huge stress on the parachute fabric and suspension lines, but the parachute has been specifically designed to be able to open fully at high speed without tearing. Due to the low atmospheric pressure on Mars and a need for speed, a drogue parachute would be of no use in fully deploying the main parachute. This step requires the energy provided by a mortar.

Fifteen seconds after deployment of the parachute, at an altitude of around 7.2 km and travelling at 443 km/h (or 123 m/s, which is the equivalent of around Mach 0.5 on Mars), the heat shield—having fulfilled its role—is ejected and drops down onto the Martian ground. It is not ejected right after the parachute’s opening because the chute is at first subject to strong oscillations. The heat shield is jettisoned only once these have settled down.

Ten seconds after the heat shield has been ejected, the lander’s three telescopic legs are free to deploy with no fear of contact. They unfold in quick succession, with 0.5 s between them.

Five seconds later, at around 6 km above the surface, the descent radar starts operating and seeks the Martian surface. It is designed to supply the InSight probe with precise information on its altitude and speed relative to the ground. The radar will lock on to the ground at an altitude of around 2,400 m. The radar data will be used until the probe is within 30 m, when parasitic reflections from the surface will interfere with navigation data, making them unusable. 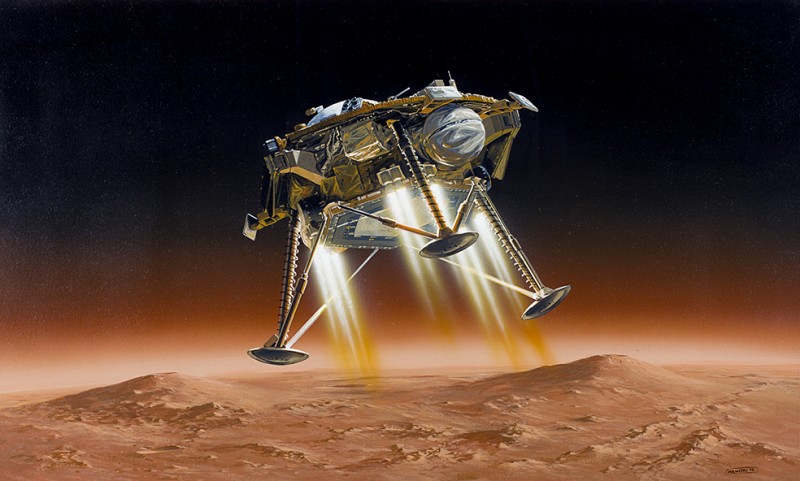 Artist’s view of the InSight probe during its final (powered) landing stage on Elysium Planitia. To brake its descent, the spacecraft is fitted with three groups of pulsed retrorockets, each developing a thrust of around 300 newtons. Although by definition it is very sensitive to the least vibration, the SEIS seismometer has been designed to withstand the very violent bangs and bumps associated with a Mars landing (© IPGP/Manchu/Bureau 21).

With 1.3 km to go before landing, while still travelling at 224 km/h, InSight separates from its parachute, which remains attached to the rear shield of the capsule. Now in free fall, it drops like a stone towards the Red Planet, leaving behind the rear shield.

Very quickly, half a second later, the lander fires its retrorockets—three clusters of four hydrazine-powered thrusters each supplying a thrust of 300 N—to brake and stabilize the spacecraft. The onboard computer which controls the thrusters will seek to reduce horizontal speed and keep vertical speed constant. Depending on the situation, the probe may need to perform a manoeuvre to avoid the rear shield so that the parachute fabric cannot, by a dreadful stroke of bad luck, cover up the lander once on the ground.

When just 50 m from the ground, when the lander’s vertical speed has been reduced to 30 km/h, the contact sensors on the legs are activated. The Martian surface is then very close. InSight’s mean vertical speed will be only 8 km/h or so (a little more than 2 m/s) when it finally comes into contact with the surface, and its horizontal speed nearly three times less. The touchdown is recorded by the contact sensors. By then, InSight will have travelled hundreds of millions of kilometres through space to arrive at the Elysium Planitia region around 2 o’clock in the afternoon of this beautiful but cold winter day on Mars.

Mars in a Minute video series : How Do You Land on Mars ? (© JPL-Caltech).

The retrorockets are cut off less than 0.25 s after contact with the Martian surface to minimize deterioration of the landing site by the powerful gas jets from the thrusters. Any damage will be limited to the area underneath the landing platform, which may be hollowed out a little by the jets (a phenomenon known as site alteration).

For safety reasons, the solar arrays will only be unfurled 16 minutes after InSight’s arrival so as to minimize the influence of dust settling after the probe’s noisy arrival on Mars. This delay also limits the amount of dust that will settle on the lander deck.

This marks the end of the InSight lander’s journey and the beginning of a whole series of checking operations. The same cannot be said for the SEIS seismometer, which is still one metre above the Martian surface. The mission’s objective is to carefully place it on the dusty, rust-coloured ground. It is only once its three conical legs are firmly planted in the dust, after a long instrument deployment phase, that the landing per se will really be over.