The SEIS Instrument : Ultrasensitive and ultra-robust 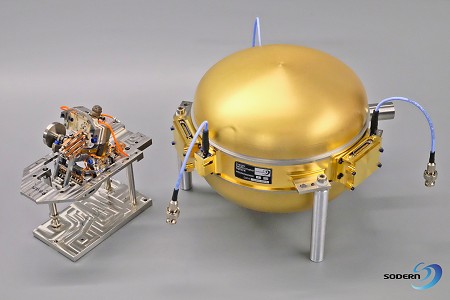 A VBB pendulum beside the evacuated sphere that houses it (© IPGP/SODERN/CNES).

The Very Broad Band seismometer aboard the InSight space probe is an extremely sophisticated instrument with two decades of engineering behind it. It has benefited in particular from the legacy of Mars 96 and NetLander, missions that were unfortunately never completed.

At the heart of the instrument lie three exquisitely sensitive pendulums that will be able to detect the tiniest movements of the Martian surface. The displacement of the moving part of the pendulum will be very precisely measured electronically. A feedback mechanism will be continuously applied to the moving part with respect to its equilibrium position so as to further increase the measurement precision.

At this point we already have a perfectly functional pendulum. However, several tweaks were necessary to make the whole assembly suitable for operation under Martian conditions.

To fine-tune the pendulums for Martian gravity, mission engineers designed a motor-driven equilibrating system. In addition, each pendulum is fitted with a special thermal compensation mechanism to guard against the rapid and very wide temperature variations on Mars.

The most hostile factor on Mars for seismometers is doubtless the huge temperature variations that occur between day and night and over the course of the seasons. The SEIS seismometer therefore has several thermal barriers. 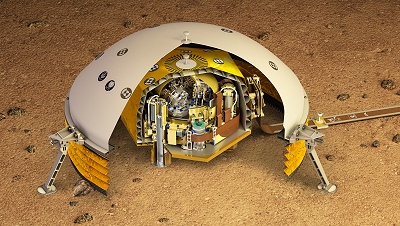 This cut-through view of the SEIS seismometer shows the dome-shaped wind and thermal shield (WTS), the remote warm box (RWEB), the levelling platform, and the inside of the evacuated sphere protecting the VBB pendulums (©IPGP/David Ducros).

Like a Russian doll, the three pendulums nestle under extreme vacuum conditions within a titanium sphere which is itself enclosed by a protective honeycomb-structured cover that uses the Martian atmosphere as an additional thermal insulator. Finally, the whole assembly is placed under the WTS, a heavy wind and thermal shield designed to minimize thermal contrasts and offer some protection against gusts of wind.

In contrast to the Viking missions, where the seismometers remained physically attached to the lander, InSight has the ability to place the instrument on the ground using a robotic arm with a gripper. In the first instance, the arm will grasp the seismometer in order to place it on the ground. A semi-rigid umbilical tether connects the instrument to an electronics unit (or “eBOX”) inside the InSight lander; this provides electrical power, digitizes signals and transfers digital data to and from the lander's onboard computer.

The sphere containing the pendulums is mounted on a metal cradle fitted with three motor-driven legs to provide a very accurate level with respect to the horizontal. The quality of the set-up on the ground is absolutely essential to guarantee the seismometer’s optimal operation. 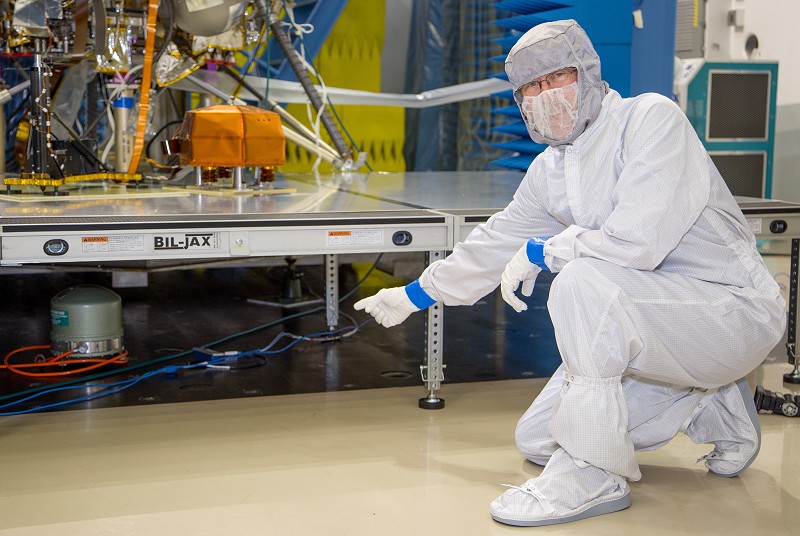 Only when the instrument is perfectly positioned can it be covered by the wind and thermal shield. All the conditions will then be met to be able to start the measurements, which will last two Earth years.