Studying Mars without contaminating it

Right from the very start of space exploration, scientists have been aware of the risks inherent in sending unsterilized spacecraft to other planets. Signed in 1967 by numerous organizations involved in the conquest of space, the Outer Space Treaty drawn up by the United Nations stipulated that precautions must be taken to avoid contamination of bodies in the solar system by terrestrial germs. Developing in a favourable medium, these could potentially eliminate possible extraterrestrial microorganisms or destroy chemical markers of inestimable scientific value in understanding the origins of life. 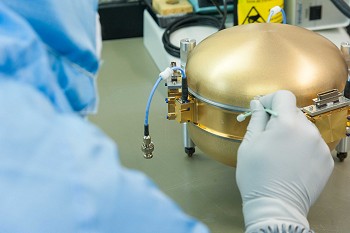 Under the United Nations umbrella of planetary protection, space agencies must comply with a set of rules and regulations drawn up by the Committee on Space Research (COSPAR).

The precautions that have to be taken depend on the target celestial body and the type of mission. In the case of a simple fly-by of the Moon, planetary protection constraints are minimal: the risk of crashing into the surface is limited by the type of mission (fly-by), and what is more, the lunar surface is deemed to be extremely hostile to all forms of life. However, there is a major risk of contaminating Mars, especially when a craft lands on its surface.

According to the COSPAR rules of planetary protection, the InSight mission belongs to category IVa, reserved for missions whose aim is not to detect signs of life but which are intended to land on planetary surfaces with significant potential for researching traces of life and studying the origins of life. The constraints imposed to prevent contamination at all costs are drastic, and have a significant impact on the mission budget. 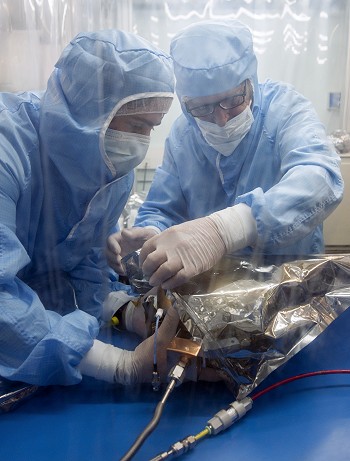 Bagging the sphere flight model before carrying out a leak test (© Thierry Cantalupo/IPGP).

Since the SEIS seismometer has to come into contact with Martian soil, the instrument must be as clean as possible.

During construction, the various components of the instrument will have been regularly disinfected, e.g. by cleaning the surface with antiseptic products such as isopropyl alcohol.

Any activity around the instruments is obligatorily in a cleanroom meeting the ISO 7 standard or higher.

In these ultra-clean working environments, there must be fewer than 10,000 particles per cubic metre of air. The rooms are under positive pressure to prevent pollutants from being carried in from the outside, and technicians must wear one-piece antistatic suits with integral masks. It is mandatory to disinfect all tools brought in from outside.

Once assembled, the seismometer must again be sterilized, either by baking (at 110°C for 50 hours) or by exposure to a gaseous plasma of hydrogen peroxide. Furthermore, throughout the construction process, samples are periodically taken off different components to check the degree of surface contamination.

The SEIS seismometer must harbour no more than 20,000 microbes in all. To avoid any recontamination after cleaning or sterilization, e.g. during transport or handling, team members use special Tyvek ® bags that allow connectors to pass through.

The SEIS seismometer is not the only system that has to submit to the rules of planetary protection. These apply to the entire mission, including the space probe and launcher.

The InSight probe is not the only spacecraft heading to Mars. The Centaur upper stage of the Atlas-V rocket (which provides the thrust necessary to free the probe from Earth's gravity) is also leaving for Mars. Given that it is not feasible to sterilize something as big as a launcher stage, some means must be found to ensure that the course followed by the Centaur stage does not coincide with that of Mars as it orbits the Sun.

The rules of planetary protection stipulate that the probability of Centaur crashing into Mars must be less than 10-4 over a period of 50 years. Hence, during launch and—contrary to what one might think—InSight and its launcher are not pointed directly at the Red Planet. In fact, everything is done to make the rocket miss its target! It is only by using manoeuvres to correct the trajectory during the flight cruise phase that the spacecraft is progressively brought back on course.

Furthermore, and by way of an additional precaution, immediately after the InSight probe separates close to Earth, the Centaur stage carries out a contamination and collision avoidance manoeuvre (CCAM) to further reduce the risk of contaminating the Red Planet.

Finally, even the risk of the InSight spacecraft crashing into Mars following some critical failure during the journey from Earth to Mars is taken into account. Interstellar navigators must demonstrate that the probability of a collision with the planet is minimal, and numerous simulations have been carried out to convince the regulators responsible for making sure that the rules of planetary protection are satisfied.

Clearly, the principles of planetary protection have significant consequences for space missions.

Decontamination and sterilization of the space probe 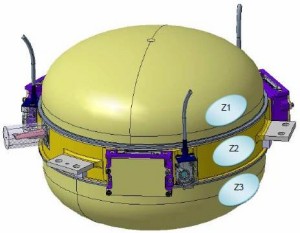 Like the seismometer, the InSight probe has been assembled and tested in a cleanroom. Its components have been regularly cleaned and/or sterilized and many precautions have been taken to avoid recontamination.

The level of contamination has been quantified by samples taken at regular intervals. There must be fewer than 500,000 spores (which is how germs are counted) over the whole of the probe, including the cruise stage. Being destined to land on Mars, the acceptable number for the lander is even lower, with no more than 300,000 spores allowed. The mean number of spores on the surface of the spacecraft must be less than 300/m2. On the inside, the acceptable quantity of spores is slightly greater, given that only a crash would lead to these spores being released into the Martian environment (whether the surface or atmosphere).

All the organic materials used in the construction of InSight have been subject to review. Depending on the mass sent to Mars, each material is either simply documented or inventoried along with a sample which is then kept.

Even though InSight is not conducting any experiments to detect life, scientists have to be extremely careful about sending carbon-containing molecules to Mars. The risk that these may one day compromise the chemical analyses carried out by other missions in the future is by no means negligible, hence the importance of maintaining an up-to-date register of exactly what has been deposited on Mars.

Finally, it is worth mentioning that the InSight landing site is not in what planetary protection rules describe as a “special region” i.e. an area of the planet Mars where forms of terrestrial life might have a strong chance of propagating as a result of ice or a film of liquid water close to the surface.

Located at the equator, the soil on the Elysium Planitia is completely dry; it was for this reason that the penetrator on the HP3 instrument, which has to bore down to a depth of 5 metres, received the approval of the planetary protection committee. If specks of ice had been present on the surface, the situation would have been radically different because of the heat liberated by the drilling process.