The Mars 96 Optimism experiment: a seismometer on Mars 20 years after Viking

On the 16th November 1996, Russia re-engaged with one of its old obsessions—the exploration of Mars—by launching a particularly ambitious probe known as Mars 96. Consisting of an orbiter carrying an impressive list of scientific instruments, the mission also included two small autonomous stations capable of landing gently on the surface in addition to two penetrators which, launched like darts from orbit, would embed themselves in the rocky surface to study the subsoil. The stakes were high for Mars 96, and the size of the space probe was probably only matched by the breadth of international cooperation.

This major project involved scientists from many countries, including France. Among the instruments proposed by the French laboratories was the Optimism seismometer mounted on small ground stations.

Optimism was actually a French acronym for Observatory of PlaneTary scIences: MagnetIsm and Seismology on Mars, though it humorously reminded everyone at the same time of the need to be optimistic when trying to listen out for seismic tremors on a planet as quiet as Mars.

Before Mars 96, the only seismometer ever to have worked on Mars was the one on the Viking 2 lander, which had left scientists imagining that seismic tremors were rare events on the Red Planet. Over a 19-month period of listening, admittedly under difficult conditions, just one quake was possibly detected. A certain dose of optimism seemed necessary for those scientists seeking to detect Martian tremors, given that the small ground stations aboard Mars 96 had to be fully automated, being incapable of receiving commands from Earth. This challenge—which is still pertinent today, as proven by the InSight mission—was taken up by a French team, who developed an instrument much more sensitive than that launched in 1976 on the US Viking mission.

Designed by the Institut du Globe de Physique de Paris (IPGP/CNRS) in collaboration with the Institut National des Sciences de l'Univers (INSU/CNRS) and the SODERN (EADS) company, development of the Optimism seismometer posed many challenges. As with all space seismometers, the instrument had to be small, light (mass being a major source of cost for space activities), power-efficient and very sensitive, while still being able to withstand the bumps and bangs of lift-off and landing. 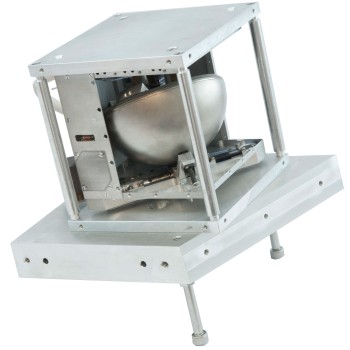 The Optimism seismometer for the Mars 96 mission (© Hervé Piraud/IPGP).

The challenge was taken up by the technical teams. With a mass of just 450 g the instrument fitted into a roughly 9 cm cube and consumed very little electrical power (a mere 67.5 mW).

The Optimism seismometer was sensitive to long-period seismic waves (from 0.5 to 10 seconds), but on the vertical axis only.

The displacements of the mobile mass, attached to a spring, were registered by two sensors, one measuring the position of the pendulum, the other its speed. The sensitivity was already very good since Optimism could react to ground movements in the order of nanometres over periods of 2 seconds. The seismometer was powered by a battery with a lifetime of one month, though it was also connected to the power supply of the station that housed it.

The pendulum was enclosed within a relatively highly evacuated titanium hemisphere roughly 1 litre in volume. This was particularly important since it allowed any temperature variations inside the probe to be effectively reduced.

Optimism was not deployed on the Martian surface like SEIS, but was designed to operate inside the stations once on the ground after having jettisoned their airbags. This setup no doubt lacked the performance advantages of InSight but was nonetheless a great improvement on the Viking landers. This progress was made possible in large part by the use of a rigid carbon fibre structure integrated within the small station and supplied to the Babakin Space Centre by DT-INSU and the IPGP. This structure improved the seismic coupling for the Optimism experiment.

The mobile mass could be recentred by a small motor that could also adjust the equilibrium position of the pendulum as a function of the uncertainties related to the magnitude of gravity at the landing site. Once the stations had landed, the seismometer was automatically levelled by gravity to an accuracy of 1°. To obtain the most reliable measurements possible, Optimism was also supported by temperature sensors and inclinometers.

Other geophysics experiments apart from seismology had been included in the Mars 96 mission programme. This is why the ground stations included a weather station and a magnetometer. The penetrators were also fitted with a short-period seismometer, an accelerometer, a temperature sensor and a magnetometer, all constructed by the University of Braunschweig in Germany, the data being acquired by Optimism's electronics package. 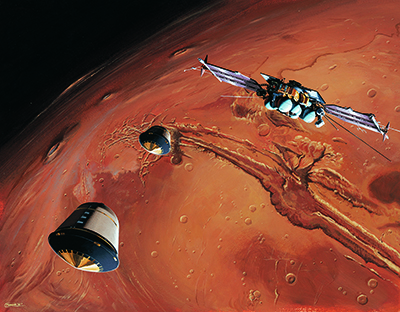 The exploration of Mars is very risky, and the fate of the Optimism seismometer bears witness to this fact. Despite the care, effort and resources that went into its development, what remains of the instrument now lies at the bottom of the Pacific Ocean.

On the 16th November 1996, roughly one hour after lift-off, the fourth stage of the Proton launcher experienced a major malfunction, ultimately condemning the Mars 96 probe to a low Earth orbit. Under the effect of atmospheric friction, the spacecraft’s orbit deteriorated rapidly and it plummeted into the depths of the Pacific Ocean the following day, taking with it the hopes and dreams of an entire army of scientists and engineers. The internal structure of the Red Planet would remain shrouded in mystery for a while longer.

Now it falls to InSight to walk in the footsteps of the Viking probes, 40 years after their touchdown on the surface of the Red Planet and 20 years after the dramatic launch failure of Mars 96. Will Mars this time reveal its most intimate secrets? Just as in the past, optimism is still in the air today among planetary seismologists.

Characteristics of the Optimism seismometer

The logo of the Optimism seismometer (© IPGP).The Optimism instrument was financed by French space agency CNES. The Institut de Physique du Globe de Paris (IPGP) was responsible for scientific aspects, while the technical directorate of the Institut National des Sciences de l'Univers (DT/INSU) was responsible for technical aspects. The SODERN (EADS) company participated in Optimism's design and was selected to construct it. A company called SOREP was chosen for the electronics part. Finally, many other partners worked on the project, including AETA, Martin-Pfeil, VERELEC, the Paris Observatory, the Laboratoire de Physique du Solide in Meudon, and TU-Braunschweig-IGM.