A natural source of seismic waves, meteorite impacts will be a valuable ally for InSight 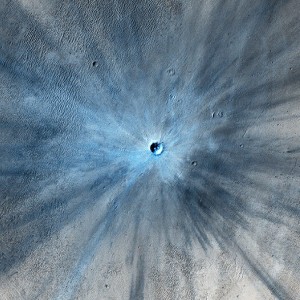 A recent impact on the surface of Mars (© NASA/JPL/University of Arizona).

To probe the depths of Mars and determine its internal structure, the InSight mission relies first and foremost on the planet’s seismic life.

Although seismologists expect a level of seismic activity much lower than that on Earth, they nonetheless hope to see a few quakes during the mission and take advantage of the seismic waves generated by the tremors to pierce the mysteries of Mars’ planetary interior.

However, it is entirely possible that Mars has stopped trembling for good, having exhausted all its internal heat. The Red Planet may actually be geologically dead, a still and frozen rocky globe circling the Sun. This plausible situation has been taken into account by the scientists involved in the InSight mission. Should it prove to be the case, a celestial phenomenon will nonetheless be used to advantage to probe the interior of Mars: asteroid impacts.

Billions of years ago, when Mars and Earth were formed from the cloud of dust and gas that surrounded the young Sun, their surfaces were continually bombarded by showers of asteroids and comets that left spectacular scars in the form of craters.

Fortunately, the skies today have become much calmer, but occasionally in its voyage around the Sun the Earth encounters rocky fragments wandering aimlessly through interplanetary space. If they are sufficiently massive, these rocks pass through the atmosphere leaving a fiery trail, landing on the surface in the form of meteorites. Rare and highly sought after, these celestial pebbles are a source of great joy to scientists and private collectors alike. 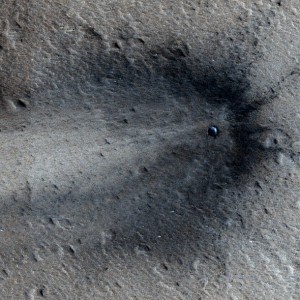 A recent impact on the surface of Mars (© NASA/JPL/University of Arizona).

Meteorites do not fall exclusively onto our own planet. These rocks from the sky also fall on Mars, and vehicles such as Opportunity or Curiosity encounter them from time to time during their exploration of the Red Planet. The rovers then stop to take photographs and carry out a few chemical analyses before quickly continuing on their way. Their mission priority is first and foremost to study Martian rocks, and meteorites are regarded simply as amusing curiosities.

Meteorite impacts on Mars are important to InSight in a completely different way, since each impact is capable of generating the shock waves that seismologists so eagerly await.

To understand the usefulness of meteorite impacts to the InSight mission, it is necessary to look a little more closely at what happens during an impact, on the understanding that there are differences according to whether the meteorite falls on Earth, the Moon or Mars.

The dynamics of an impact

When an asteroid crashes into our planet, it first strikes dense layers of atmosphere at incredible speed, more than ten kilometres per second. Air friction causes the projectile to heat up considerably, at which point most are completely vaporised before they reach the ground. The descent of an impacting body produces first and foremost an acoustic shock wave that propagates ahead of it and strikes the ground violently, leaving a visible trace on seismographs.

If the impacting body is not totally consumed during its passage through the atmosphere, part of its mass may reach the surface and blast out a crater. The energy released by the collision then creates new shock waves that differ from those generated by the atmospheric blast, but which are just as interesting to intercept and study. 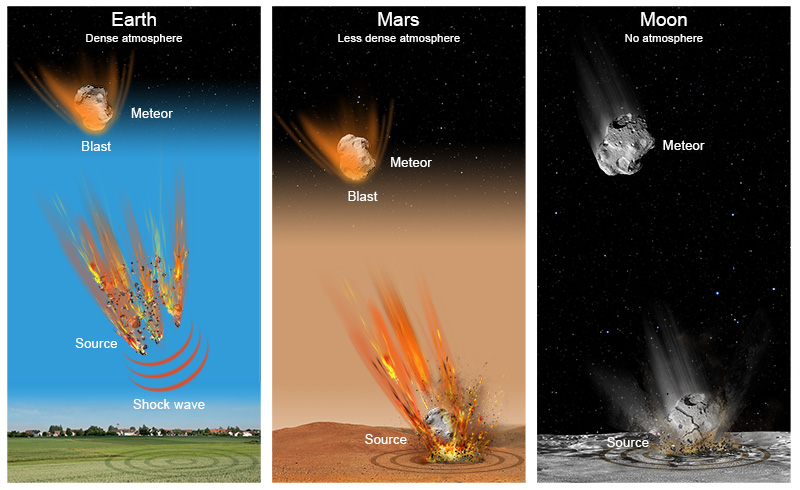 Mechanism of an asteroid impact: comparison between Earth, the Moon and Mars (© David Ducros).

However, the mechanism we have just described varies with the nature of the planetary body. Having no atmosphere at all, the Moon obviously provides no resistance to falling meteorites, which arrive intact on the surface and strike the lunar soil with full force. The network of seismic stations left on the Moon by the astronauts from the Apollo missions has detected thousands of meteorite impacts, helping to characterise the inner depths of our own natural satellite. These impacts represent about 20% of the quakes observed by the Apollo seismic network. 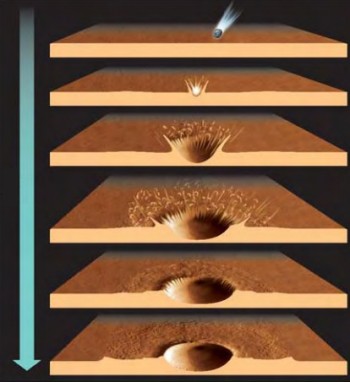 Mechanism behind the formation of an impact crater (© rights reserved/ Belin).

On Mars, the fall of a meteorite is accompanied not only by a shock wave that propagates through the air but also by a cluster of seismic waves related to the surface impact itself and the related excavation of a crater.

Although the Martian soil could significantly attenuate the atmospheric shock wave because of the broken nature of its surface, the energy waves generated by the impact with the surface could on the other hand travel great distances over the surface and be used to advantage in determining Mars’ internal structure.

The main problem is related to the energy released by the impact. The small impacts that create craters of just a few metres in diameter are statistically far more numerous than the impacts that can hollow out a crater 100 metres wide. However, it is the latter that are of interest because of the energy they liberate. Small impacts are less likely to be detected, and hence allow the deep interior of the planet to be probed.

An impact capable of making a crater on Mars 100 metres in diameter occurs roughly every 10 years. It is therefore highly unlikely that InSight will witness such an event during its stay on Mars. Unless the mission is very lucky, it must instead count on much weaker impacts that will only shed light on the near-surface structure between the probe and the crater.

Besides the fact that they can generate seismic waves similar to those released by conventional quakes, and just as useful for probing the planetary depths, impacts have a second advantage.

With just a single seismometer, InSight cannot triangulate a quake to locate its epicentre. The position of a quake, as well as its depth, on the Martian globe cannot be known to any great precision.

An iron meteorite discovered by Curiosity in the Gale impact crater (© NASA/JPL-Caltech/LANL/CNES/IRAP/LPGNantes/CNRS/IAS/MSSS).

The situation is completely different for impacts, since these leave visible scars on the Martian crust.

The following scenario might therefore take place. A meteorite impacts the region where InSight has set down. The shock liberates seismic waves that reach the lander and are then registered by the SEIS seismometer. Suitably processed, the seismic signals can approximately locate the point of impact. The coordinates are transmitted to Mars Reconnaissance Orbiter, which then makes several fly-bys to photograph the target region.

The aim is to identify the traces of an impact on the surface. However, this operation is only possible if that sector has already been imaged before. If an impact appears on an image it will be impossible to know if it has just been produced or if, on the other hand, it dates back several years without having been noticed. 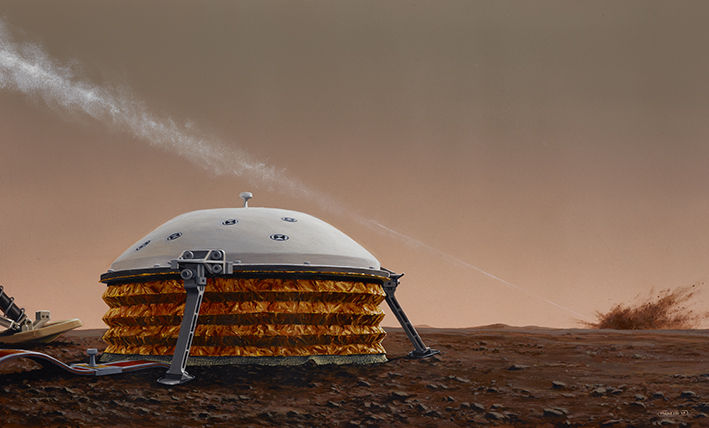 Artist’s impression of a impact on Mars near the InSight probe (© IPGP/Manchu/Bureau 21).

In preparation for the arrival of InSight, Mars Reconnaissance Orbiter has been carrying out the painstaking work of criss-crossing a region of roughly 5,000 km2 around the landing site. The data collected will be used to create a map to serve as a baseline for identifying new impacts. 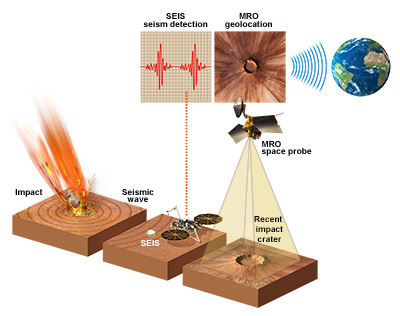 Collaboration between InSight and Mars Reconnaissance Orbiter for the localisation of an impact-type seismic source (© IPGP/David Ducros).

Hence, if in the sector indicated by SEIS an impact crater should appear on a previously virgin surface, the position of the source of seismic waves will have been determined with remarkable precision. The mathematical algorithms used to process the signals registered by the seismometer will be refined, thus making future location operations even more reliable.

By documenting the rate of impacts currently striking the surface of Mars, InSight will also be able to refine the dating of the Martian terrain (the basic rule is that the older the terrain, the bigger and more numerous craters it contains). The danger inherent in falling meteorites for crewed missions will also be better qualified. Last but not least, it should be noted that InSight can only measure the meteorite flux in terms of events (number of impacts per year) and not in terms of the mass deposited on the surface by the impacts.