A mechanism of unprecedented precision

The SEIS seismometer consists of three sophisticated pendulums sensitive to a broad range of vibrations and firmly attached inside a titanium sphere in strict vacuum conditions. They are thus qualified to be called Very Broad Band (VBB) sensors. Designed from scratch for the Martian environment (which is far more hostile than that of Earth), SEIS leaves little to be desired when compared to the best terrestrial seismometers. Although its performance is inferior to the best instrument on the market, that instrument is ten times heavier, and very power-hungry.

A two-part pendulum joined by a pivot 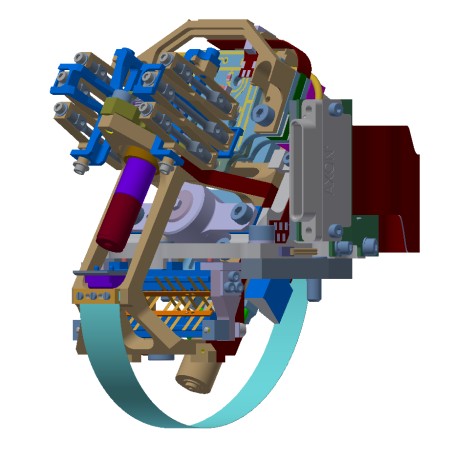 As with all terrestrial seismometers, VBB pendulums have a moving part that oscillates with respect to a fixed part. This oscillation is driven by the seismic disturbances transmitted to the instrument through the ground. A lamellar, strip-type pivot with a quite astonishing operating principle allows the moving part to articulate with respect to the fixed part and is effectively the pendulum's axis of rotation. It was designed to allow extremely small movements (of very low amplitude) to occur with complete freedom in the absence of any intervening friction. Fixed (in red) and mobile part (in green) of a VBB pendulum (© IPGP/david Ducros).

Imagine a flexible rod firmly anchored to a fixed base with a mass attached at the top. It is easy to understand that such a precariously balanced device is sensitive to the slightest vibration. It is also clear that, at the slightest nudge, the mass will tend to flop irreversibly over to the right or left unless the system has been designed and balanced with sufficient care.

The inherent instability of the inverted pendulum makes it more sensitive than the conventional pendulum, even with a lightweight mobile mass, which is a huge advantage in the space sector. The SEIS mobile mass is just 190 grams, as opposed to the far heavier masses of terrestrial seismometers, which are not far off 1 kilogram for the best instruments.

Although unstable by their very nature, the inverted pendulums in the SEIS seismometer maintain their equilibrium using a lamellar spring formed into a semicircle; this continuously applies a restoring force to the mobile mass, thereby preventing it from ultimately conceding to the force of gravity.

Each spring is unique, and none is interchangeable among the three SEIS pendulums. They are individually manufactured and take into account the characteristics of the pivots, which are also unique.

None of the three pendulums is therefore identical either; each has its own personality. The tailoring performance of the engineers responsible for designing and manufacturing these technological gems matches that of any top fashion house. Side view of a Very Broad Band (VBB) pendulum (© IPGP).

A feedback system, which uses an electromagnetic coil to continuously feed back the location of the pendulum relative to its equilibrium position, further increases the performance of the seismometer, in particular for very slow displacements of the ground.

For any given pendulum, the moving part can be displaced in only one spatial direction, which is defined by the pivot’s axis of rotation. The InSight seismometer is a three-axis instrument, i.e. it consists of one pendulum for each direction in space, making three in all.

It would be logical to think that one of the pendulums would be positioned vertically, the other two being disposed horizontally. In reality, although the three pendulums are mutually at right angles, they are actually inclined obliquely at 32.5° to the horizontal. Although it might appear strange, this arrangement distributes the noise over all three axes and consequently increases the signal to noise ratio.

With an oblique geometry, any jolt or vibration will cause the three axes to react with varying intensities. Let us take the case of a purely vertical impulse acting on a three-axis seismometer whose sensors are aligned exactly along the three spatial directions: one vertical and two horizontal pendulums. In this case, we see that only the vertical sensor is excited; the impulse, having only a vertical component, is effectively invisible to the horizontal pendulums. 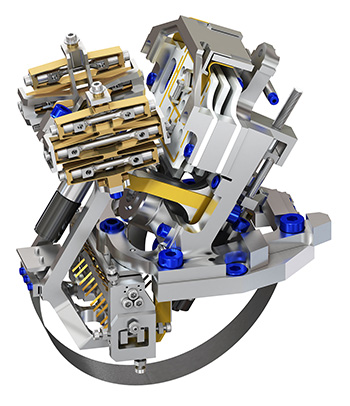 On the other hand, if the group of three sensors are inclined slightly, a purely vertical impulse will induce a signal in each of them. The strongest signal will be recorded by the sensor that is closest to the vertical, but the other two will also register something. In a sense, we can say that an oblique configuration distributes (and therefore divides) the noise level over all three sensors, rather than being concentrated on just one. Although this configuration requires all three sensors to register vertical motions, it has been adopted by InSight quite simply because it allows a 3-axis instrument to be built using the same type of sensor.

A sophisticated equilibrating mechanism enables the pendulum to adapt to Martian conditions, such as the reduced gravity or an inclination due to the surface on which the seismometer rests (unless corrected by the levelling system). A thermal compensation device and supporting mechanism (TCDM) will enable the pendulums to adjust to daily and seasonal temperature variations.

All the electronics in the instrument are also designed to withstand the radiation to which they will be subjected on their trip from Earth to Mars (cruise phase), as well as the operating temperatures on Mars, which are significantly lower than those encountered in terrestrial geophysical observatories (except for those deployed in the Antarctic). 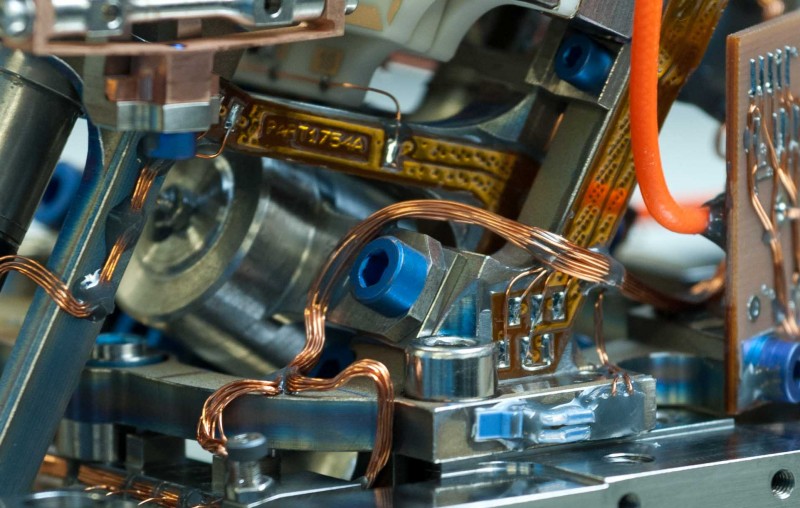 Because of the huge temperature contrasts that are a feature of the Martian weather, project engineers have had to isolate the pendulums from the external environment as far as possible by an extraordinary number of insulating layers. This is the case, for example, of the evacuated container which contains the pendulums in a vacuum, the RWEB (Remote Warm Enclosure Box) which contains the sphere, plus the dome-shaped WTS (Wind and Thermal Shield) which covers the whole assembly.

However, despite these precautions, the temperature within the sphere will vary slowly and inevitably with the passage of time, by about 20 degrees in summer and 10 degrees or so in winter. The TCDM will finely adjust the pendulums’ centre of gravity, needed to compensate for any sudden temperature fluctuations and obtain the best seismic sensor performance.