The tidal forces exerted by Phobos, one of Mars’ two moons, will shed light on the planet’s core

Mars is accompanied on its journey around the Sun by two small irregularly-shaped moons, Phobos and Deimos. Phobos is some 27 km long from pole to pole, whereas the even smaller Deimos is just 15 km long.

The two moons look very much like asteroids: shaped like a potato, they have a very dark grey, almost black, surface marked by many craters. At first glance, they look very different from the Earth’s moon, which is much bigger and spherical. Yet the two Martian moons share a feature in common with the Moon, because all three are gravitationally locked to the planet around which they orbit, and therefore exert tidal forces on that planet. 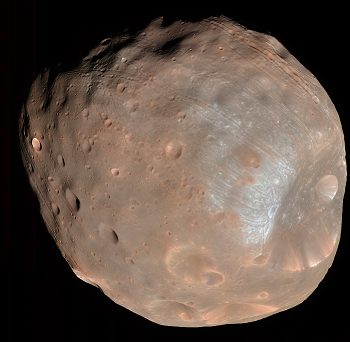 When you talk of tides, the first image that comes to mind is that of a beach with waves rolling up the golden sand before returning to the sea. What is less well known is that this regular phenomenon, which sets the pace of numerous activities on Earth, is due to the influence of stellar and planetary bodies (mainly the Sun and Moon) on liquid masses.

Despite the distance separating it from the Earth—some 384,400 km—the Moon is surrounded by a field of gravity that locks onto our own planet and grasps it in invisible claws, with astonishing consequences.

The effect is especially visible on seas and oceans because they are made of liquid. The difference between high and low tide is measured in metres. When the Moon passes over land, it also bulges, but the effect on land is much harder to see than the effect on water. The “tidal bulge” of land surfaces results in a deformation measured in millimetres or, occasionally, centimetres.

From its orbit 6,000 km above Mars, and despite being so small, Phobos also exerts tidal forces on the Red Planet. Its presence subtly deforms the planet, which bulges by a fraction of a millimetre along the path followed by Phobos. 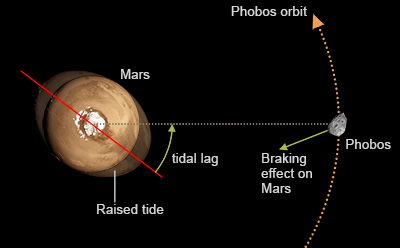 Mechanism of action of the attraction force of the Moon Phobos on Mars (© IPGP / David Ducros).

You might think that the bulge on Mars caused by Phobos’ attraction should lie exactly underneath the moon, but things are not that simple. The bulge does not occur exactly when Phobos flies over a given region, but appears after a certain delay, due to the fact that part of the energy transmitted by Phobos is absorbed by Mars.

As the law of conservation of energy applies to this celestial dance between Mars and Phobos, the exchange of energy between the small moon and the Red Planet has an important effect on the moon’s orbit. Each year, Phobos drops about one centimetre closer. Slowly but surely, Mars’ moon is falling toward its surface.

In several dozen millions of years, Phobos will be so close to the Red Planet that it will literally be ripped apart by these relentless tidal forces. When the moon crosses the Roche limit, the tidal forces will be greater than the moon’s force of internal cohesion, and the moon will break up. A shower of fragments will then fall onto Mars, though the majority of Phobos’ remains may form a ring around the Red Planet.

Phobos: a trump card for InSight 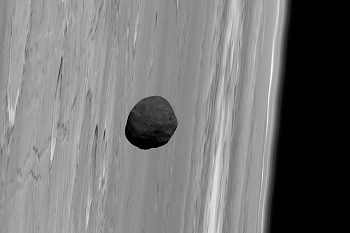 Phobos above the Martian surface (© NASA).

Phobos is of particular benefit for the InSight mission. The SEIS seismometer flown aboard the probe is so sensitive that it will be able to detect and measure the smallest gravitational attraction that Phobos exerts on Mars whenever it passes over the Elysium Planitia landing site.

Phobos is of special interest because its orbit around Mars is not linked to other phenomena such as the day/night cycle. The small satellite revolves once around the planet every 7 h and 39 min, so passes over the same area three times a day.

The signal generated by Phobos will be recorded in particular by the seismometer’s vertical axis. However, the deformation related to tidal forces is so small that it will be impossible at first to distinguish it from the instrument’s self-noise.

By superimposing data covering several months or, even better, a full year, seismologists should nonetheless be able to extract and quantify the tidal forces generated by Phobos. This is the trickiest experiment of the whole mission. To be able to distinguish the influence of Phobos, the noise level must remain acceptable. If it is ten times greater than the signal, it will not be possible to identify even if long-term measurements are available for integration.

Characterizing the tidal forces exerted by Phobos opens up the possibility of probing the depths of Mars, and more particularly its core. Depending whether the core is liquid or solid, it will not be deformed in the same way. Its radius will also be determined within around 60 km, these data complementing those provided by RISE.

Even if InSight is unlucky enough not to witness a single seismic event, marsquake or meteorite impact throughout the mission, the probe will still be able to fulfil some of its objectives through Phobos.

In the world of space exploration, scientists try to take advantage of each and every phenomenon, however discreet it may be. Although orbiting several thousand kilometres above the Martian surface, the larger of Mars’s two natural satellites could make a significant contribution to the investigation of the planet’s interior structure.