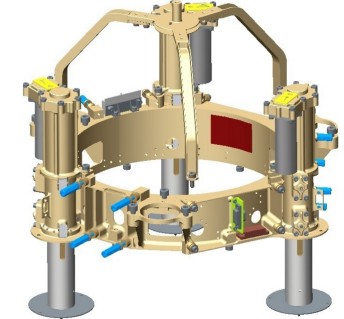 A pictorial 3D representation of the levelling system. This consists of a ring to which are attached three telescopic legs, three proximity electronics units for the VBB pendulums, the three short-period sensors and finally the devices that allow the assembly to be handled by the robotic arm on the InSight probe (© NASA).

In order to be able to operate under the most favourable conditions, the SEIS seismometer should ideally be placed on as flat and as horizontal a surface as possible.

On Earth, a slab of concrete would have been poured and SEIS would have been levelled using knurled screws. On the Moon, and as with the Apollo programme, an astronaut would have manually levelled the instrument using a spirit level after having oriented one of its axes towards Earth. On Mars, obviously none of this will be possible.

Project engineers have therefore designed an ingenious mechanism in the form of a cradle, within which is placed the sphere containing the VBB pendulums. This structure has three electrically motorized legs.

Once the instrument has been placed on the ground by the InSight lander's robotic arm, inclinometers placed on the structure of the cradle will measure its angle.

For maximum performance, the pendulums inside the sphere must be positioned at a certain angle with respect to the direction of Martian gravity (the gravity vector being parallel to the vertical). Inside the sphere the pendulums have been mounted at a slant such that they form an angle of 30.5° with the horizontal. This angle must be complied with once on Mars, and the only way to do this is to ensure that the sphere is positioned perfectly horizontally.

It is highly probable that, after having been deployed by the robotic arm, the SEIS instrument will find itself on a slightly sloping surface or that one of its legs will be resting on a stone. In this particular instance the project team will undoubtedly choose to reposition the seismometer, but regardless of the efforts made to ensure that the instrument ends up on the flattest possible area, the situation will never be perfect. 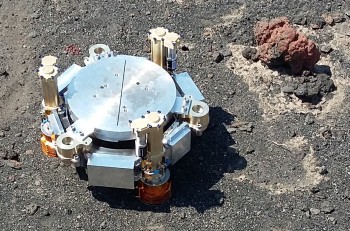 Cradle levelling test for the SEIS seismometer on the Aeolian island of Vulcano, Italy, in June 2016. The metal disc visible on top of the platform will not be present on the flight model. Here it serves as a support for a terrestrial seismometer used during the tests in the absence of the Martian SEIS seismometer (© Brigitte Knapmeyer-Endrun).

The motorized legs of the cradle come into play at this point. With a maximum vertical displacement of 6 cm, the legs are able to retract or extend to ensure the sphere is perfectly horizontal to within 0.1°. This mechanism will allow the SEIS instrument to accommodate slopes up to 15°.

The second job of the cradle is to ensure optimum contact with the ground, given that it will not be possible to register any worthwhile seismic signal unless there is good coupling with the Martian surface that remains stable over time.

The motorized legs therefore end in a conical point to facilitate penetration of the ground and increase instrument stability. A metal ring slightly higher up the leg will prevent too deep a penetration and improve contact with the ground. Finally, small collars made of insulating material will protect the motors from the Martian dust and insulate the legs against variations in temperature.

Finally, a special calibration mechanism will allow a very subtle and known inclination to be applied to the cradle; this will serve to calibrate the pendulums so that they will then be able to measure the tides on Mars' moon, Phobos.

The levelling mechanism was developed by the Max Planck Institute in Germany.