Is Mars cracking from the inside? 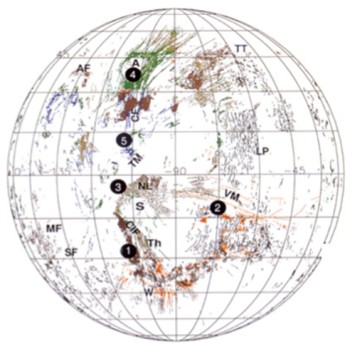 Geographical location of faults on Mars. By mapping ancient faults, the movements to which the crust has been subjected in the past can be determined. (© Anderson, 2001).

The vast majority of earthquakes on Earth are related to plate tectonics. The surface of our planet is divided up into plates that are in constant relative motion. Wherever the plates are separating, colliding or slipping, enormous tensions build up. These tensions are subsequently released during earthquakes.

Based on their current understanding, planetary scientists do not believe that tectonic plates have ever existed on Mars. It appears to be a planet whose surface has never fragmented into moving plates. Consequently, any seismic activity is likely to be much less intense than on Earth.

While terrestrial earthquakes are concentrated mainly along the boundaries of the plates in the lithosphere, some take place within the plates themselves. Known as intraplate earthquakes, these are mainly caused by the slow cooling of fairly deep rocks. As they lose heat, rocky materials contract and build up tension that is eventually released, resulting in an earthquake. Geophysicists believe that the Martian globe could be a source of tremors similar to intraplate earthquakes. However, do we have any proof that they exist? 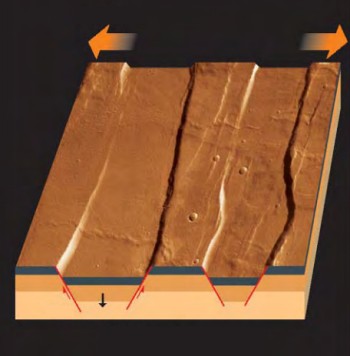 Mechanism behind the formation of an extensive fault (© rights reserved / Belin).

So far, no reliable data for assessing Martian seismic activity has ever been obtained. The only functional seismometer ever to operate on the Red Planet, flown on the American Viking 2 probe in 1976, unfortunately failed to provide any convincing information due to disturbances caused by the wind.

Quakes are caused by the build-up of stress in rocky material which, slowly but surely, eventually leads to an abrupt rupture. A slab of rock that once formed a cohesive unit is suddenly split in two, each half being mutually displaced. The rupture zone gives rise to a fault that could quite well reach the surface of the planet, even if the quake took place at some depth. The slabs slip on either side of the fault, sometimes over great distances, and sometimes causing spectacular changes to the landscape.

Thanks to the many satellites orbiting Mars that are flying increasingly powerful and sophisticated instruments, we now have a very good understanding of the characteristics of the Martian surface. The images provided by these orbiting cameras clearly show the presence of fault lines scarring the Martian crust.

A minutely detailed map of the faults criss-crossing the surface of Mars, spread over the course of Martian geological time, has enabled five major periods to be identified during which tectonic activity has taken place. The energy released during the event has been assessed by determining the length of the faults and estimating both their depth and the rigidity of the rocks.

It has also been possible to identify the regions that were most seismically active in the past by counting the number of faults visible on the surface. Such is the case, for example, of the dome of Tharsis, an immense bulge in the Martian surface that supports giant volcanoes more than 10 km high.

During its formation, the dome of Tharsis exerted huge stresses on the crust, which is fissured in a great number of places. The huge scar of Valles Marineris, a complex of gigantic canyons 4,000 km long and up to 7 km deep encircling Mars’ equator, was probably opened up following the Tharsis uplift. Valles Marineris is, without a doubt, one of the most impressive tectonic structures in the solar system, even though once they were formed, the canyons were widened by other geological processes such as erosion or landslides.

Mars in a Minute video series : Are There Quakes on Mars ? (© JPL-Caltech).

Although geophysicists reckon that most of the quakes that have occurred on Mars up to now have not produced any ruptures at the surface (and therefore cannot be observed by orbiters), analyses confirm that Mars has undergone (and is probably still undergoing) significant seismic activity of an order of magnitude similar to that of intraplate earthquakes. The SEIS seismometer on the InSight probe therefore has a very good chance of observing tremors on Mars for the first time in the history of Martian exploration. 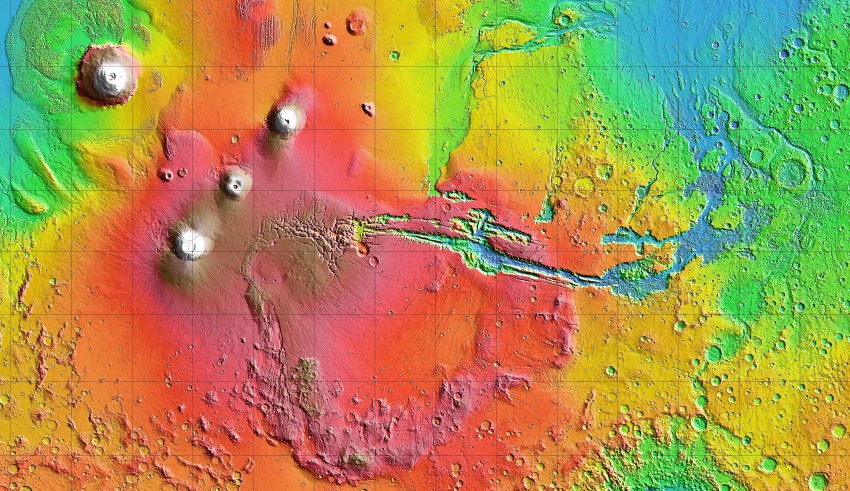 Elevation map of the Martian surface showing the dome of Tharsis (left) and the huge Valles Marineris canyon (centre). These two regions must have undergone intense seismic activity in the past (© MOLA Team/NASA).