For the first time ever, a space mission is going to investigate the core of Mars

Scheduled for lift-off in May 2018, the InSight mission will be a dream come true for geophysicists, who have long wanted to send a seismometer to Mars to study the tremors that are still rippling through the desolate lands of the Red Planet. They will at long last be able to lay bare the secrets hidden deep inside.

The secret of an extraordinary destiny 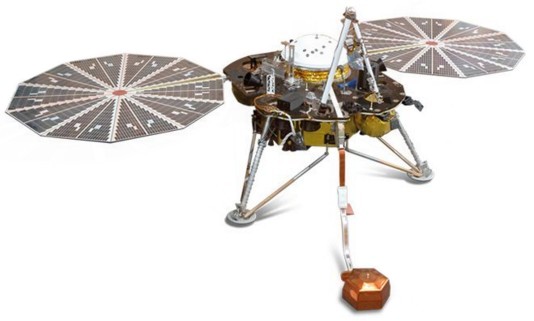 The InSight lander with its two solar arrays deployed. The seismometer is visible on the ground, attached to the probe by a flexible tether (© NASA/JPL).

While the Martian surface is revealing more and more of its secrets thanks to the satellites that have monitored it from above and the probes that have landed there, the interior of Mars remains unknown, as no past missions have ever explored it.

Yet it is deep in the heart of the planet that lie some of the answers to the mystery surrounding Mars: why did this planet, which was so similar to Earth 3 to 4 billion years ago, have such a dramatically different destiny? Why is what was once a hospitable planet with a protective magnetic field, a thick atmosphere and intense volcanic activity—a place where liquid water could freely run over its surface—now a barren, frozen planet stuck in a torpor that nothing can now overcome? Why is our own planet, Earth, so extraordinarily different?

A planet’s ability to become—and remain—habitable, is intrinsically linked to the power of its internal heat processes.

Seismology, an extremely powerful investigative tool, is the discipline that studies the characteristics of seismic waves emitted by earthquakes and the way they are propagated, even all the way to the centre of the Earth. Over about a century, geophysicists have patiently pieced together the jigsaw so as to understand what lies underneath our feet. Gradually, we have discovered that, just like an apricot, the Earth has a crust (its “skin”), a mantle (its “flesh”) and a core (its “kernel”).

The Earth’s core is composed of metal, the outer part of which is molten. The electrical currents passing through it generate a magnetic field which protects our world from the Sun’s lethal radiation and charged particles. The rocks making up the mantle are so hot they actually soften and partly melt, being able to move around one centimetre a year. Driven by the planet’s inner heat, the mantle is where slow but extremely powerful movements take place that are responsible for shifting continents and oceans.

Martian seismology: an opportunity every 20 years

Unsurprisingly, having set up seismometers on the Moon, geophysicists then turned their attention to Mars, of far greater interest because it is much more similar to Earth from a geological point of view.

Unfortunately, space missions have focused on looking for signs of life (whether past or present), leaving very little room for geophysicists. Seismometers have simply been left out of the picture.

Up to now, only two seismometers have ever reached the Martian surface. Forty years ago, the two Viking missions succeeded in placing seismic instruments on Mars, but their operating conditions were such that no clear, meaningful measurements were able to be taken.

In 1996, 20 years after this first attempt, a new attempt was made with Russia’s Mars 96 probe. To the huge dismay of the teams involved, the spacecraft never even managed to leave Earth orbit.

In 2018, a little over 20 years after Mars 96, it will be the turn of the InSight probe to take up the challenge. Its lander is equipped with a single seismometer which is designed to be as robust as it is sophisticated. Its extremely sensitive but fragile mechanisms should record the planet’s seismic activity for the first time ever. 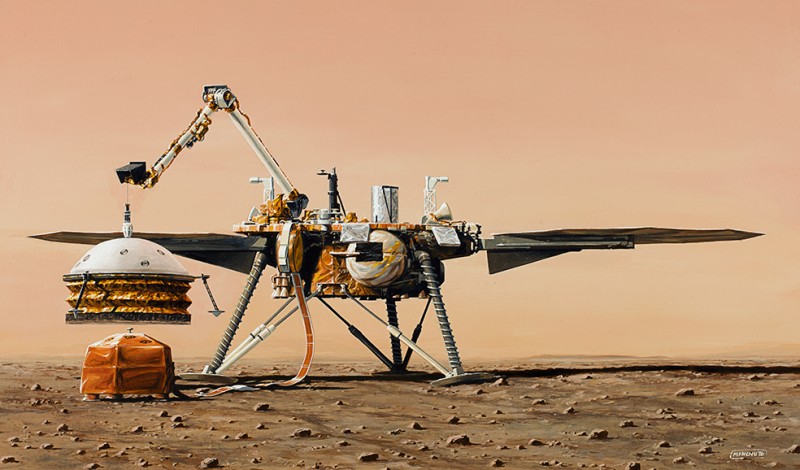 Unlike the Viking probes back in 1976, InSight has a robotic arm to place the seismometer on the ground for more efficient performance. Before its launch, the instrument— currently protected by multiple insulating layers—will be covered by a shield to protect it from wind and temperature variations. On Earth, seismometers are always buried, but this is not yet feasible on Mars (© IPGP/Manchu/Bureau 21).

An amazingly precise yet complex mechanism

The result of 20 years of relentless effort, InSight’s Seismic Experiment for Interior Structure (SEIS) is a technological masterpiece. Its truly unique mechanism has been specifically designed to operate in the hostile Martian environment.

It is one thousand times more sensitive than the seismometer flown on the Viking probes, and will be placed directly on the ground by a robotic arm, whereas the Viking seismometers were attached to the lander.

Under its multiple layers of thermal insulation, designed to protect it from the huge differences in temperature between the Martian day and night, it will for two Earth years patiently listen out for the least tremor on Mars’ surface. Practically nothing will escape its attention. SEIS is so sensitive that it can measure infinitesimally small movements on an atomic scale! If the ground moves by a distance of less than the breadth of one hydrogen atom, the instrument will still record the motion!

Durability and robustness are crucial characteristics for any instrument designed to be sent to Mars. SEIS’s additional challenge is that it will be alone throughout its mission.

Unlike terrestrial seismometers, that are networked so that together they can be used to pinpoint an earthquake, for at least two years SEIS will remain alone on its landing site, an equatorial plain in an area of Mars called Elysium Planitia. The rover belonging to the ExoMARS mission, which will be fitted with a seismometer developed by Russian Space Research Institute IKI, will only be launched in 2020.

Yet, by implementing sophisticated data processing techniques along with some clever tricks of the trade, geophysicists will be able to use a single seismic station to do the job that previously required several dozen seismometers.

No tremors? No problem: InSight has two aces up its sleeve 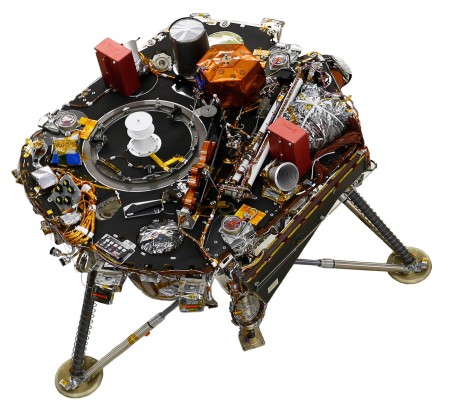 Top view of the InSight probe’s science payload. The ultra-sensitive pressure sensor is visible in white. You can also see the SEIS seismometer’s hexagonal thermal protection and the two red housings that protect the TWINS (Temperature and Winds for InSight) sensors (© NASA/JPL-Caltech/Lockheed Martin).

What if Mars remains silent? What if nothing at all disturbs either the surface or the depths of this planet as it constantly orbits the Sun?

In this case, taken into account by scientists, SEIS will still fulfil its mission thanks to three allies: meteorite impacts, the tides of Phobos (one of Mars’ two moons), and atmospheric tremors.

Meteorites regularly fall from space onto Mars' rust-red surface, and their impact not only forms craters but releases a huge amount of energy. Some of this energy is released as a shockwave, which is exactly what SEIS will be listening out for.

Guided by the seismometer’s indications, the very-high-resolution cameras of the US Mars Reconnaissance Orbiter (MRO) and of the ExoMars mission’s Trace Gas Orbiter will then be able to seek out and photograph the impact, providing information that will in turn be used to considerably refine SEIS data.

The second ace is Phobos, one of the two natural satellites of Mars. On Earth, the tides that are so appreciated by holidaymakers are due to the Moon’s force of gravitational attraction, which mainly affects the Earth’s liquid masses i.e. the oceans and seas. Mars only has two very small natural satellites, yet their mass still manages to deform the Red Planet’s solid surface. Although this motion is minimal, the effect of the nearest moon—Phobos—can still be detected.

By accumulating data over an Earth year, SEIS will measure the bulging of the crust due to Phobos, which will provide information on the nature of Mars’ metallic core. Even without tremors of any kind, the core must surely reveal the mystery of whether it is liquid, solid or both.

Finally, the surface of Mars is relentlessly swept by winds, and its atmosphere disturbed by whirlwinds and turbulence that constantly generate variations in pressure at ground level. If we compare a quake to a drum stick, this turbulence is like a drum brush: a source of constant quivering which ends up making the planet hum and vibrate even without any tremors. This distinctive excitation of the planet by its atmosphere will also shed light on its interior structure. 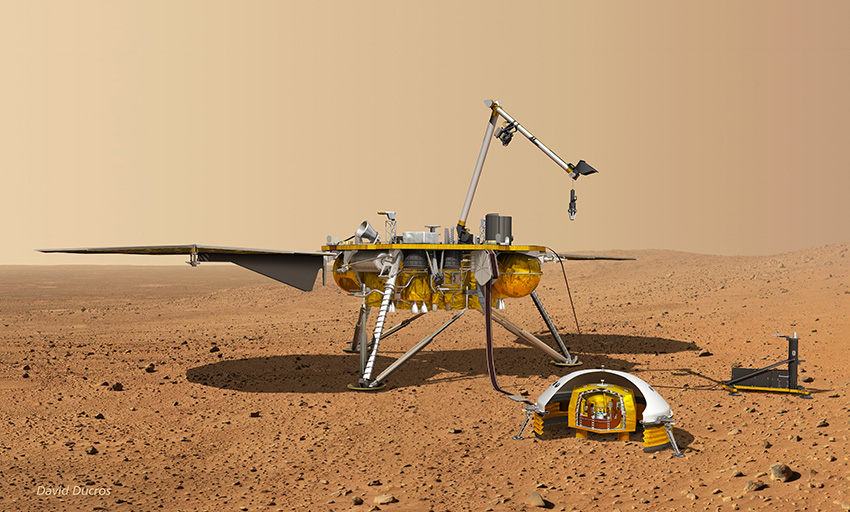 The InSight probe on the Martian surface, with its payload deployed (© David Ducros).

In its quest to reveal the mysteries buried deep inside Mars, SEIS will be accompanied by several other instruments. The InSight spacecraft is a comprehensive geophysics observatory, with its own meteorological station, a probe designed to measure heat flowing from the interior up to the surface, and a magnetometer. The radio signals will also be used to accurately determine how Mars spins on its own axis and to pinpoint with GPS precision the station’s position with respect to Earth.

InSight offers no less than a journey into the very heart of Mars, and by extension, into the heart of planetary worlds that have been orbiting the Sun for billions of years and have constantly accompanied the Earth on its interminable cosmic voyage.