The selection of a landing site on Mars has to comply with two main constraints. The first is technical, and of interest mainly to the engineers involved, whose principle concern is to land the probe for which they are responsible safe and sound on the Martian soil. The second is scientific, and of particular interest to the mission investigators. The ideal landing site for them is an area where scientific experiments may be carried out in good conditions, and where there is maximum potential for discovery. 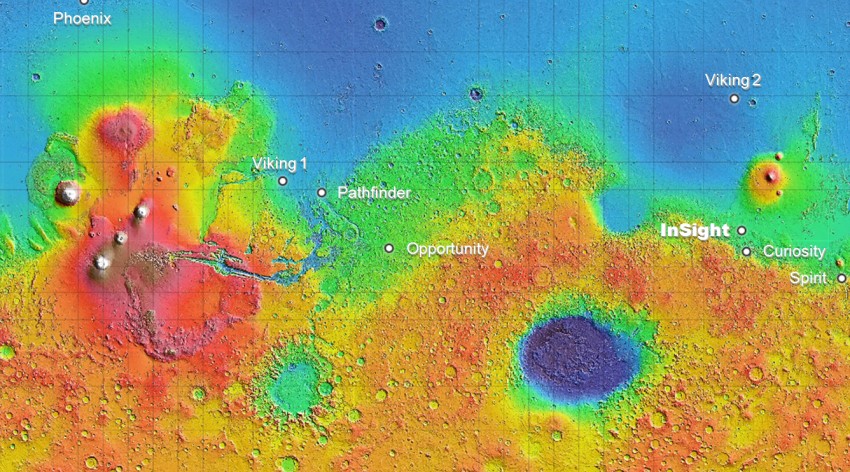 Map of Mars showing the landing sites of the main Martian probes (© NASA).

Mission engineers are particularly interested in factors able to reduce the level of risk during landing. As the atmosphere helps to brake the probe during its descent, a low-altitude site is preferred in order to benefit from the thickest layer of air possible. A plain or depression will thus be more attractive than the summit of a volcano, for example. The engineers will also try to avoid steep, slippery slopes, a surface littered with large rocks or uneven ground with crevices or impact craters.

The ideal landing site is a naturally flat and unobstructed surface resembling a parking spot. Once the probe has landed, it must survive the hostile, demanding environment of Mars. The quality of solar illumination, along with daytime and night-time temperatures, are thus essential from this point of view. InSight’s engineers are not concerned as to whether the area is monotonous and of little geological interest, or that the first promising rocky outcrops are out of reach. Their main concern is to land the probe safely, because if the landing fails, there will be no scientific activity anyway. The driving factor is safety, whether during or after the landing.

Obviously, if after travelling several hundred million kilometres through space the probe arrives safe and sound but in an area of Mars of little scientific interest, it is not worth all the effort.

Scientists therefore insist on engineers accepting a certain level of risk so as to have the chance of exploring the most remarkable areas of the Red Planet.

In the light of the above, it is easy to see that the landing site selection process is long and complicated, with numerous discussions between engineers on one side and scientists on the other.

The choice of InSight’s landing site was broken down into several steps. In September 2010, the selection committee definitively chose the Elysium Planitia region. Unusually, all the target zones identified by ellipses remained within this area. At this early stage in the selection process, it is more common to have the ellipses scattered all over the surface of Mars. This was not the case for InSight, which shows the importance given to engineering constraints.

The selection of a landing site for InSight was relatively simple, unlike that for previous missions to Mars, from the Viking probes of 1976 to the Curiosity rover in 2012. The main reason for this is that the lander is a geophysical measuring station and therefore the scientific investigators are more interested in what is going on underneath the surface than what is happening on top.

View of the InSight landing site on Elysium Planitia by the HiRISE camera on Mars Reconnaissance Orbiter (central part of the landing ellipse). This region is one of the flattest and safest areas of the Red Planet, but it is not totally flat. The photo shows a group of impact craters, some of which could be the secondary craters of the Corinto crater about 1,000 km north. (© NASA/JPL-Caltech/Univ. of Arizona).

Much to the delight of the engineers involved, any flat site—however mundane—was potentially acceptable. The rule applied when selecting the InSight landing site was quite simply “land safely.”

Ideally, if the geophysicists could choose freely, ignoring landing constraints, InSight would have been sent to that part of Mars that appears the most affected by quakes, i.e. Tharsis. This huge swelling in the Martian crust, home to many huge volcanoes, appears to have gone through periods of intense seismic activity. Unfortunately, it is too high to allow a safe parachute-braked descent.

By May 2012, there were still around 20 potential sites in the running. By July 2013, participants had managed to whittle down the shortlist to four sites, and in January 2015, the final ellipse was chosen, as was a backup area should the first choice turn out to be impracticable. 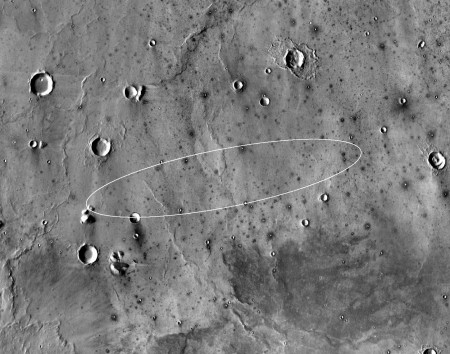 On 26 November 2018, InSight will land on Elysium Planitia, an equatorial region at 4° N.

Elysium is a Latin term also known as the Elysian Fields, an area in Greek mythology where humans were judged after their death and where the righteous could live and finally rest from their labours. Should you ever have the chance to stroll along the Champs-Elysées in Paris, spare a thought for Mars and InSight !

The site is quite ancient (dating back to the Hesperian era, some 4 to 3.5 billion years ago), and its surface is flat with few rocks. There is no relief or steep slope likely to fool the descent radar.

The probe should be able to land upright without finding itself in a precarious position with one leg on a rock. The petal-like solar arrays should be able to open without hindrance from any obstacles. There are no thick layers of dust into which the probe could sink, rather like quicksand. The layer of dust deposited in this region by the atmosphere is less than 1 mm thick.

The ground should be perfect for the mission. The top layer, or regolith, is made up of crumbly, crushed rock thick enough yet not too solid to allow the HP3 mole to burrow down without too much difficulty. 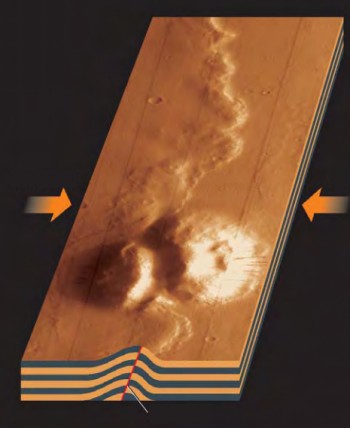 InSight’s landing site may give geologists the chance to study the wrinkle ridges there (© rights reserved).

The available sunshine will allow the solar arrays to operate efficiently and the probe to benefit from relatively mild temperatures, at least as far as Mars goes. Finally, the site’s altitude and wind strength will allow the parachute to brake the spacecraft properly during its descent without too much buffeting.

From a seismic viewpoint, Elysium Planitia is of less interest than Tharsis, but its proximity to the rugged area separating the highlands of the southern hemisphere from the flat lowlands of the northern hemisphere (the famous Martian dichotomy), nonetheless makes it of interest.

On the surface, geologists have identified formations that could be worth investigating. There are also wrinkle ridges and landforms shaped by water, the wind or sediments. Bear in mind, however, that InSight’s main objective is to study the inner depths of Mars, and not geological surface features.

Whatever progress has been made in the feat of landing an automated spacecraft on Mars, there remains some uncertainty as to where exactly the legs will touch down on the rust-coloured planet.

This uncertainty is translated in the case of InSight by a landing ellipse 130 km long and 27 km wide, which is a relatively big area. The ellipse represents the zone where the probe has a 99% likelihood of landing.

The centre of the ellipse is located at exactly 4° N and 136° E. InSight’s closest companion will be the Curiosity rover, which landed at a similar longitude, but on the other side of the equator, at 4.5° S. Further East, inside the Gusev Crater, is the Spirit rover, whose last transmission dates back to 22 March 2010.

Mars in a Minute video series : How Do You Choose a Landing Site ? (© JPL/Caltech).

InSight’s landing zone has already been photographed by the spy camera on the US Mars Reconnaissance Orbiter. The high-resolution images obtained up to now remain reassuring.

The study of different terrains within the landing ellipse will nevertheless continue up to the last moment, and if there is the slightest hitch, the probe will be directed to a backup site. If all goes according to plan, InSight’s landing site will be definitively confirmed in November 2017.