A miniature seismometer etched in a silicon chip

In addition to the Very Broad Band (VBB) pendulums, the SEIS seismometer will be supported in its task by a set of three short-period (SP) sensors that are sensitive to seismic waves whose frequency exceeds 1 Hz (1 cycle per second). 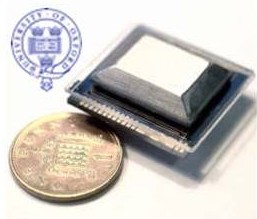 The SEIS instrument’s short-period sensor (© Imperial College London).The role of the short-period seismometer, which is not one of the mission-critical instruments, is to provide partial redundancy should the very broad band (VBB) seismometer fail. Sensitive to a frequency range (what geophysicists call “bandwidth”) from 0.1 to 40 Hz, it partially covers the band encompassed by the VBB pendulums.

Designed at the outset to register frequencies (up to 50 Hz) higher than those to which the VBB seismometer is geared, the short-period seismometer significantly extends the bandwidth within which the InSight mission can investigate seismic signals.

Put another way, the SP sensors can be seen, metaphorically speaking, as a second pair of ears. They will come to the aid of the InSight mission if the main pair of ears (the VBB) is struck down with deafness, and be able to hear strident signals that would otherwise be inaudible.

In contrast to the VBB pendulums, which have a significant mass and volume, the short-period seismic sensors have been considerably miniaturized. Ion-etched in a silicon wafer, they are lightweight and no bigger than a 1 euro coin. Each sensor’s mobile mass is of just 1 g, as against 190 g for the VBB pendulums.

The development of the SP microseismometer and its three associated sensors presented project engineers with several challenges, including that of being able to withstand the violent shocks associated with space missions during events such as lift-off and landing. During these brief but severe events, the InSight spacecraft will have to absorb considerable accelerations of a few hundred g or more. 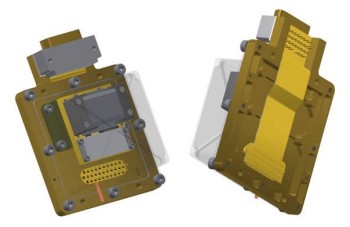 3D representation of the SEIS seismometer short-period sensor
(© Imperial College London).Seismometers being truly sensitive instruments designed to measure very tiny accelerations of just a few nano-g, it is not hard to understand that they will respond badly to violent shaking in all directions.

Nevertheless, the SP seismometer has been designed to withstand such mechanical affronts. Like the VBB pendulums, the mobile mass does not need to be locked during the flight (from launch to landing) since its propensity to move from side to side is restricted by stops.

Despite its small size and apparent simplicity, the SP seismometer can detect vibrations in all three spatial directions, i.e. one vertical and two horizontal axes (though in contrast to the VBB seismometer, the pendulums are not inclined). An arrangement of electrodes enables the displacement of the mobile mass to be measured. The system has been designed so that it can continue to function even if the horizontal levelling system has failed to achieve optimal positioning.

Under British responsibility, the SP seismometer has been designed and built by Oxford University and Imperial College London.