While a small part of the electronics controlling the SEIS seismometer has been installed close to the sphere containing the pendulums  (proximity electronics designed to pre-amplify the signals), most are some distance away on the InSight lander, inside an enclosure known as the eBOX.

With a mass of 5 kg and kept warm inside a specially designed compartment where it can function protected from the rigours of the Martian climate, the eBOX hosts nine electronic boards, all absolutely vital for the operation of SEIS.

The first electronic (DC) board controls the SEIS instrument power supply. The SEIS instrument receives from the lander electrical power at 28 V that it converts into the different voltages needed to operate the seismometer’s various components. Given its importance, there are two identical boards for purposes of redundancy. If the first one malfunctions, the second one can be used as a backup.

The InSight lander will be in sleep mode for most of the time, and it is expected that it will be woken up for only a few hours a day, in particular for transmitting data acquired by the instruments and activating the sensors. During these sleep phases, SEIS will be completely autonomous, and the power supply board, connected directly to the lander batteries, must therefore be extremely reliable. 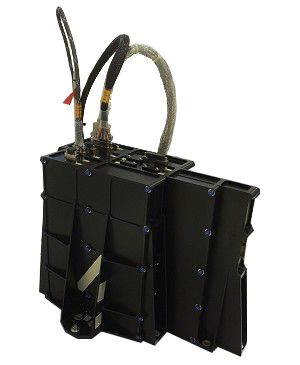 The second (AC) board is responsible for data acquisition and instrument control. It interfaces with the electronic feedback boards, those dedicated to the levelling system and the SP (short-period) micro-sensors.

This board provides the commands to initiate a VBB pendulum or choose between the SEIS instrument's two operating modes: engineering mode, for configuring the instrument, or science mode, for acquiring seismic signals.

The AC board also offers other functions such as short-circuit detection or the acquisition of data from environmental sensors such as temperature probes and various supply voltages, including power drawn from the lander for SEIS. It is connected to the InSight lander's Command and Data Handling system (C&DH) and, like the previous board, it is also redundant.

The eBOX houses three “feedback” boards, one per VBB pendulum.

Coupled to the feedback device (comprising a magnet and a set of 3 coils) fitted to each pendulum, these boards are responsible for managing the feedback loop, which ensures that at every instant the slightest movement of the mobile mass is counterbalanced by an exactly equal and opposite force, ensuring that the pendulums continuously return to their equilibrium position.

The feedback mechanism is essential, since it is from this that the seismic measurements come. What is actually read by the boards and sent back to the scientists on Earth is just the restoring force that serves at any instant to bring the mobile mass back to its equilibrium position. Another advantage of the feedback device is that it optimizes the performance of the VBB pendulums, reducing by a factor of 100 the effect of temperature variations on their mechanical properties. 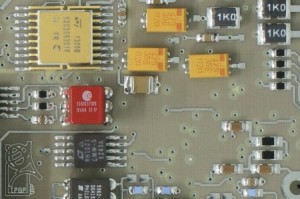 Detail of the feedback loop control board (© IPGP).

The last two boards housed in the eBOX are responsible for managing the short-period (SP) seismometer (which also has a feedback loop) and the levelling mechanism.

There is no redundancy for either the VBB sensors or the SP sensors. However, they both share the same range of measurements, between 0.02 and 100 seconds. The SP seismometers perform better for periods less than 0.2 seconds, while the VBB sensors perform better for periods longer than 0.2 seconds. If one of the six axes should be lost due to failure it will be replaced by the remaining ones, and the triaxial measurement of the acceleration of the Martian ground will thereby be maintained.

The levelling mechanism (LVL) has its own control board. Using the three motor-driven legs this system can very precisely align the SEIS instrument to the horizontal, and hence Martian gravity. Given that this mechanism will only be implemented at the very beginning of the mission, once the instrument has been placed on the ground by the robotic arm, the electronic control board is not redundant.

One of the characteristics of the eBOX is that it can acquire signals from the seismometer at very low noise levels. Given the effect that electronic noise could have on the performance of the sensors, the project’s electronics engineers have addressed the issue of noise generated by the boards. The feedback boards thus integrate space-qualified capacitors with very low thermal sensitivity that were designed and manufactured specifically for the purpose.

The eBOX is the responsibility of the Swiss Federal Institute of Technology (ETHZ), which also designed and built the data acquisition (AC) and power supply (DC) boards, in addition to the electronics controlling the temperature sensors. The feedback boards were designed by the various teams responsible for the seismic sensors. The boards that manage the VBB pendulums were developed in France by the Institut de Physique du Globe de Paris (IPGP) and built by EREMS in Toulouse, France. The SP seismometer control board was supplied by Great Britain, while the levelling mechanism control board was developed in Germany.