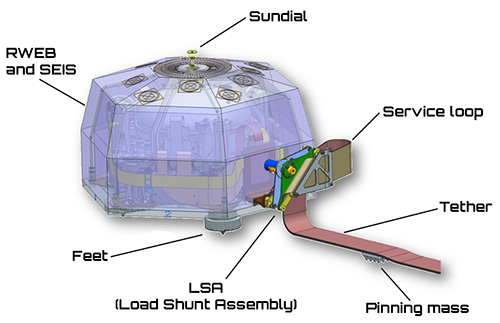 3D representation showing the SEIS seismometer and the end of the tether, with the service loop and the opening device (Load Shunt Assembly) (© NASA/JPL-Caltech).

Once on the ground, the SEIS seismometer will remain linked to the InSight lander through a sophisticated umbilical tether in the form of a semi-rigid flat cable.

This tether, housed in a tether storage box (TSB), will automatically unroll when the seismometer is grabbed by the robotic arm.

Three metres long and 4.5 cm wide, the cable links the SEIS instrument to the eBOX, an electronics unit placed in a thermally-controlled compartment inside the lander. This cable not only provides electrical power to the seismometer but also allows the passage of electrical signals, measurements obtained by the instrument, and command signals.

To avoid any vibrations transmitted through the tether from the lander (perhaps due to movement of the solar arrays when blown by the wind), damping devices have been installed.

One of the most important of these is a “relaxation” or “service” loop. A mechanical part attached to the seismometer forces the cable into a loop, which greatly reduces the potential propagation of waves from the spacecraft. This clever idea is commonly used on Earth when geophysicists deploy seismometers. Once the instrument is on the ground, it is generally recommended that the cable carrying power and data should be wound once around the seismometer’s protective cover. 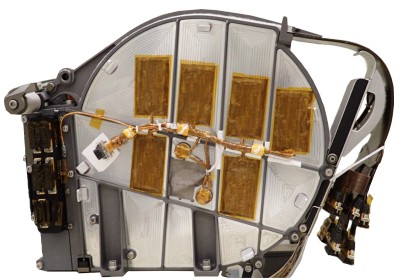 The spooling mechanism of the SEIS seismometer tether (© NASA/JPL-Caltech/Lockheed Martin).

Other subtle enhancements have gradually been added according to the project engineers’ inspiration. The tether, for instance, has been fitted with a small rod terminated by a small sphere allowing it to be grasped by the gripper at the end of the robotic arm. If the situation warrants it, it will therefore be possible to grab the cable on the ground and change its position.

A metal plate of roughly 300 g and fitted with prongs is also attached to the lower part of the cable; this tether prong mass will help to improve contact with the ground and prevent possible micro-movements.

The tether and its various accessories have all been developed by the Jet Propulsion Laboratory (JPL).