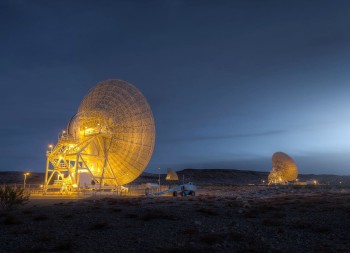 To guide InSight through the interplanetary space separating Earth from Mars, navigators analyse radio signals transmitted by the probe and received on Earth.

Three terrestrial receiving stations have been set up at strategic points of the globe, in Goldstone (California, United States), Canberra (Australia) and Madrid (Spain). The distribution of these stations ensures that at least one is facing Mars at any time. Radio communication between Earth and the InSight probe takes place in X-band, a very high frequency range around 10 GHz suitable for long-distance communication through space.

To check InSight’s trajectory, the navigators traditionally determine the distance between the probe and our planet by precisely measuring the time taken by the signals to reach the spacecraft then return to Earth. Given that the speed of light is 300,000 kilometres per second, the distance travelled can easily be calculated from the time taken for a return trip.

Measuring speed through the Doppler effect

A second useful technique is based on the Doppler effect, which can be used to determine the relative speed of the spacecraft with respect to Earth by calculating the frequency shift of radio signals transmitted by InSight.

A common example to describe the Doppler effect is that of a traveller sitting on a bench near the railway track at a train station. A train arrives from the left, whistling as it comes. Throughout the train’s approach, the frequency of the whistling noise rises, becoming more strident. Once the train has passed and is moving away from the traveller, the phenomenon is reversed: the frequency gradually lowers and the sound of the train is deeper. The same technique is used in space to measure the InSight probe’s speed in relation to Earth. 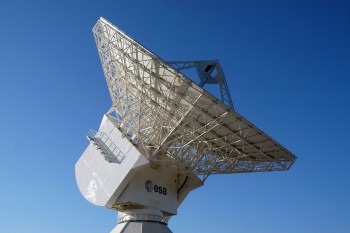 A third, more recent, technique has been developed to obtain information on the position of the spacecraft in directions that are not parallel but perpendicular to the Earth-spacecraft line of sight.

In this case, antennas on two sites belonging to NASA’s deep space network are pointed towards InSight. Once the receiving session is over, the same antennas are pointed at a celestial reference point with a precisely known position. Quasars—which are particularly powerful natural radio beacons—are the preferred targets.

Quasars are used to correct measurement imprecisions due, for example, to solar activity, ionospheric perturbations (the ionosphere being the layer of ionized air that surrounds Earth), or the tiny drift of clocks used on Earth. For a given measurement, the chosen quasar must be located in a region of the sky close to the area being crossed by the probe.

Guiding the probe to its point of entry

Using the three techniques mentioned above, interplanetary navigators can determine InSight’s position at any point in time with great accuracy and in three dimensions. They can also determine the direction it is moving in and the speed at which it is moving. If necessary, trajectory correction manoeuvres are carried out to refine the probe’s course and ensure it arrives at the Mars system with the right speed and at the correct angle.

Throughout the cruise phase, the mission’s interplanetary navigators regularly check the spacecraft’s position as it travels through space, immediately scrutinizing the slightest anomaly or deviation to determine the cause. The success of the critical landing phase, and therefore the success of the whole mission, depends on the exactitude of the trajectory.