Noise and sources of interference

External noise and sources of interference

The SEIS seismometer on the InSight probe is extremely sensitive. It is actually a thousand times more sensitive than those on the 1976 Viking probes, which means that it can register displacements of less than the width of a hydrogen atom. Such an amazing technical feat is essential since Mars is a lot quieter than our own planet. The greatest source of seismic interference on Earth is the crashing of ocean surf and pounding of waves on the shoreline. This generates such a continuous seismic noise that terrestrial seismic stations can detect storms in nearby oceans.

Of course, human activity also produces a great deal of noise contamination at the surface. It is not hard to imagine that the passing of an underground train or the battering of a jack-hammer can be picked up by a seismic station. Finally, the continual motion of Earth's atmosphere also leaves its mark. Wind and variations in temperature and pressure can seriously upset seismic measurements, which is why seismometers tend to be installed in mineshafts whenever possible.

With neither sprawling cities nor expanses of water in constant motion, the Red Planet is a very quiet world. However, the weather can affect seismic observations, just as it does on Earth, so it should be measured independently using a sophisticated weather station, and then decorrelated from the signals provided by the instrument. 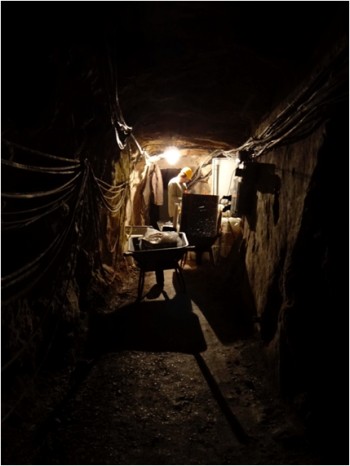 A SEIS qualification model was tested under the exceptional conditions afforded by the quietest seismic site in Europe, a former mine under the Black Forest in Germany (© rights reserved).

While it is obviously not possible to bury the SEIS seismometer under the Martian surface or place it in disused mine workings, project engineers have sought as far as possible to isolate the instrument from atmospheric disturbances. In the long-period domain, which is of particular scientific interest, atmospheric changes and fluctuations due to wind and pressure will be a major source of ground movement, independent of any seismic activity.

To overcome this kind of disturbance, the instrument is protected from the wind by a wind and thermal shield (WTS), but the protection is not absolutely perfect. In addition, buffeting due to the wind can be picked up by the seismometer through the ground.

Depending on the pressure, the layer of air around the landing site will tend to push on the ground, causing it to deform slightly; this movement will be registered by the seismometer.

The vibration of the lander's solar arrays—which are very thin and therefore tend to vibrate easily in the wind rather like the wings of an insect—will also be a source of noise interference, as will the soil being compacted under the three legs of the WTS.

As an additional precaution, pressure variations will be constantly monitored by an ultrasensitive barometer. However, when gusts exceed 3 to 3.5 m/s, the seismometer will start to pick up an appreciable noise level resulting from the deformation of the ground due to wind-generated pressure fluctuations. Although this noise will of course be an obstacle in detecting very small tremors, it will also be a new source of data for project seismologists and atmospheric specialists.

More than wind, temperature is the SEIS seismometer’s number one enemy on Mars. Temperature contrasts on the Red Planet are so great that it is absolutely essential that any change in the temperature of the pendulums be kept to a minimum. Despite the precautions taken, some components will always be sensitive to temperature, altering the centre of gravity or the stiffness of the springs and pivots.

To counteract temperature variations, the pendulums are placed inside a sphere under strict vacuum conditions. This sphere is then protected by multiple insulating barriers such as the RWEB (Remote Warm Enclosure Box) or the dome-shaped wind and thermal shield (WTS). The TCDM is a special device designed to minimize the pendulums’ sensitivity to changes in temperature.

Any changes in the outside temperature will be carefully monitored by the InSight lander’s weather station, as well as by temperature sensors inside the sphere, on the levelling system and inside the eBOX electronics unit. The data collected will then be used to correct as far as possible the long-period signals (collected mainly by the VBB seismometer) which are transmitted over very long periods.

The huge contrast in temperature between day and night (a night-time drop of around 60 to 80°C) will also generate indirect disturbances. The expansion and contraction of lander materials will furthermore give rise to cracking sounds, like those made by a house in winter when the temperature plummets and the roof beams shift.

Internal noise and sources of interference 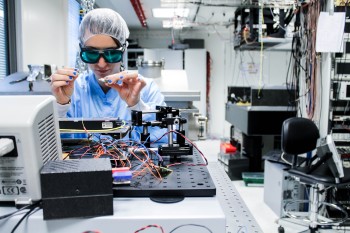 Internal noise in space instruments is measured in a controlled environment such as a cleanroom (© Lucile Fayon).There are celestial bodies in the solar system even quieter than Mars. The Moon, for example, has no oceans, atmosphere or noisy towns. Hardly anything has moved there for billions of years, and small tremors that would be totally inaudible on Earth can be heard and analysed. However, in an almost perfect silence, another source of noise more insidious than the external noise of oceans, the atmosphere or human activity, makes its presence felt.

If we were to take a terrestrial seismometer to the Moon and switch it on during the long lunar night when the temperature is very stable, not varying by more than a few thousandths of a degree Celsius, we would see on the recordings interference signals. On Earth, these would be completely drowned out by the planet’s background noise, but on the Moon they would be only too visible. So where does this parasitic noise come from?

A seismometer placed in an environment totally isolated from the slightest disturbance does not give a perfectly flat signal, but shows a subtle but nonetheless real activity; its origin lies in the heart of the instrument itself, generated through various phenomena such as thermal agitation, mechanical drift or electromagnetic interference.

If we observe an aqueous suspension of oil through a microscope, we might be surprised to see that the oil droplets that should be completely motionless are in fact vibrating and moving about randomly in all directions. This erratic motion, known as Brownian motion after its discoverer, the botanist Robert Brown, is due to the thermal agitation of the particles. Because of its immense sensitivity, the moving part of the pendulum in the SEIS seismometer is affected by thermal agitation, tending to oscillate randomly and independently of ground displacement; this occurs under the effect of impacts by the rare molecules of gas still present in the evacuated sphere.

Brownian motion can never be eliminated by isolating the seismometer from the external environment: the only way to reduce it is to build massive seismometers, reduce friction in the moving parts or lower the temperature. A similar form of Brownian noise also exists in the circuits of electronic boards, especially when high-value resistors are used. Thermal agitation combined with electronic thermal noise together constitute the main source of parasitic noise for seismic waves having periods of a few seconds; it is precisely these waves that are of most interest to scientists on account of their potential for discovery.

The SEIS seismometer will bathe on Mars in the electromagnetic field generated by the lander and the planet's ionosphere, that part of the upper atmosphere where certain atoms or molecules are ionized.

As we have seen previously, most of SEIS' sensitivity to the magnetic field comes from the springs on the VBB pendulums that are machined from an alloy of iron and nickel, compensating for temperature variations by altering their magnetic properties. The short-period (or “SP”) seismometer is constructed entirely from silicon, and is not sensitive to magnetic fields.

Again, just as for temperature, magnetic disturbances can be recorded independently using the Insight fluxgate magnetometer (IFG) and then subtracted from the seismometer signals.

Other internal sources of interference

Other sources of disturbance, such as electronic noise, can interfere with SEIS measurements. This type of noise is particularly found in the differential capacitive sensor (DCS), which measures the displacement of the moving part of the pendulum relative to the fixed part, but it also concerns the circuits in the feedback system and the analogue to digital converters to name but a few. Parasitic electrostatic forces may also reduce the instrument's sensitivity. Mechanical parts can drift, though this can be corrected by the feedback loop and compensated for by recentring the pendulums using the equilibrating mechanism.

The sources of internal noise in the SEIS seismometer are fairly well understood, and have been characterized by the engineers who developed the instrument.

The sources and intensity of internal noise have been predicted theoretically by analytical models and validated over several generations of seismometers. Although it is impossible to directly measure the noise levels of the seismometer pendulums, engineers were able to make an indirect (but accurate) estimate by comparing the measurements of terrestrial noise made by SEIS with data obtained at the same time by terrestrial seismometers in various observatories. Although more accurate, these are heavier and cannot be transported to Mars.