On its journey to Mars, InSight will be accompanied by a couple of very special "guardian angels", namely two fully-autonomous nanosatellites the size of a suitcase. Their role will be to relay back to Earth crucial information during the landing phase.

Autonomous satellites the size of a suitcase 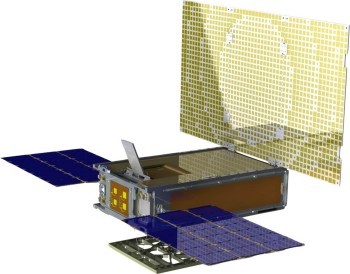 The Mars Cube One nanosatellite. This CubeSat satellite will act as a communications relay during the landing phase (© NASA/JPL).

The Mars Cube One (or "MarCO") nanosatellites, as they are called, are technology demonstrators meeting CubeSat standards. Their goal is to validate various systems that could play an essential part in the future of planetary exploration. Although nanosatellites (some built by universities) are becoming increasingly common around Earth, none has yet ventured into deep space.

The CubeSat nanosatellites are miniature satellites consisting of a variable number of units, each unit (U) being in the shape of a 10 cm cube. Each Mars Cube nanosatellite is assembled with 6 units (6U).

The two Mars Cube One satellites take up a relatively small volume: they are 36.6 cm long, 24.3 cm wide and 11.8 cm high, which is roughly the size of a small carry-on bag. They contain all the subsystems normally encountered in bigger satellites and are therefore fully autonomous. To prove it, each Mars Cube has two solar arrays, a cold gas propulsion system for trajectory corrections and changes in orientation, and solar sensors to find its bearings in space.

Designed as radio relays, they are also fitted with X-band communication antennas to both receive and transmit. The biggest is a rectangular unfurlable high-gain antenna whose design makes it fully comparable with the parabolic antennas ordinarily used on satellites. Medium- or low-gain antennas support the high-gain antenna. Finally, each MarCO also has a UHF antenna (for reception only) to listen to the UHF signals that will be sent from InSight during its descent onto Mars. A data rate of 8 kbps will be used for communications, whether between InSight and MarCO, or between the two MarCOs and the 70-metre antennas of NASA's terrestrial Deep Space Network (DSN). 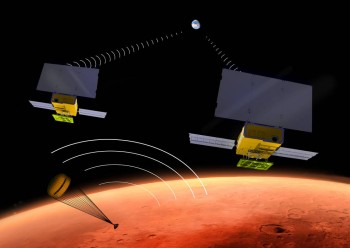 Artist's impression of the two Mars Cube nanosatellites in the process of relaying data during InSight's landing phase (© NASA/JPL).

Orbiting the planet since March 2006, the Mars Reconnaissance Orbiter (MRO) has been chosen to monitor InSight as it plunges towards the rusty-looking surface of the Red Planet in November 2018.

However, despite its power, the Mars Reconnaissance Orbiter was never designed to receive UHF data from InSight and simultaneously retransmit the same information back to Earth on another frequency (X-band).

Furthermore, the relative positions of Earth, Mars and the MRO mean that the orbiter can only relay recorded data back to the ground control centre several hours after InSight has landed. Finally, and unlike other probes, InSight lacks the ability to transmit information directly to Earth during its descent to Mars, hence the advantage inherent in the two MarCO nanosatellites which, being able to receive and transmit radio signals at the same time, offer controllers on Earth the chance of following InSight's spectacular arrival on the Elysium Planitia live.

The nanosatellites will be launched at the same time as InSight in May 2018. The launch vehicle used to inject InSight into its Mars trajectory is so powerful that it can easily fly an additional payload. During the launch, the two MarCOs are attached in special containers to the lower part of the Centaur upper stage, near the nozzle, while InSight is tucked under the fairing right at the top, at the opposite end of the Centaur stage. The MarCOs will be deployed after the start of the Contamination Collision Avoidance Manoeuvre (CCAM). This is to avoid the upper Centaur stage crashing into the planet with the concomitant risk of surface contamination. The first Mars Cube is deployed while the CCAM is still in progress. The Centaur stage then rotates 180° along its own axis, releases the second Mars Cube, and terminates the CCAM.

From then on, the two Mars Cube nanosatellites will fly autonomously in formation behind InSight. Fitted with their own propulsion systems, they can alter their course during their journey from Earth to Mars. Six months after the launch, they will have a front-row seat for InSight’s landing, enabling them to retransmit the probe’s progress in real time. Once the mission has been completed, the two Mars Cubes will fly past Mars to lose themselves in interplanetary space.