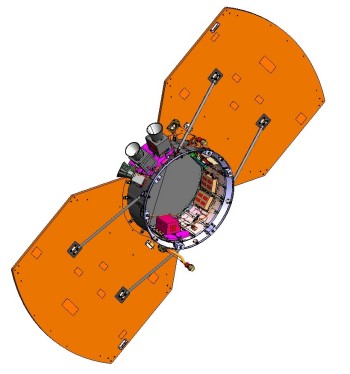 The InSight lander will travel to Mars as part of a spacecraft specially designed to journey through interplanetary space. This cruise stage, as it is known, is 2.64 metres in diameter and 1.76 metres tall. It has several features to increase its autonomy.

The cruise stage has its own rectangular solar arrays. Covering an area of 3.2 m², they provide the spacecraft’s power supply. They are small enough to be stowed as they are, without having to be unfurled after the launch, which removes the risk of problems on deployment.

Small thrusters are used to change the spacecraft’s orientation and trajectory, and stabilize the cruise stage in all three axes. Sun and star sensors enable the spacecraft to calculate its position, the stars playing the role of sextants. Several X-band telecom antennas are used to communicate with Earth.

The cruise stage is designed to transport InSight to Mars along a trajectory precisely calculated by interplanetary guidance systems. The cruise stage/InSight lander assembly will take six months to complete its journey.

It is only once in the vicinity of Mars that the cruise stage, having fulfilled its mission, will separate from its passenger to plunge into the unfathomable depths of space, where it will constantly revolve around the Sun, a forthwith silent testimony to human ingenuity.