A brief history of seismology

While the SEIS instrument is a technological marvel, as indeed is the InSight spacecraft that is going to place it on the Martian soil, the data that scientists hope to obtain on the planet’s interior structures are likely to be very different from those that geophysicists daily collect on Earth. 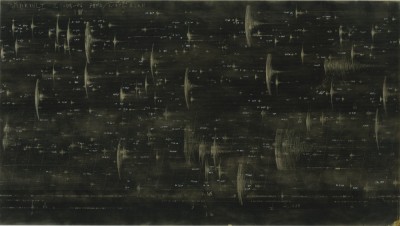 The inner depths of Mars are as yet completely unknown, despite the armada of robotic explorers that have been sent there over the past 50 years. Seismology has been somewhat neglected by previous Martian missions—unlike lunar missions—having focused from the start on the search for life and habitability. The only seismometer that actually worked on the Red Planet, flown on the Viking 2 lander, was sent 40 years ago, and did not provide any clear results. This explains why, although the surface of Mars is becoming increasingly well-known and characterized from a topographical, geological and climatic point of view, we know practically nothing about the planet’s internal structure.

The InSight mission finds itself in the paradoxical situation whereby an ultra-sophisticated robot bristling with sensors is designed to carry out scientific experiments that were completed on Earth between the end of the 19th and the first quarter of the 20th century.

In ancient times, earthquakes were thought to be due to winds imprisoned inside the Earth and trying desperately to escape by furiously whipping through an interior maze. This “pneumatic” theory gave way to a theory based on the sudden, violent emissions of steam caused by the heating of pockets of water by heat deep within the planet.

Fiery tempests, underground fires and telluric explosions caused by the combustion of sulphurous or bituminous substances were next evoked during the Renaissance period. This was an attractive idea because it could be related to volcanoes, which were then considered as the planet’s safety valves. In the 18th century, electricity—which revolutionized everyday life—was briefly accused of the tremors shaking the Earth due to the building up of an electrical charge in underground cavities.

It was only in the 19th century that tectonics were first mentioned, bringing a definitive answer to scientists’ questions. Earthquakes are caused by the violent rupture of rocky masses deep below the surface that are subjected to strong mechanical stresses. When they break, this rocky material releases seismic waves that move through the rock at the speed of sound, typically several kilometres per second and up to several dozen kilometres per second deep within the planet. These waves spread not only through the interior structure of the planet, but also on its surface. The latter are the ones mostly to blame for the huge damage caused in inhabited areas.

His seismoscope, a metal urn (not unexpectedly decorated with dragons), could only indicate the direction in which an earthquake had occurred, but it testified to the intuition and ingenuity of its inventor, and enabled emergency rescue teams to know where to head after a violent quake.

The first real seismograph as such, capable of recording the occurrence of seismic waves as a seismogram, was developed by the Italian Nicola Zupo in 1784. He used a vertical pendulum composed of a spherical lead weight to which a needle was attached. The needle recorded displacements of the mobile mass in ash when an earthquake occurred.

From that point on, through the 19th and 20th century, numerous seismometer models were developed and numerous innovations made, including recording quakes by plotting displacements on a roll of paper wrapped around a drum, studying ground motion with horizontal pendulums rather than remaining limited to the vertical axis, and using inverted pendulums to improve sensitivity.

All these instruments use a mass held by a spring or similar device that moves when there is a tremor. Its own motion is interpreted to deduce that of the ground. This basic principle is still used by the InSight probe’s seismometer, but its numerous refinements have led to a sensitivity way beyond that of its honourable ancestors.

First recording of a quake 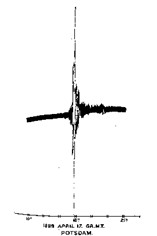 First recording of an earthquake by Ernst von Rebeur-Pacshwitz on 17 April 1889 (© rights reserved).

The first recording of an earthquake took place on 17 April 1889 at Postdam, Germany, when Ernst von Rebeur-Pacshwitz’s seismograph measured significant tremors in the ground that he attributed to a strong earthquake in Tokyo, a city some 9,000 kilometres away as the crow flies. By comparing the signals recorded simultaneously at Wilhelmshaven, the scientist estimated for the first time that seismic waves travel at a speed of around 7 km/s.

In 1897, British geologist Richard Dixon Oldham managed to characterize seismic wave trains. He defined P-waves (primary waves) that arrive first, S-waves (secondary waves) that follow, and finally surface waves that differ from the first two because, as their name suggests, unlike the first two types they do not travel deep within the Earth.

In 1906, by analysing the propagation time of seismic waves generated by numerous earthquakes, Oldham concluded that the Earth had a core less than 0.4 times that of its diameter, i.e. around 5,100 kilometres (the Earth’s metallic core has since been found to have a diameter of 6,960 kilometres).

This was the first time in history that seismic waves were used to sound the Earth’s inner structure. Indeed, seismology has two complementary focuses: the study of quakes as such (position and magnitude), and the exploitation of seismic waves to investigate the inner depths of a planet or even a star, which are completely inaccessible by any other means. In 1906, the Earth’s core was thus identified but doubts remained as to its exact size and nothing was known about its composition.

In 1909, Croatian meteorologist then seismologist Andrija Mohorovicic identified a sudden acceleration in P-waves when studying the seismographs of an earthquake that occurred in Zagreb. He put this down to a discontinuity in the upper part of the Earth. 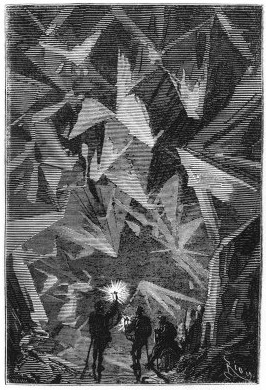 Journey to the centre of the Earth (© rights reserved).

This discontinuity, called the “Moho” in his honour, is a boundary around 35 kilometres deep on average (5 to 10 km under the oceans and 20 to 90 km under the continents) that marks the borderline between two major components enveloping our planet: the Earth’s crust, and its underlying mantle.

The Moho is the shallowest physical discontinuity of our planet that we know. However, despite several attempts to drill down to it through either land or sea, nobody has ever reached it directly, and only seismic waves have allowed us to “touch” it indirectly. So much, then, for the dreamers hoping to travel down through the Earth’s mantle or core. Despite the romance of novels like Journey to the centre of the Earth, or Hollywood films such as The Core, seismology is our only way of exploring the Earth’s innermost depths!

The Earth’s core once again became the subject of immense interest when German geophysicist Beno Gutenberg used seismic waves to reveal another discontinuity, this time between the bottom of the Earth’s mantle and its core. The “Gutenberg discontinuity”, as it is still called today, is located 2,900 kilometres below the surface and accurately delimits the volume occupied by the Earth’s core.

The interface between the Earth’s mantle and its core plays a critical role in our planet’s geological dynamics because it is from here that mantle plumes begin their journey to the surface. It is when they manage to reach it that they produce huge volcanic eruptions, along with other associated geological events.

In 1926, when investigating not earthquakes but tides due to the Moon’s gravitational attraction on the seas and oceans, British geophysicist Harold Jeffreys put forward the idea that the Earth’s core was only relatively solid and could even be liquid!

Finally, the last major discovery on the Earth’s interior structure was made in 1936 and concerns the Earth’s metallic core. Danish seismologist Inge Lehmann revealed from her study of seismographs the existence of a solid inner core separate from the outer liquid core by a discontinuity that was named after her.

As far as our own planet is concerned, seismology has cleared up the major mysteries, so it can now turn to Mars to make history all over again.

Some of InSight’s major goals are to measure the thickness of the Martian crust and determine any stratification (multiple layers of different densities), characterize the mantle’s mineralogical composition, accurately determine the core’s radius and establish whether it is liquid, solid or a combination of the two states. As you can see, this corresponds to the key discoveries about Earth’s interior structure that we have just briefly reviewed. Again, seismic disturbances and tidal forces will be used to unveil the mysteries that the pioneers of seismology have already pierced on Earth.

InSight’s contributions to knowledge will therefore be a truly historic event for geophysics.

There are numerous hurdles to overcome to repeat on Mars what geophysicists managed to do in the 20th century on Earth, and they have constantly challenged the ingenuity of SEIS instrument team members. 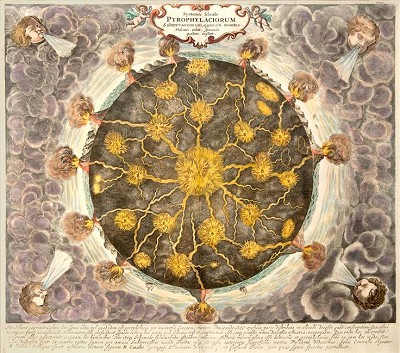 In the 17th century, scholars thought that the Earth was hollow and contained many fiery hot spots. These were thought to lead to numerous volcanoes all over the world. One of the best representations of these telluric infernos is Athanasius Kircher’s Pyrophylaciorum (© rights reserved).

SEIS is the only seismometer to be flown on InSight, so it will have to operate alone on Mars, whereas seismologists on Earth were quickly able to benefit from networks that have never ceased to grow, starting with several dozen, then several hundred, and now several thousand seismic stations.

Today, Earth is being constantly monitored by over 20,000 seismometers deployed throughout the world, most of which transmit data in real time. As early as the late 19th century, Rebeur Paschwitz had understood the fundamental advantage of being able to study an earthquake from several points on the globe.

Progress in signal processing and some clever tricks based partly on the fact that Mars is quite small, will nonetheless enable SEIS to take measurements that even recently were considered impossible.

Another astonishing feature of SEIS is that not only has the instrument been designed to be very sensitive but it is also extremely robust.

The space environment being what it is, the InSight seismometer must be ultra-resistant so as to withstand the extreme conditions to which it will be subjected: vibrations and shocks during the launch and landing phase, the space vacuum, glacial or extremely high temperatures, and the harmful radiation to which it is exposed on its journey to Mars to name but a few.

The phenomenal bangs and bumps that the probe will go through on lift-off from Earth and landing on Mars appear to totally contradict sensitivity requirements which are even more stringent in the case of a planet with little seismic activity, which may be the case for Mars.

Yet engineers have successfully met most of the challenges and will deliver to NASA in mid-2017 a technological gem that should revolutionize our knowledge of the inner depths of the Red Planet while writing a new chapter in the history of seismology.