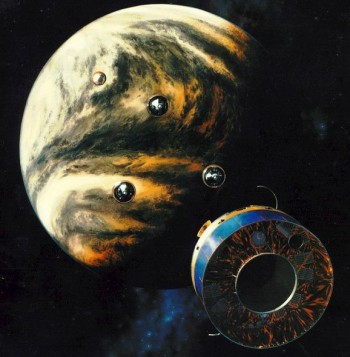 Initially put forward by the Ames Research Center (commonly known as NASA Ames), the scientific objectives of this ambitious project, costing between 750 million and 1 billion dollars, were many and varied: atmospheric research, geological investigations, and the search for signs of life. It was well received by the scientific community, who saw it as a unique opportunity to continue their study of Mars after the Viking probes in 1976.

MESUR involved the deployment of multiple science stations (16 were originally planned) at numerous points on the surface of the Red Planet, including the poles. These would have formed an observational network encompassing the planet. Disciplines such as meteorology or seismology that require the acquisition of data from multiple locations would have been undertaken under ideal conditions. By its very nature, a network can tolerate the loss of an element, which is a sizeable advantage in a domain as risky as that of space exploration.

The probes involved in the MESUR project were broadly disc-shaped. With a mass of roughly 160 kg, they were fitted with airbags to cushion their impact with the Martian surface during the final landing phase. Bristling with numerous instruments, they were all designed on the same model. They carried sensors to study the structure of the atmosphere as the stations plunged towards the ground, a weather station, a descent and/or surface camera, a spectrometer to analyse the elemental composition of the rocks and soil, a three-axis seismometer and an analyser for volatile material. They would have been powered by the decay of radioactive elements.

Among the key instruments of the MESUR stations was a seismometer that absolutely had to be deployed on the ground in such a way as to be isolated from the inevitable vibrations of the lander (a requirement not met during the Viking mission, with unfortunate consequences: often buffeted by wind on the lander platform, Viking 2's seismometer failed to send back any usable data).

Engineers then applied themselves to studying possible mechanisms for deploying the seismometer: ejection by a spring or placement using an arm or flexible mast, for instance. However, none of the solutions envisaged was adopted by the designers, mainly because they were too rough for the sensitive instrument to be deployed. The very relative agility of the arms on the Viking landers (the solution adopted by the InSight mission) militated against this device at the time. Attention then turned to an attractive alternative, namely a microrover.

At that time another NASA centre—the Jet Propulsion Laboratory—was very interested in the potential of mobile robots or “rovers” for exploring the planet Mars. The immobile nature of the MESUR science stations seemed inconsistent with the characteristics of such vehicles. In view of the small size of the envisaged stations, if mobile robots were to be carried on board they would also have to be small, whereas the rovers envisaged were heavy and bulky. Nevertheless, some engineers at JPL separately started to consider the possibility of developing a microrover.

A mission as ambitious as it was complex 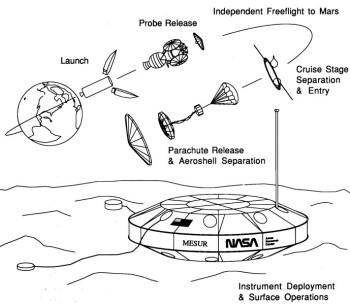 To reach its final size, the MESUR network had to rely on several launches, each spaced two years apart (consistent with the constraints of celestial mechanics). Spreading the launches out over time also allowed costs to be reduced.

The first stations therefore had to have a long life so that they would still be operating when the last stations became active. They had to have a lifetime of at least 8 years: 6 years waiting and 2 additional years for data acquisition with a network operating at full capacity.

It was then necessary to determine the landing sites. The stations focused on the weather would have to be distributed all around Mars, from the equator to the poles through the middle latitudes, while the seismic stations were to be placed in a triad formation.

Despite that, not all the scientists were happy with the choice of sites, geologists' requirements being different from those of meteorologists, geophysicists and exobiologists.

Finally, there was no probe orbiting Mars at that time and capable of relaying data back to Earth, and the issue of getting scientific data back to Earth posed a major problem for the project designers. To address the lack of communications infrastructures in orbit around Mars, a telecoms orbiter was then added to the mission, significantly increasing its cost.

The birth of Pathfinder and the end of MESUR

The increasing complexity of the project and budgetary constraints led to a drastic revision of the MESUR project’s initial ambitions. Contrary to the initial schedule, the 1996 launch window was assigned to a technology demonstrator known as SLIM (Surface Lander Investigation of Mars). This single station was intended to demonstrate the technological merits of MESUR and convince the political powers that be of the project's merit.

Those scientists who were counting on a network to allow them to study Mars in its globality did not hide their disappointment at this solitary station that left practically no room for measuring instruments. To save the project, JPL—which supported a mobile solution for exploring Mars—promoted the idea of using a microrover to deploy instruments such as a seismometer or X-ray spectrometer to collect chemical information about the Martian rocks. The objective was also to rekindle public interest in the mission, since the general public was still hungry for technological novelty.

Initially run by NASA Ames, responsibility for the MESUR project was then shifted to JPL. At that stage it still involved deploying a network of 16 stations around Mars, making use of the launch windows in 1998/1999 (4 stations), 2001 (4 stations and a telecoms orbiter) and 2003 (the last 8 stations using 2 launchers). 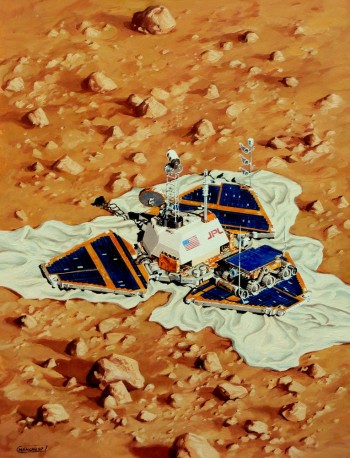 Artist's impression of the Pathfinder probe and the Sojourner microrover (© Manchu/Ciel & Espace).

The SLIM demonstrator was also a good opportunity for JPL to test a new mission concept then being studied, called Discovery.

Less expensive, carried out within a tight schedule and oriented towards a precise theme, these projects presented an alternative to the extremely complex and costly missions to explore the solar system that were NASA's daily bread.

The SLIM demonstrator, whose lift-off was still slated for 1996, was then renamed MESUR Pathfinder. The seismometer was removed from the mission on cost grounds. Even though offered free of charge by another country, integrating it in the lander would nevertheless have increased the costs. Since its priority was deemed less than either the microrover or the camera, it was cancelled.

By that stage, Pathfinder was drifting further and further way from MESUR. Compared with the initial stations, its life was no more than 30 days (as against several Martian years of operation), solar arrays had replaced the nuclear-powered generator, the number of scientific instruments continued to fall, and the probe no longer looked like a hollow saucer, but a tetrahedral. Only the idea of landing using airbags had been kept. Compared to the ambitious Viking mission in the 1970s, the whole thing was pretty paltry and only the Sojourner microrover seemed to be of any real interest.

MESUR was finally abandoned for budgetary reasons. After the dramatic loss of the Mars Observer probe in 1993, NASA was no longer willing to invest in missions costing over a billion dollars. The mission proposed by JPL was no longer a technology demonstrator for the MESUR project, but was transformed into a mission that would usher in the era of "faster, better, cheaper", and which would initiate the Discovery programme to which InSight now belongs.

On the 4th of July 1997, 20 years after Viking, Pathfinder landed on the rust-red surface of Mars. For NASA, this was a triumphant return to the Red Planet. The mission was not only a technical success, validating the airbag system, but was very popular with the media. The meanderings of the Sojourner robot were followed on the Internet every day by millions, fascinated by the adventures of the little explorer as well as by the magnificent colour images of the Martian landscapes in Ares Vallis.

However, this should not distract us from the fact that the initial objective of the small Pathfinder station was to put a seismometer on Mars. For geophysicists, MESUR's demise was a great disappointment; however, these same geophysicists did not yet know that the road to Mars would be even longer than expected...