NetLander, the first real attempt to deploy a network of seismometers on Mars 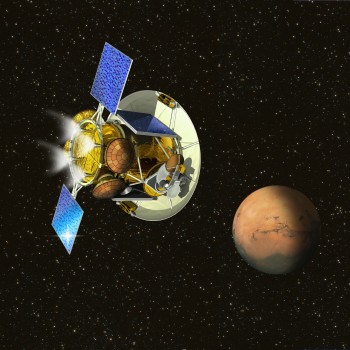 Artist’s view of the Mars Premier Orbiter carrying the Netlander modules. This Franco-American mission aimed to return Martian soil samples to Earth (© CNES/David Ducros).The aim of the international NetLander project was to deploy a network of 4 identical stations on Mars. Each small station was equipped with a suite of measuring instruments, including 2 seismometers.

Developed in the late 1990s, the NetLander mission was characterized by a strong international contribution, since it involved not just France but also the United States, Finland, Germany, Belgium, Italy, the United Kingdom and Switzerland. The NetLander stations would leave for Mars on an Ariane 5 launch vehicle, under the umbrella of a vast Franco-American programme to return samples from the planet, initiated just after the announcement of the potential discovery of fossilized microorganisms in Martian meteorite ALH84001.

The sample return mission required two landers to be sent to Mars in 2003 and 2005, each equipped with a rover and a rocket-like Mars Ascent Vehicle (MAV). After having taken several soil, rock and atmospheric samples, the rovers would place their precious harvest on board the MAV, which would then boost the sample canisters into orbit around Mars.

In 2005, an Ariane 5 launch vehicle was planned to launch an orbiter and lander. After having been placed in orbit around the Red Planet using a novel but risky aerocapture technique, the main objective of the orbiter was to recover the sample canisters and bring them back to Earth in a return module. Its secondary mission was to deploy the NetLander capsules, which did not have their own means of transport to Mars. 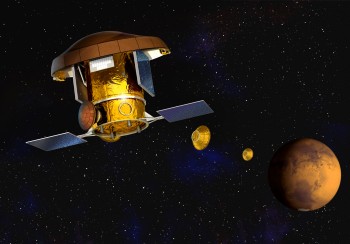 The mission that we have briefly described to return samples from Mars was very ambitious, and technical difficulties threatening the project became apparent from the very start. In 1999, NASA's loss in quick succession of Mars Climate Orbiter, followed three months later by Mars Polar Lander, a prototype of the spacecraft intended to return the samples, put an end to the project.

Without the support of NASA, the French space agency—CNES—decided that just sending the orbiter to release the NetLanders and test the aerocapture technique was financially unrealistic, not to mention growing political tensions with the United States.

As a consequence, the NetLander project, which had already entered phase B, was shelved in the early 2000s, dashing all hopes of being able to finally place seismometers on Mars.

Transported to Mars as passengers on board the French sample return orbiter, the NetLanders shared many features with the disc-shaped MESUR modules, which is hardly surprising given that both missions had the same objective, i.e. landing a network of geophysical observatories on the Red Planet. The NetLanders had a thermal shield to allow them to survive the journey through the atmosphere as well a parachute to slow the package down sufficiently to survive the impact with the Martian surface. Two airbags would cushion the final shock and, after having bounced several times, the 47 cm diameter capsules would finally came to rest before opening like a flower. The stations would be powered by solar arrays and have communications antennas.

From an instrument point of view, the capsules were particularly well equipped: each one carried a mast fitted with a camera, a complete weather station and a geophysical package comprising two seismometers, a magnetometer, a radar set, an electric field sensor and temperature probes. The telecoms system was installed to make geodesic measurements, and there was also an onboard microphone provided by the Planetary Society for a teaching initiative.

One of the main objectives of the NetLander mission was to determine the internal structure of Mars. To this end, the 4 stations would be directed to precise points on the Martian surface to establish a sensory network to triangulate any quakes. Three stations would be deployed roughly 1,000 km apart in a triangular configuration, with the fourth being sent to the antipodes. 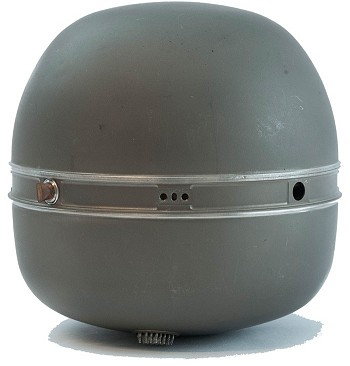 The sphere of the SEISM seismometer for the NetLander mission. Click to see inside (© Hervé Piraud/IPGP).

The identical stations were fitted with two seismometers, one sensitive to short-period seismic signals (100 mHz to 50 Hz), the other able to measure long-period signals (10 mHz to 10 Hz), with a very-long-period output for measuring tides. It is this feature that is of particular interest here, given that SEIS, the InSight seismometer, has inherited its characteristics.

Known as SEISM, this seismometer only covered 2 Very Broad Band axes (one horizontal, one vertical) placed head to toe, while SEIS has three. The missing broad band axis was replaced by one of the short-period seismometer axes, enabling it to locate tremors in 3 dimensions.

The pendulums were enclosed in an evacuated sphere 18 cm in diameter which provided some protection against the particularly large temperature variations that occur on the surface of Mars. Temperature, pressure and inclination sensors were included in the package.

The sensitivity of the SEISM pendulums was already high and comparable to InSight, but the conditions of installation would have lowered the precision compared to InSight. The NetLanders had no deployment mechanism capable of placing the seismometer on the surface of Mars, and it was therefore deployed on the ground via 3 apertures in the floor of the probe, through which the legs could descend. The instrument would then be detached from the structure of the lander capsule. If this sophisticated system were to fail, the seismometer would then have been compelled to function as and where it was—i.e. inside the lander capsule—which would have been unsatisfactory due to ineffective contact with the ground (the famous coupling by which geophysicists set so much store).

SEISM was supported in its mission by a miniaturized short-period 3-axis seismometer. Etched in a silicon wafer, this microseismometer was sensitive to ground motion characterized by fairly high frequencies (0.1 Hz to 100 Hz). This frequency band is not optimal for surface waves generated by distant quakes, but it is for regional and local seismic activity.