The future of Martian seismology 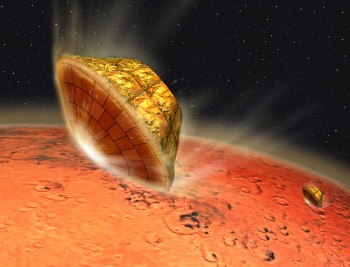 Artist’s view of the NetLander capsules’ atmospheric entry (© CNES/David Ducros). The InSight mission’s objective is to place a seismometer on Mars. Although instrument deployment, a key factor in acquiring high-quality data, has been the object of much attention, from the IDA robotic arm first placing SEIS on the ground to its horizontal alignment via a motorized levelling system, then the positioning of its Wind and Thermal Shield (WTS), the fact is that SEIS is still going to have to operate alone, which is not the best situation for a seismometer.

Forty years ago, when scientists attempted through the Viking mission to probe the depths of the Red Planet, there were already two seismometers involved. Similarly, a couple of instruments were flown aboard the automated capsules of Russia’s Mars 96 mission, which unfortunately never managed to break free of its Earth orbit.

In seismology, two is always better than one, but the principal objective of geophysicists is clear when you look at the projects that they have dreamed of and worked on: the NetLander mission, for example, was to have deployed four seismic stations, while the ambitious MESUR project planned to jettison no fewer than 16 seismometers over the surface of the Red Planet, without counting the four additional stations that could have been brought by Europe. 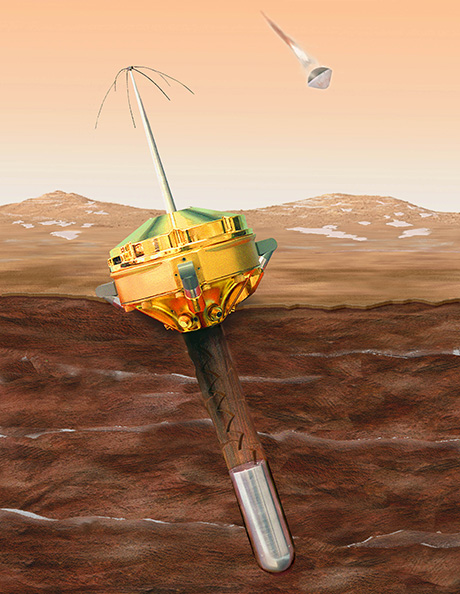 Geophysicists are obviously seeking to contain the Martian globe within a tightly-meshed network of seismic stations disseminated all over the planet in order to establish on Mars a far more modest version of the global seismic network on Earth, currently made up of several tens of thousands of stations.

Up to now, projects involving the deployment of a network of seismometers on other planets have all been shelved at different times, mainly for budgetary reasons, but also because, as far as Mars is concerned, geophysical investigations have not been given the priority that geophysicists would like. They have been crowded out by exobiology activities seeking traces of past or current life. The main motivation in exploring Mars is the persistent quest to shed light on the origins of life.

A huge challenge therefore awaits the InSight mission: not only will it take the first real seismic measurements on Mars, but it will also explore the planet’s inner depths, from crust to core. This is a crucial step to understanding the origin and evolution of rocky planets in our solar system, and for this reason merits as much respect as other areas of research.

Despite the numerous techniques that geophysicists are going to use to fully benefit from InSight’s only seismometer, SEIS will inevitably be faced with certain limitations. This is why scientists and engineers continue to study projects involving the deployment of not one but multiple seismometers on Mars. InSight is paving the way, and marks the beginning of renewed interest in the geophysical aspects of the Red Planet. In 2021, a second seismic station— this time flown on Russia’s ExoMARS 2020 lander—will accompany InSight’s SEIS instrument, even if its installation will not necessarily be so optimal. More than ever before, the future of Martian seismology lies in networking. 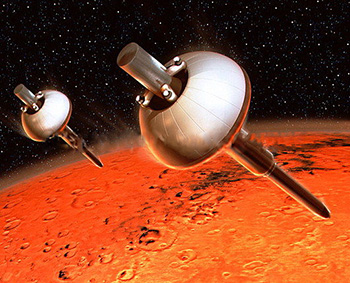 In past network-based projects, the seismometers were generally designed to be deployed on the ground using small capsules, which could also include other geophysical instruments as well as the indispensable weather station. In fact, the airbag-cushioned tetrahedral platform that landed the small Sojourner rover on Mars in July 1997 was originally designed to disseminate seismometers as part of the MESUR mission. Although autonomous in terms of power supply and telecommunications, these ground stations are not the ideal way of positioning a seismometer on the Martian surface.

Therefore, geophysicists have started investigating another way of deploying seismometers, that is to say using penetrators. A penetrator is a kind of sophisticated dart, generally bristling with miniaturized instruments and jettisoned by a mother ship orbiting the planet. The aim is for these penetrators to pierce the rocky surface of a planet and become firmly stuck in the soil. 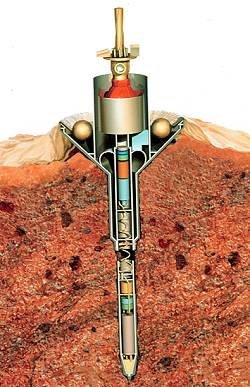 Cut-away view of the Mars 96 penetrator in the Martian soil (© David Ducros).

Russia’s Mars 96 mission was flying not only the capsules already mentioned, but also two penetrators. In addition to the different instruments chosen to study the soil’s mechanical, magnetic and chemical properties, these penetrators each contained a short-period seismometer. Sad to say, these also never managed to escape from Earth orbit and ended up, like the rest of the mission, in the Pacific Ocean.

In 1998, NASA also launched two penetrators aiming for Mars. Called Deep Space 2, they were carried on board Mars Polar Lander, designed to reach Mars’s South Pole in order to conduct various investigations. The Deep Space 2 penetrators did not include any seismometers, but served mainly as technology demonstrators to validate this novel method of piercing the Martian surface at speed rather than gently floating down onto it.

Unfortunately, the two Deep Space 2 penetrators—along with their host, Mars Polar Lander—disappeared without a trace on 3 December 1999 during landing. No sign of any of them has ever been found on the surface of Mars, and we still do not know to this day what stopped them in their tracks.

Despite the failure of these first attempts, penetrators remain particularly promising for geophysical exploration of the Red Planet. These probes are generally designed in the same way: they contain two parts, joined by a flexible connecting cable.

Upon hitting the ground, the upper part (which is wider) remains upon the surface, while the lower part (which is narrower and pointed) splits apart to drive down into the subsoil, trailing behind it the connecting cable. The upper part has a radio antenna for communication purposes. The power is provided either by a battery or, even better, a radioisotope thermoelectric generator, which generates electricity from the heat released when a small amount of radioactive material decays.

It is very likely that the first geophysical network mission to Mars uses neither capsules nor mini-landers, but penetrators containing ultra-sensitive broad band miniature seismometers. Fitted securely in the lower part of the penetrator, they will benefit from excellent coupling with the ground and be relatively well protected against perturbing elements on Mars, especially the atmosphere. If the penetrator manages to drive down deep enough, they could also be sheltered from the huge temperature variations on the surface that greatly complicate the collection of long-period seismic signals.

Another line of research for planetary geophysicists concerns improving the sensitivity of seismometers while miniaturizing them (i.e. reducing their size, mass and power consumption). The InSight probe’s seismometer, SEIS, is already incredibly sensitive: it can measure ground displacements smaller than a hydrogen atom !

Although it is the stuff of which dreams are made, this technological feat is just the first step on geophysicists’ roadmap. In their laboratories, they are already investigating instrument concepts and prototypes that will be even more sensitive. Unlike SEIS, which uses electrodes to measure the displacement of the moving part of the pendulum, these new-generation seismometers will use optical interferometry sensors similar to those developed for the Earth-based Virgo instrument or the eLISA space mission. 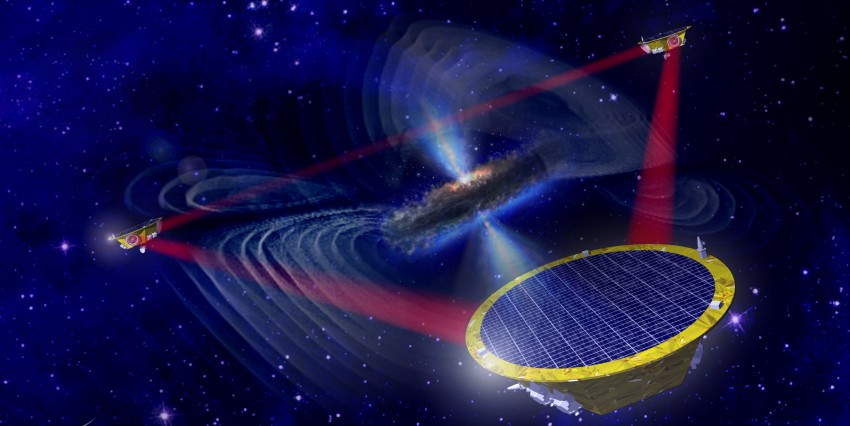 The three probes of the eLISA space mission (© ESA).

Scheduled for 2030-2040, the eLISA mission entails deploying in space a gigantic optical interferometer using a constellation of three satellites connected by a laser beam.

Located one million kilometres from each other, the satellites will each form the apex of a triangle whose sides will be symbolized by the laser beams, used to constantly check the distance between the three satellites with an incredible precision.

The goal of this huge assembly is to trap gravitational waves. When the wrinkles that deform the fabric of space reach eLISA, they will displace—albeit on an infinitesimal scale—the satellites. As the latter are constantly checking their position relative to each other, this change in distance induced by the rippling wave, however small, will nevertheless be detected and measured.

To test and validate the technologies needed for eLISA, the European Space Agency initiated the LISA Pathfinder mission.

This successful proof-of-concept mission, which took place from December 2015 to July 2017, contained two metal cubes (known as “test masses”) floating freely in a chamber with no contact with the rest of the satellite. The cubes’ relative positions were constantly measured by a laser interferometer. Like a buoy buffeted by tidal motion, the two cubes oscillated under the effect of gravitational waves. However, in order for such small displacements to be detected, all possible sources of perturbation had to be correctly cancelled out or counteracted. 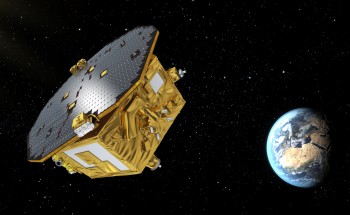 Successfully launched on 3 December 2015, LISA Pathfinder was sent to Lagrange Point L1, an area of space 1.5 million kilometres from Earth, where the gravitational influences of the Sun and the Earth cancel each other out. The tranquillity reigning there is a clear advantage for the measurements undertaken by LISA Pathfinder, but it is not sufficient in itself because other forces come into play.

One of these is solar pressure, which acts upon spacecraft, affecting their movement. To counteract the pushing force of solar photons, LISA Pathfinder was fitted with a micro-propulsion system of ion thrusters to keep the satellite’s position stable (within a matter of nanometres).

Finally, the satellite itself disturbs the cubes in magnetic, electrical or gravitational terms. Everything that could possibly be done was done to minimize or cancel out these internal forces so that the displacement of the test masses reflected only the passing of gravitational waves and nothing else. The laser interferometer monitoring the cubes thus had to be able to detect extremely small movements in the order of a picometre (i.e. one trillionth of a metre).

All the technologies needed for LISA Pathfinder’s optical interferometry sensors are of great interest to planetary geophysicists, because a seismometer capable of following the displacements of the moving part (i.e. the test mass) using interferometry would raise the performance above that of current instruments.

To follow ground motion, the SEIS seismometer aboard InSight uses an electronic sensor that measures the electrical capacitance between two pairs of electrodes, one on the fixed part and the other on the moving part. The sensitivity offered by such a device already enables us to measure long-period movements of around one angstrom, i.e. 0.1 nanometres.

Using an optical sensor, measurements would be one hundred times more precise, thus opening up entirely new prospects in the area of planetary geophysics.

In December 1972, the Apollo 17 mission had in fact attempted to detect such waves through a gravimeter, but the technology available then was not up to taking the desired measurements. Gravitational waves were finally detected 40 years later, in February 2016, by two Earth-based observatories.