A six-month journey to Mars 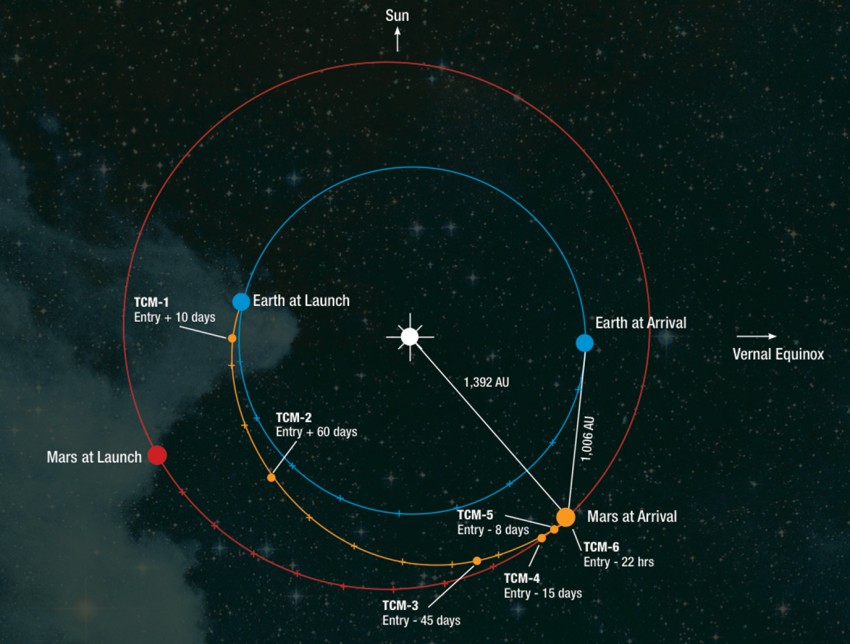 Once launched, InSight will take six and a half months travelling through interplanetary space to reach its target, the Red Planet. Its trajectory is a circular arc with one end on the Earth and the other on Mars. This transfer orbit is known as a Type I orbit, because its journey around the Sun remains below 180°, explaining a relatively short transit time. 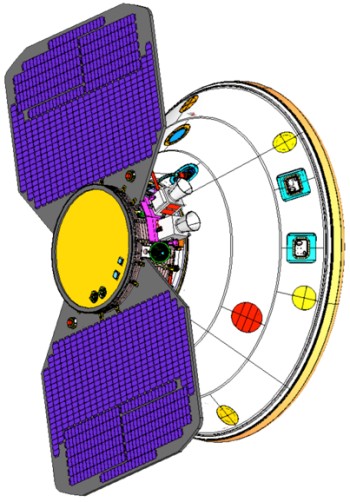 Contrary to what you might think, the launch vehicle used for InSight is not directed towards Mars but along a different trajectory. The rules of planetary protection, which stipulate that every precaution must be taken to avoid contaminating Mars with germs from Earth, have a surprising consequence. Automated spacecraft heading for Mars are actually launched so that they will miss their target. This procedure is designed so that the upper stage of the launcher, which trails behind the probes, will not crash into the Red Planet.

As InSight is not launched directly towards Mars, corrective manoeuvres are scheduled throughout its journey to eliminate the drift that is deliberately introduced at the beginning, thus bringing the probe back on track.

There are six Trajectory Correction Manoeuvres (TCMs) in all. The first takes place quite soon after launch and eliminates most of the deviation while correcting any injection errors. The second is scheduled halfway through the journey; all the others then take place during the approach phase, which starts 60 days before landing. They aim to refine InSight’s trajectory so that the spacecraft enters the Martian atmosphere with the desired precision. The atmospheric entry path angle is only -12,5°. If the probe penetrates the atmosphere with a shallower angle, it will bounce off and be lost in space. If, on the other hand, the angle is steeper, there will be so much friction that the lander will be incinerated. Great precision is also necessary to be able to land exactly on or very near the equatorial landing site, Elysium Planitia.

Besides the TCMs required to get the spacecraft to its entry point into the Mars system, the cruise phase is quite a calm period of the mission.

Engineers check the probe’s instruments and various subsystems on many occasions, while interplanetary navigators keep a close eye on the trajectory. During the cruise phase, only the seismometer’s horizontal SP sensor can work and therefore be tested. The VBB sensors and vertical SP sensor will be saturated due to the zero gravity.

On Earth, while InSight is travelling through the dark realms of space, the various mission teams continue to work hard to guarantee the mission’s success and prepare for both the landing and the scientific measurements to be initiated once the lander has arrived safe and sound on Mars.