Seismometers are very sensitive to the slightest variation in temperature. On Earth, they are generally installed in environments where the temperature is very stable, such as in caves or mineshafts. It is impossible on Mars to dig a hole, and the instrument will therefore be subjected to particularly wide daily and seasonal temperature variations. Even on the InSight landing site, the Elysium Planitia, the difference in temperature between day and night will be 70°C on average. 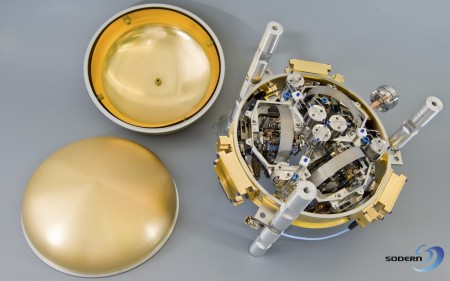 In order to reduce temperature contrasts as far as possible, the seismometer's very broad band pendulums are placed in a highly evacuated titanium sphere.

With a volume of approximately 3 litres (i.e. roughly the size of a watermelon), this enclosure—constructed by the Jet Propulsion Laboratory in Pasadena—comprises two very light titanium hemispheres, laser-welded around a circular ring on which three pendulums (one for each spatial direction) are solidly attached.

The ring is also fitted with a series of vacuum feed-through connectors allowing electrical cables to pass through and a small copper pumping tube used to evacuate the sphere, i.e. to remove the air so the sphere’s contents are kept under vacuum conditions.

During the crucial stage of evacuation, the sphere is first baked to maximize vaporization of compounds that might condense on the inside. The air is then removed using very powerful pumps. Once all the gaseous contents have been evacuated, the pumping tube is crushed using a specially designed crimper to finally hermetically seal the sphere.

Temperature sensors are added for monitoring and diagnostic purposes.

One of the roles of the evacuated sphere is to allow the pendulums to operate in as clean an environment as possible. Slipping into certain places such as the pivot or motion sensing electrodes, a micrometre-sized particle or a sticky film of organic molecules could arrest the delicate mechanisms of a pendulum and paralyse the seismometer. 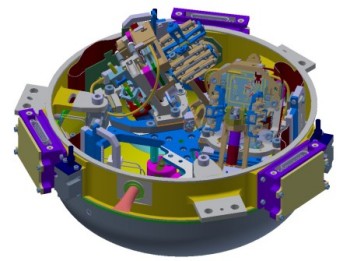 3D representation of the protective sphere around the SEIS seismometer (© IPGP).The vacuum within the sphere eliminates the Brownian motion that would otherwise seriously interfere with seismic measurements. When heated, the innumerable particles (atoms and molecules) that make up the atmosphere jostle randomly and incessantly, rather like dancers in a night club. This is what physicists call Brownian motion.

Some particles would inevitably strike the mobile mass of the pendulums, generating a seismometer signal. This is why it is vital to remove all the gas from the sphere, because evacuation is the only way of eliminating as much of this source of interference as possible.

Although the pressure of the Martian atmosphere is 1/100 that on Earth (less than 10 mbar on Mars as against 1 bar on Earth), it is still too dense for the pendulums. One possible technique would have been to fit the sphere with a filter valve (to prevent the ingress of dust) so as to balance out the pressures inside the sphere and outside in the Martian atmosphere. However, this would not have been sufficient.

Even more importantly, the absence of air in the titanium sphere also provides the pendulums with the best possible isolation from variations in the outside temperature, which is absolutely fundamental for the quality of seismic measurements, especially when it comes to recording long-period waves. This also explains why so many means of insulation are used to protect the SEIS seismometer from fluctuating temperatures. 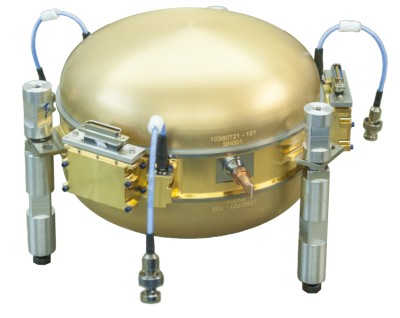 Not only does the titanium sphere provide an evacuated environment for the pendulums, but its internal surface is coated with a very thin layer of thermal insulation. The sphere itself is enclosed in an external insulated shell (RWEB) and, once on the ground this assembly will itself be covered by a substantial wind and thermal shield, or “WTS”.

Over the course of time, the pressure within the sphere will inevitably rise. To keep a check on the pressure inside the sphere, in the absence of internal barometers, there are temperature probes on the pendulums that will allow engineers to assess the quality of the thermal insulation at any given instant, and hence deduce the level of the vacuum within the sphere.

At the start of the InSight mission, just after landing, the pressure in the sphere will be roughly 0.01 mbar. Two Earth years later, at the end of the mission and provided no major leak has occurred in the meantime, the pressure will have risen to around 0.1 mbar, a level nonetheless sufficient to continue making seismic measurements should the mission be extended. 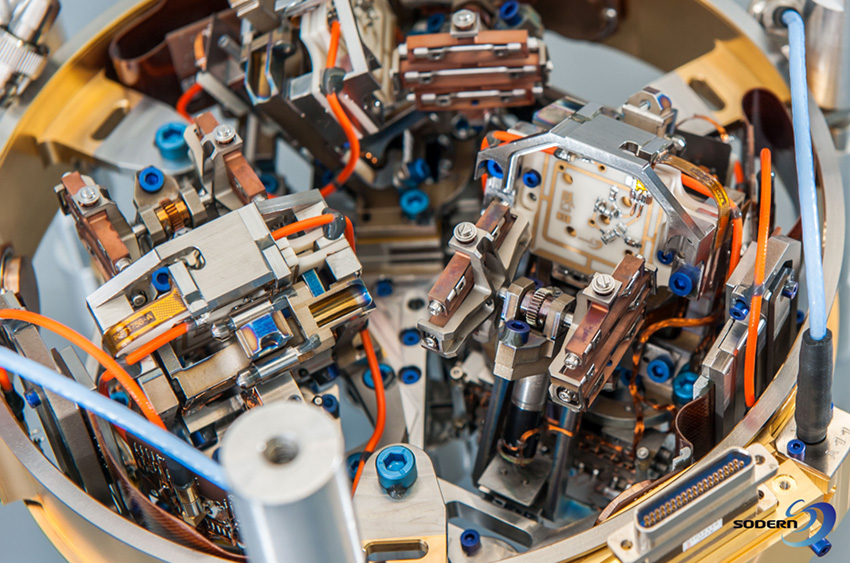 The three VBB pendulums inside the titanium evacuated container (© SODERN).

In order to guarantee that very low pressures in the sphere are maintained, it is also fitted with what are effectively "gas sponges". The purpose of these devices is to trap any gases that might still be present in the sphere after baking and evacuating. They will also absorb any Martian CO2 should a micro-leak appear while on Mars.