One opportunity every 20 years

Martian seismology left on the sidelines

Mars is, without a doubt, the most studied planet in the solar system. Since the start of the conquest of space, a little fewer than 50 probes have been launched from Earth towards our cosmic neighbour. Most have failed to arrive at their destination or have not worked as intended, but over the decades humankind has nevertheless been able to unveil many aspects of this rust-red desert world.

The first flybys by the American Mariner probes in the 1960s gave the first close-up views of the Martian surface, as well as essential data about the pressure and composition of the atmosphere, which turned out to be very thin and unbreathable. In 1971 Mariner 9 was inserted into orbit, a good position from which to make a global survey of the planet. The revelation of gigantic volcanoes, huge canyons and ancient riverbeds held the promise of even more extraordinary discoveries, and the Viking mission was born. Its stated objective was to find traces of life.

The Viking spacecraft, comprising two orbiters and two landers, reached Mars in 1976. The Viking mission remains to this day one of the most ambitious explorations ever undertaken by humankind. This mission revolutionized our understanding of Mars, but paradoxically also put an end to the Martian obsession, or temporarily at least: the biological experiments on board the landers returned no conclusive result.

A unique feature in the history of Martian exploration was that each of the two Viking landers included a seismometer. The instrument on Viking 1 could not be unlocked and remained unusable, but the one on Viking 2 was able to record data. Unfortunately, geophysicists were disappointed as winds disturbed the instrument to such an extent that despite months of observation, no true seismic signal ever reliably emerged from the data collected.

Martian exploration started again properly in 1996, 20 years after the Viking mission. It was a particularly glorious year for NASA, which launched two outstandingly successful missions: Mars Global Surveyor, which orbited the planet, and Mars Pathfinder, which landed a miniature rover for the first time. 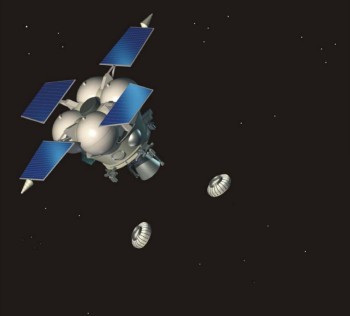 The Pathfinder mission in particular was the focus of an unprecedented media frenzy that took even NASA by surprise. Thanks to the Internet, the whole world was able to follow the first perambulations of the mission's star, the Sojourner rover. Few people knew, however, that the Pathfinder mission was just the tip of a far more ambitious iceberg, MESUR. This gigantic project would have landed no fewer than 16 geophysical stations on Mars, all fitted with seismic sensors. Pathfinder had been designed from the outset as a technology demonstrator for MESUR, and its primary objective had been not to land a small rover, but... a seismometer.

At that time the Optimism seismometer developed at the Institut de Physique du Globe de Paris (IPGP) had been recommended by a review panel of American seismologists. However, this recommendation came to nothing because of technical integration difficulties.

The Russians—also in the race in 1996—were unluckier. The ambitious Mars 96 mission, involving several European laboratories and consisting of an orbiter, two ground stations and two surface penetrators, crashed into the Pacific Ocean shortly after launch.

This was another very serious setback for Martian seismology since the small autonomous stations included in particular the broad band Optimism instrument developed at IPGP, on which geophysicists were counting heavily to help pierce the mysteries of Mars' internal structure.

Several projects were initiated over the years in an attempt to send seismometers to Mars. The French-American NetLander project, designed to land four observation stations on the Red Planet, was shelved in the 2000s even though work was well advanced and the project was at the end of phase B.

The European Space Agency envisaged landing a seismometer on Mars under the ExoMARS programme. Revised several times for technical and budgetary reasons, its objectives became less ambitious and once again, planetary scientists had to reconcile themselves with the cancellation of the Humboldt geophysical package.

However, all the work carried out over the course of the various projects brought to a halt partway through, or failed missions such as Mars 96, was not wasted. The SEIS seismometer on board the InSight probe due to be launched in 2018 represents a legacy going back several decades.

Forty years after the first attempts of the Viking landers and 20 years after the launch failure of Mars 96, InSight will take up the baton once again and may finally give geophysicists the opportunity to pursue their quest to unveil the mysteries of the Red Planet that have lain buried in its impenetrable depths for billions of years. If we look back into the past, it can be seen that Martian seismology has roughly one chance every 20 years. It is both much, and very little. This is not an opportunity to be missed.